It’s no secret that Vivien Leigh’s great beauty and talent have been inspiring artists of all mediums, since she first made headlines in 1935. Words of glory were thrown at her feet; roses and racehorses were named for her; she was photographed, sculpted, painted and forever immortalized. All because of The Mask of Virtue.

It is an agreeable task to be able to welcome a new actress with unrestrained praise. ‘The Mask of Virtue’ obtained a personal triumph for Vivien Leigh, a discovery of Sydney Carroll. Miss Leigh is ravishingly pretty, which might not matter, but that her talent equals her beauty. She moves with grace. She is lovely in repose. Her voice is most attractive, and warmth, ardour and sincerity are not wanting in her acting. Vivien Leigh gave genuine life to the part of the girl, enchantingly reconciling her conflicting qualities. Her quiet dignity in the acceptance of a repugnant task, the growth of affection and the awakening to the sense of a triumph odious to her, were beautifully expressed and composed a performance that grew in loveliness and interest. –A.E. Wilson, The Star, May 1935

In this series of Vivien Leigh as Muse, we’ll first look at a few of the items Sotheby’s will be auctioning on Tuesday, September 26th. Among the Sotheby’s items are photographs, caricatures, sketches and paintings of Vivien Leigh.

Edzard was a German born painter, who later moved to Paris and painted in the style of French Impressionism. Author Gerd Muehsam describes his style perfectly: Edzard has captured in his canvases the charm of the Parisian atmosphere. With the light, vibrant touch of his brush, he produced sparkling, and yet delicate, paintings of beautiful women, dancers and flowers. His brilliant delineations of circus life and the theatre, his spirited portrayals of Parisian cafe scenes have made him a favorite of art circles in this country and abroad. Edzard’s buried at the Père Lachaise cemetery in Paris.

In July, 1935, a reporter happened to come across Vivien Leigh, in the Leicester Galleries. She was standing in front of her portrait. Vivien shared with the reporter that Mr. Edzard had painted her from sketches he’d made, while watching her perform in the play, The Mask of Virtue. In addition to the sketches, The Daily Express reported that Vivien sat for Edzard twice. Coincidentally, Vivien was also painted by Suzanne Eisendieck, who later married Edzard in 1938.

These next two art pieces are by Roger Furse. Roger Furse was a well-known friend and collaborator with both Vivien Leigh and Laurence Olivier. Depending on the project, he acted as set designer, costume designer and production designer. He worked on several of their plays and movies. Some of their collaborations include: Antony and Cleopatra, Caesar and Cleopatra, Macbeth, The Skin of Our Teeth, Duel of Angels, The Roman Spring of Mrs. Stone, The Prince and the Showgirl, Richard III, Spartacus, Henry V and Hamlet.

This charming sketch of Vivien Leigh, by Roger Furse, is from the upcoming auction. Sotheby’s lists it as A Sketch From the Doctor’s Dilemma, 1941. Furse signed the bottom of the sketch, with the following: Wishing you a great success, dear Vivien, Roger. It’s pencil on paper and is 12 inches by 8.5 inches. The selling estimate is $800 to $1,100 (Sotheby’s pdf catalog, page 26). 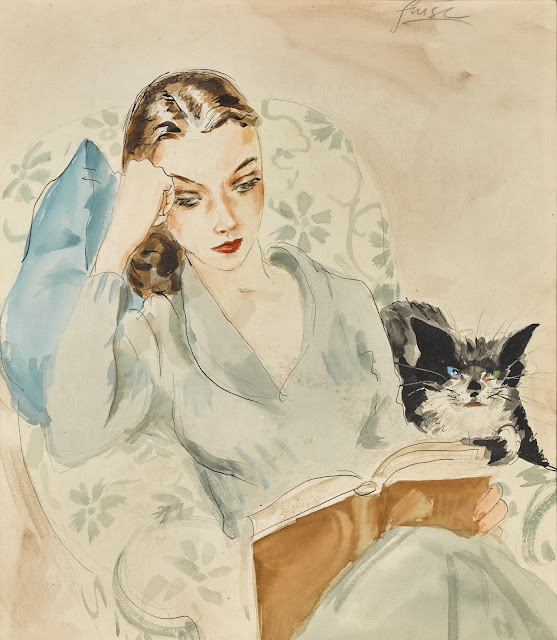 I love how Furse took care to note Tissy’s different eye color. Vivien’s fur baby really did have one green eye and one blue eye!

Roger Furse and Vivien Leigh remained lifelong friends. In 1966, she travelled to Corfu, Greece, where Roger greeted her as she disembarked. She had come to look at land parcels as she was thinking of building a home near Benitses. Furse lived nearby with his second wife, Ines (pictured below).

Cecil Beaton was another well known collaborator of Vivien Leigh and Laurence Olivier’s. Beaton had been photographing Vivien Leigh since the 1930s. In addition to being a photographer, Beaton also designed sets and costumes. A few of his collaborations with Vivien included Caesar and Cleopatra (film version), Anna Karenina and The School for Scandal.

Sotheby’s is having a special sale on portraits of Vivien Leigh, from The Cecil Beaton Studio Archive. The prices start at £3,000. Here are two samples from that sale. Follow this link for all the details.

Beaton said of Vivien, Vivien is almost incredibly lovely. Hollywood is at her feet. She is madly in love with her husband – who adores her… Her former husband dotes upon her & adores her still – she is unspoiled – has many loyal friends & only ambition to improve as an actress. The adulation of her beauty leaves her cold.

Beaton was also a frequent visitor to Notley Abbey, writing, The life they lead in the country is most suitable for Shakespearean actors. The whole atmosphere of the place is suitable for giving performances of Twelfth Night, A Midsummer Night’s Dream and Hamlet.


Vivien is pictured in my favorite costume from Anna Karenina. In this photograph, Vivien’s wearing a short waisted jacket, made from white silk and black velvet. Below the jacket is a white skirt, featuring multiple layers of organdy. The photos of Vivien, by Beaton, in this particular outfit, are my favorites from the film. To read more about the costumes of Anna Karenina, please click here.

Thanks for joining me today!
Michelle