Wedding bells rang for Suzanne Holman, the only child of Vivien Leigh and her first husband, Leigh Holman, on Friday, December 6th, 1957. The lucky groom was Robin Farrington, a 29 year old insurance executive.

Robin, on meeting Vivien Leigh for the first time, said,  “I was very nervous, and as she came into the drawing room I walked forward to shake her hand. Unfortunately, the cat inserted itself onto my toe and I have never done such a good rugger conversion. The cat flew across the room. It was a very bad beginning.”
﻿﻿

Hundreds of wedding invitations were sent out to family, friends and colleagues. The invites read:
Mr. Leigh Holman and Lady Olivier request the pleasure of your company at the marriage of their daughter Suzanne Mary Holman to Mr. Robin Neville Farrington, at Holy Trinity, Brompton, on Friday, December 6th at 3pm and afterward at [the Hyde Park Hotel for the reception].

Recipients were asked to RSVP to Lady Olivier at her Lowndes Cottage, in London.
﻿﻿ 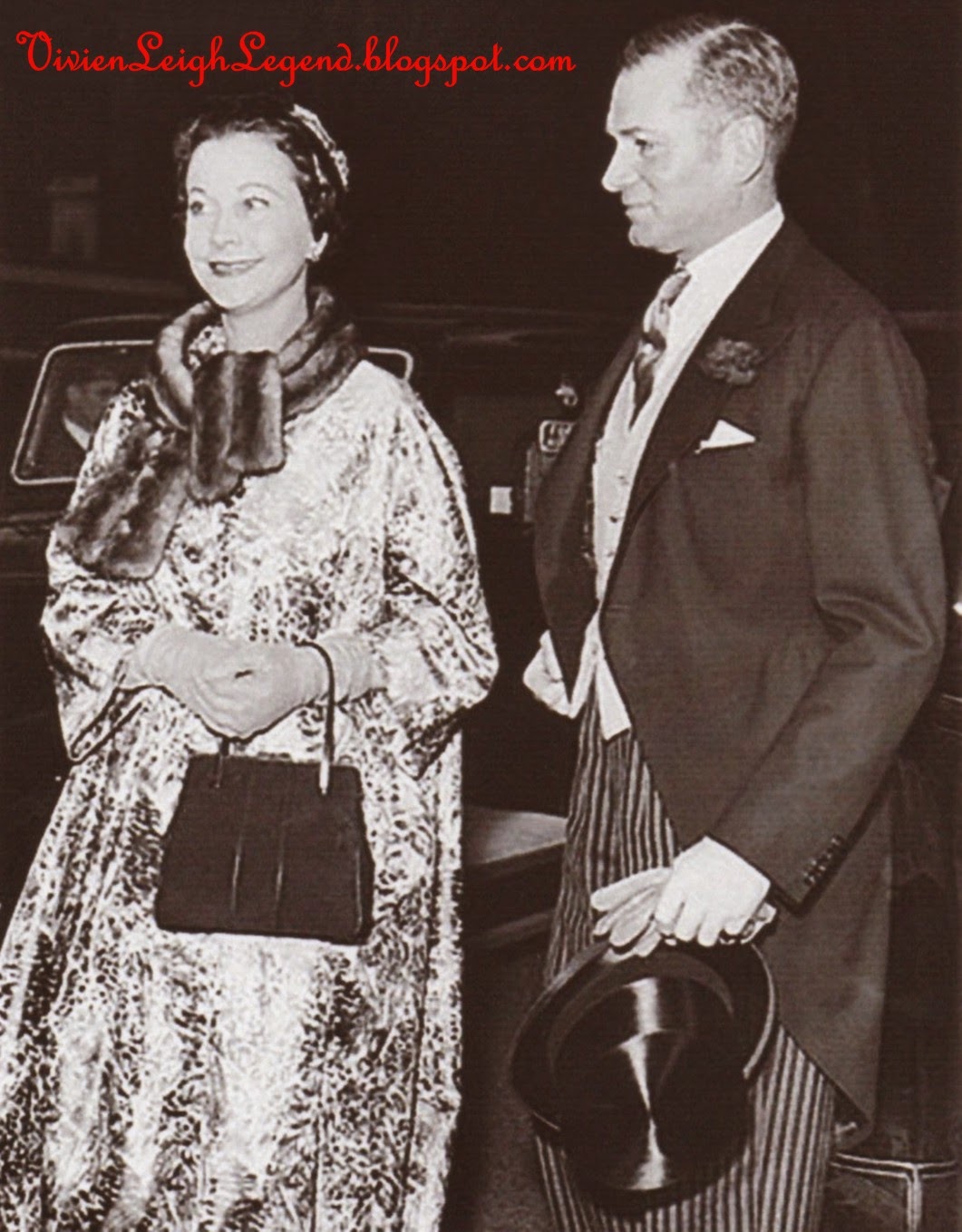 The bride wore a long-sleeved, chapel train wedding gown, with a slight V-neck. The dress featured bows on both the right and left sides. Her short, curly hair was topped with a small circular crown, trimmed in white flowers, with a long veil attached. Suzanne’s father walked her down the aisle as approximately five hundred wedding guests looked on; the bride’s face covered by her veil.

Suzanne carried a cascading bouquet and what appears to be a small bible during the ceremony.

After the wedding, guests were invited to attend the reception at the Hyde Park Hotel. Since this was an afternoon wedding, only champagne was served at the reception, and of course, wedding cake.

Vivien wore a leopard-pattern coat, topped with a fur scarf. The pattern had been hand-painted onto the silk coat. One newspaper said that Vivien’s outfit put all the mink coats and smart costumes in the shade. The gentlemen were dressed in morning suits with striped pants, light colored vests and dark jackets.

The newspaper reporters made quite a fuss over the fact that Sir Laurence attended. At the reception, Olivier stayed in the background and was quoted as saying, “I’m staying out of the limelight on this occasion. This is Suzanne’s day. She and her mother and her father are what you might call ‘on-stage.’ I’m just taking it quietly in the wings.”

Suzanne was quite happy that Sir Larry attended, “I’m so glad that both my father and stepfather came. I don’t find it at all unusual, just very good fun.”

Suzanne and Robin enjoyed a long union and remained married until Robin’s death in June, 2002, leaving Suzanne a widow. Together, they raised three sons and were grandparents several times over.