Grace Kelly, a Hollywood actress known for her beauty, first met her future husband in May, 1955 at a photo shoot arranged by the studio. He was Prince Rainier III of Monaco, the reigning monarch of a country comprised of 370 acres and from one of the oldest royal families, the Grimaldis. Eleven months later, on April 19, 1956, the couple were married in a religious ceremony at St. Nicholas Cathedral by the Bishop of Monaco.
﻿

“I don’t want to be married to someone who feels belittled by my success,” she once said. “I couldn’t bear walking into a restaurant and hearing the maitre d’ refer to my husband as Mr. Kelly.” 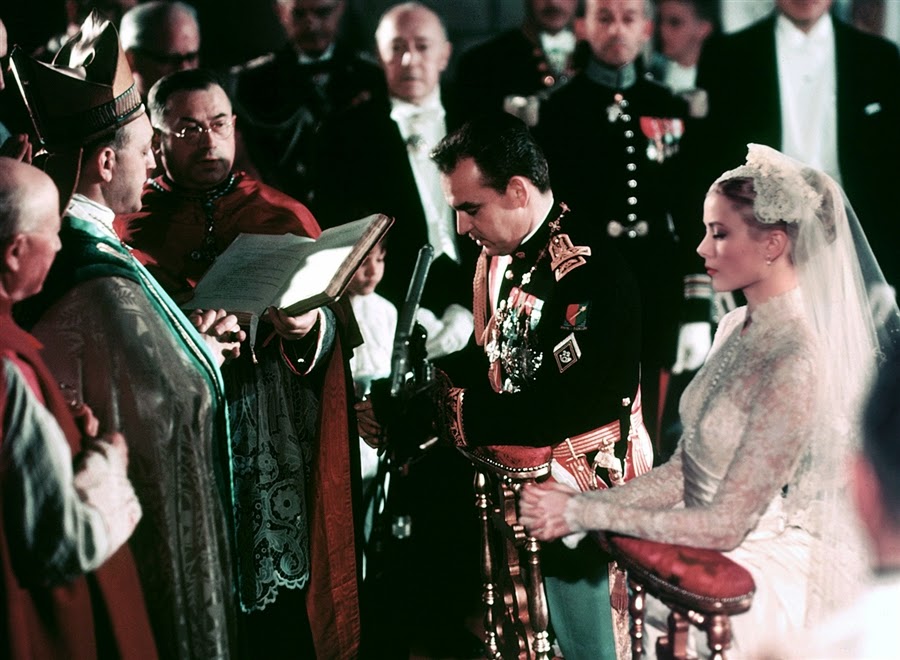 Grace Kelly’s wedding dress was designed by Helen Rose, a costume designer for MGM. Helen Rose had previously designed costumes for Miss Kelly for her movies, High Society and The Swan. Also on hand from MGM’s staff, was hairdresser Virginia Darcy. 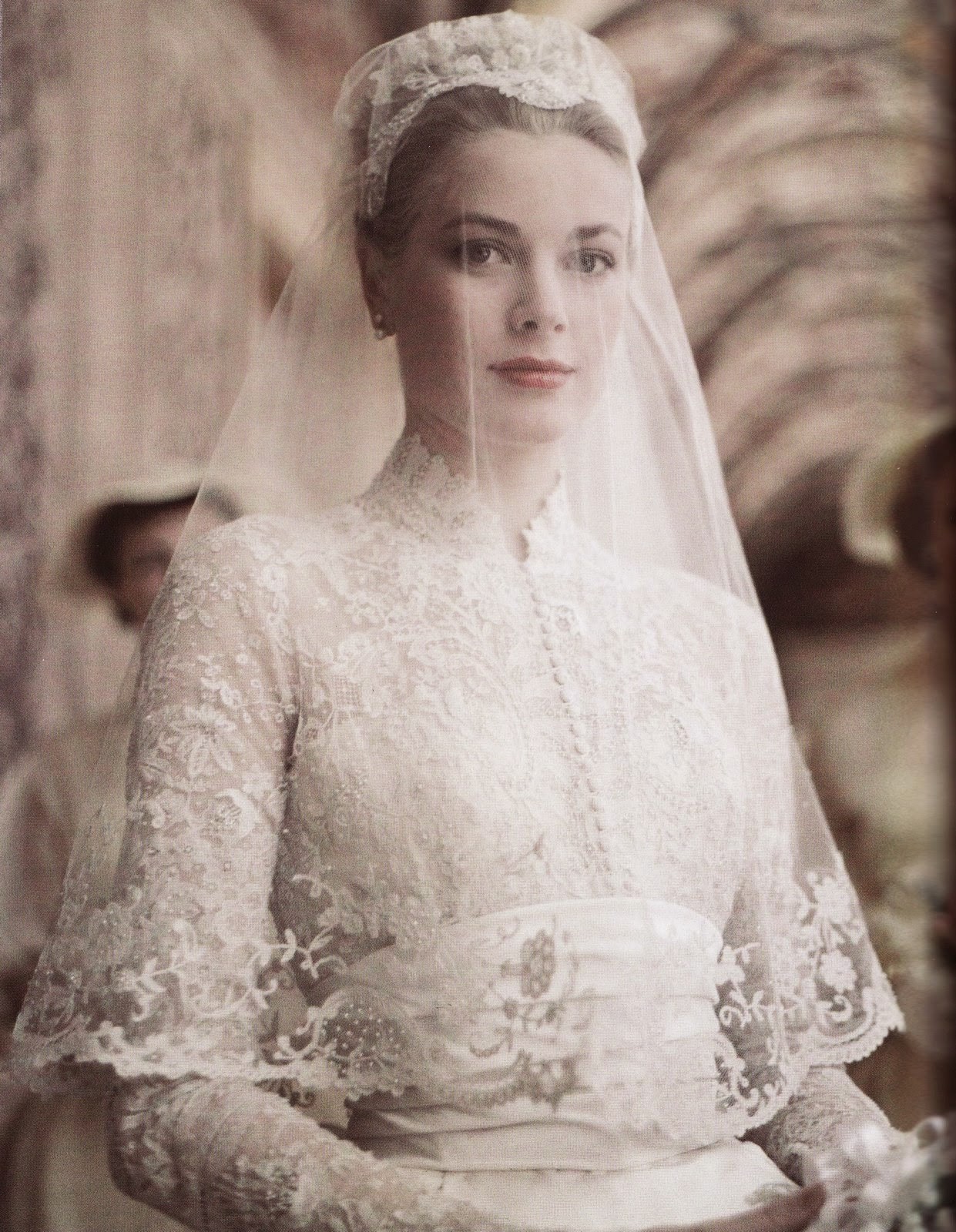 Seamstresses hard at work on Miss Kelly’s wedding dress and veil. The dress would be comprised of 100 yards of silk net, 25 yards of silk taffeta, 125 year old lace purchased for the occasion and thousands of tiny beads and pearls. 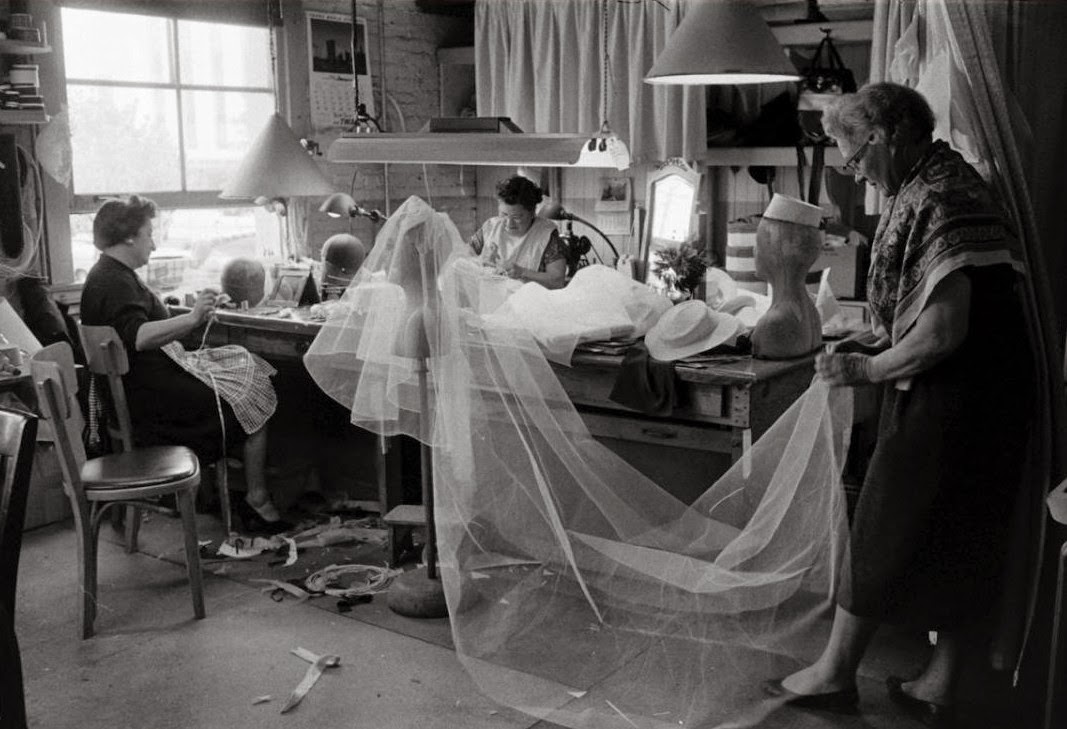 The wedding dress was later gifted to the Philadelphia Museum of Art by Princess Grace. The following description can be found on their website:

“From the crownlike wreath topping the headpiece to the bows down the back of the graceful train, Grace Kelly’s wedding ensemble is simple but exquisitely detailed. Delicate rose point lace, a type of nineteenth-century Brussels needle lace that features elaborate floral motifs, forms the bodice, which appears seamless because the lace motifs were detached from their original ground and pieced together to follow the shaping of the dress. Touches of the lace, accented with lustrous seed pearls, unify the gown and accessories. The dress itself is constructed in four complex parts: the lace bodice with an attached underbodice, skirt support, and slip; a heavily pleated silk faille skirt that incorporates a smoothing petticoat, ruffled petticoat, and foundation petticoat; a triangular tulle and lace train insert; and a pleated silk faille cummerbund. 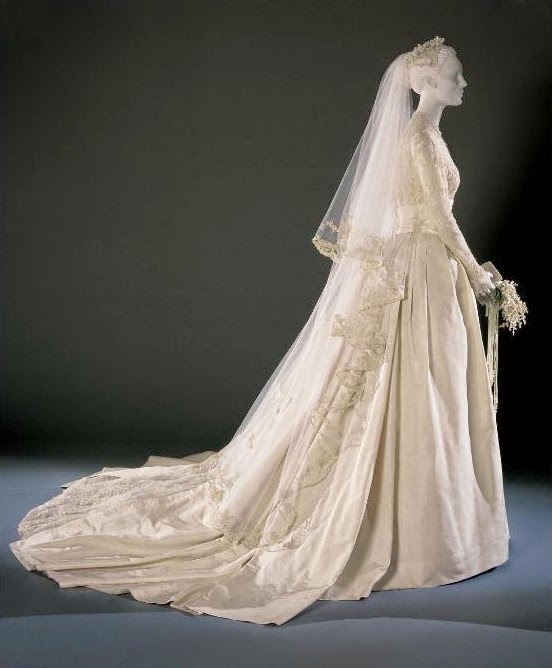 In style and detail the dress was conceived to complement the “fairy-princess” image of the bride. Above a bell-shaped skirt of ivory peau de soie supported by three petticoats, a high-necked bodice of Brussels lace was re-embroidered so the seams would be invisible and then accented with seed pearls.” 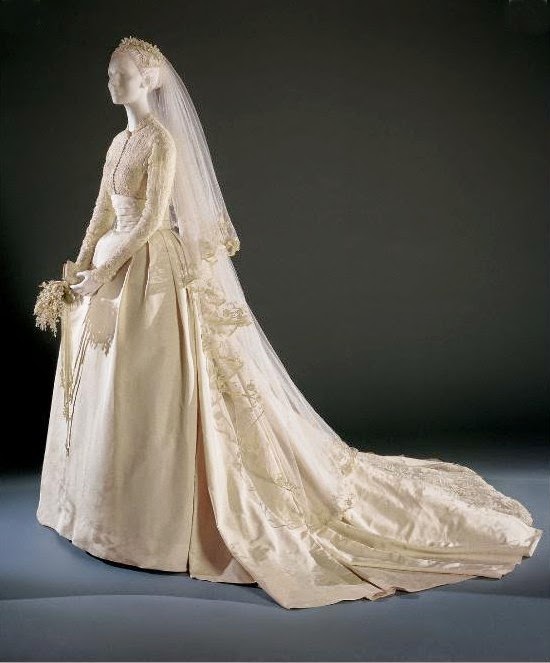 Pearl-embellished lace also covers the prayer book, shoes, and cap, which is surmounted by an orange-blossom wreath. The circular silk net veil, especially designed so that the bride’s face could be seen, is decorated with appliquéd lace motifs including two tiny love birds. H. Kristina Haugland, from Philadelphia Museum of Art: Handbook of the Collections (1995), p. 100. 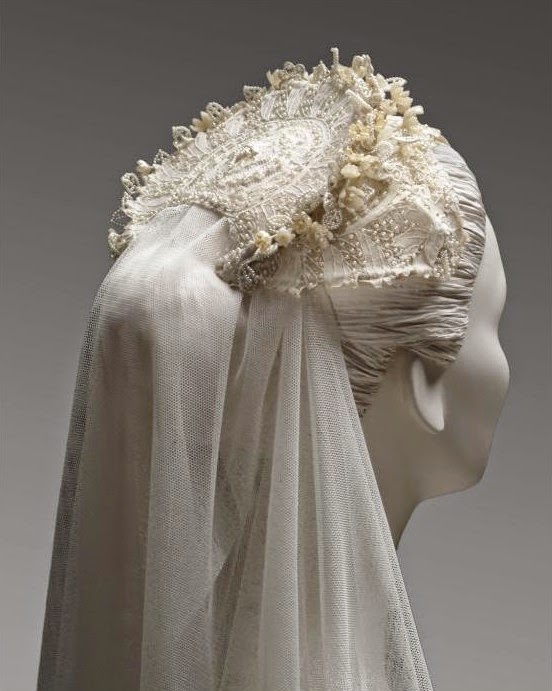 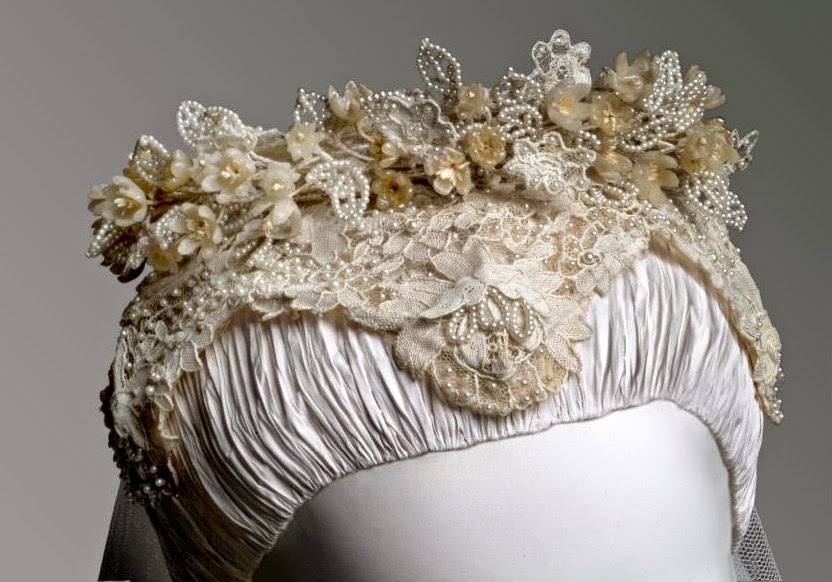 The shoes were designed by David Evins. They were made from leather and accented with seed pearls, glass beads, silk lace and silk faille. Check out Grace’s name inside the shoe. 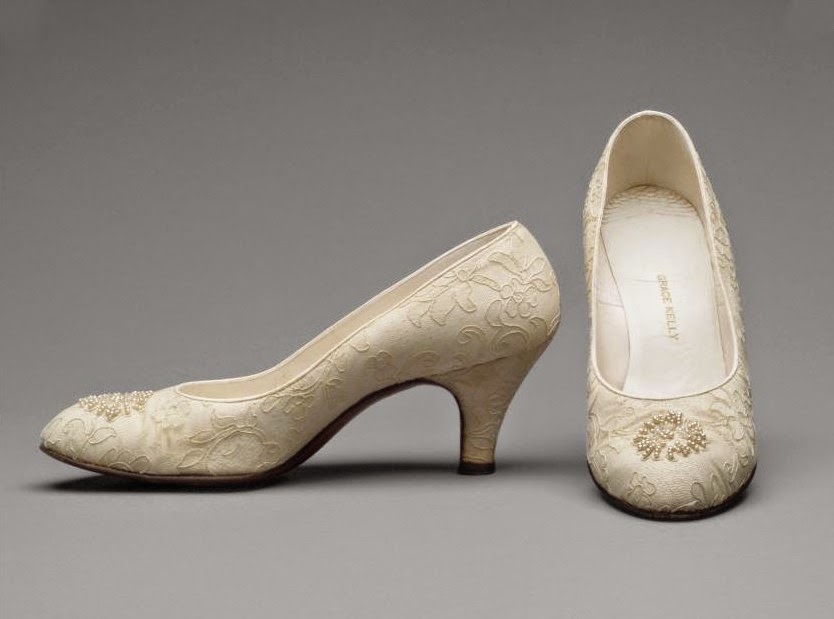 “On her wedding day, Grace Kelly carried a small bouquet of lilies of the valley and this specialized missal, whose full title is Bride’s Manual: A Manual of Catholic Devotion with Mass for the Marriage Ceremony and the Nuptial Blessing. The gilt-edged book, filled with prayers, hymns, meditations, and information in accordance with recent pontifical decrees, was a gift to the bride from a longtime friend of the Kelly family, Mrs. John F. McCloskey of Chestnut Hill. It was sent to Metro-Goldwyn-Mayer to be decorated with silk, lace, and seed pearls to match the wedding dress.” -Philadelphia Museum of Art 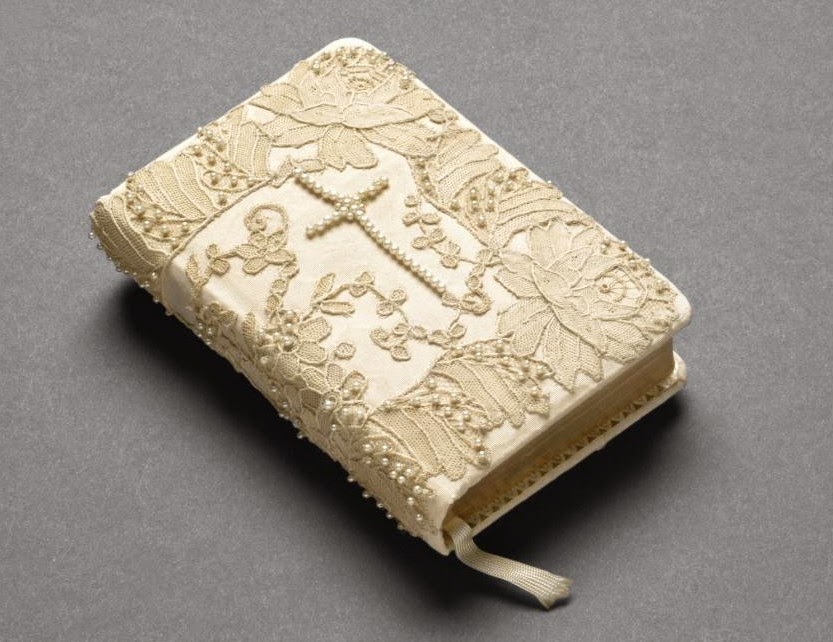 Grace’s sister Peggy was the matron of honor and there was an additional six bridesmaids along with four young ladies and two young gentlemen as wedding party attendants. 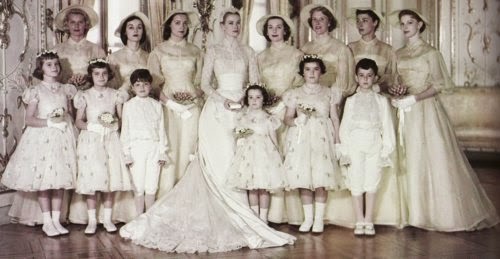 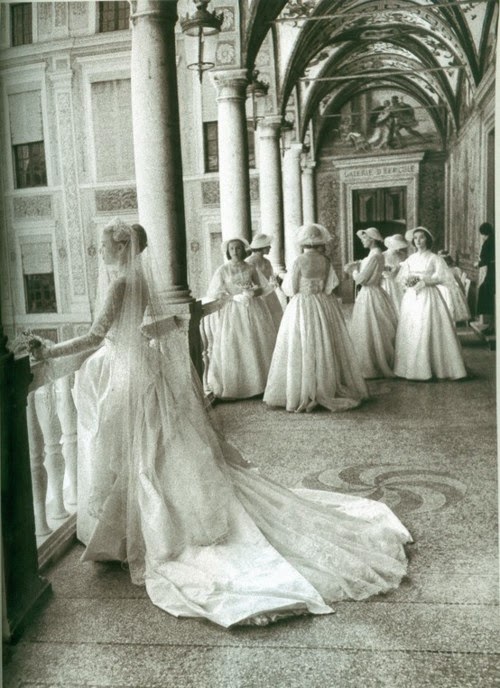 The bridesmaids’ dresses were yellow organdy and designed by Joseph Hong for Neiman-Marcus and made by Priscilla of Boston. 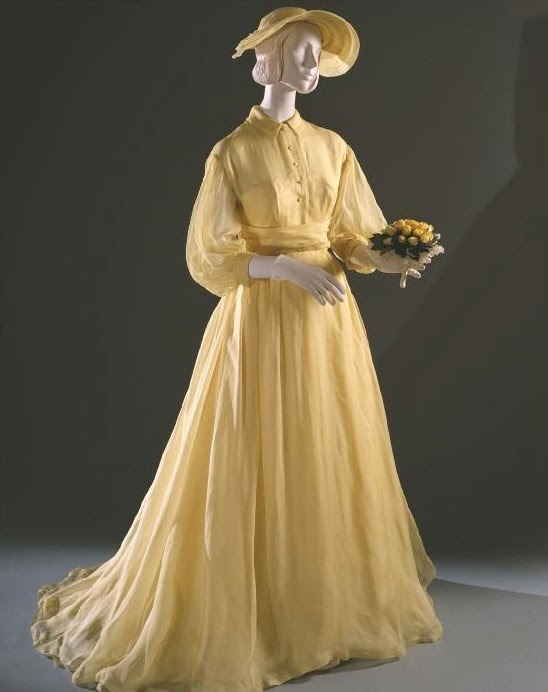 “The bride’s favorite color, yellow, was chosen for the bridesmaids’ dresses; the shade, called “Sunlight,” provided a pleasing contrast to the grayness of Monaco’s cathedral. Made of sheer silk organdy over a built-in strapless taffeta underdress, the dress features a high neck, pleated sash, full bishop sleeves, and a wide, petticoat-supported skirt that flows gracefully into a short train. 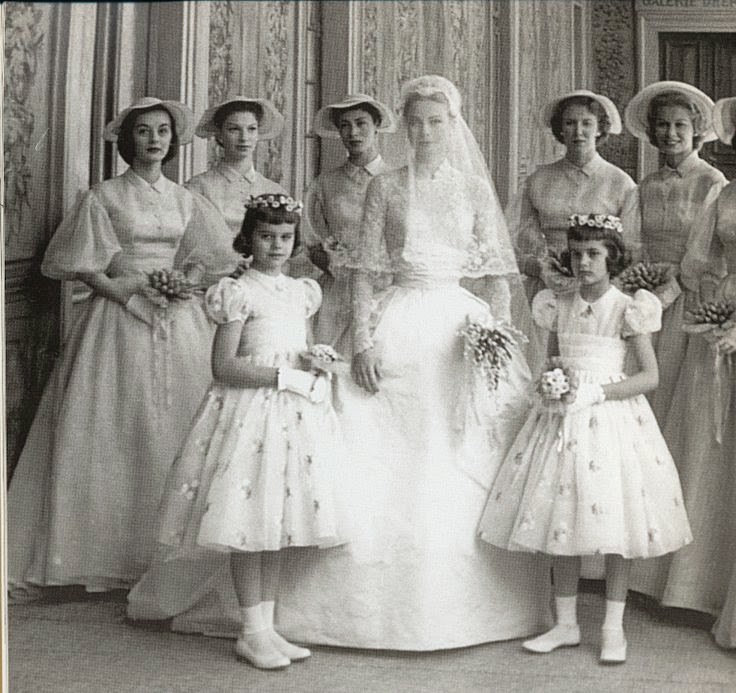 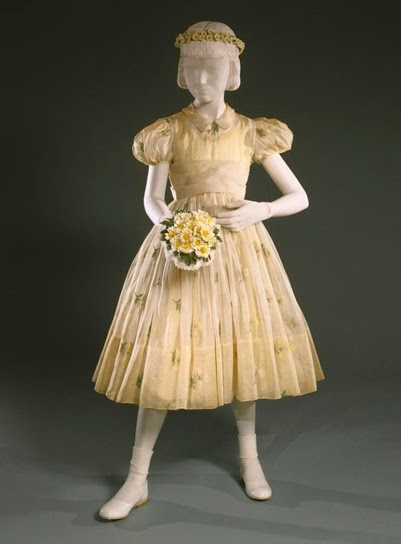 “This dress, worn by Grace Kelly’s oldest niece, is supported by a yellow organdy underdress with three skirts. Sprigs of machine-embroidered daisies enliven the sheer white organdy fabric, and the daisy theme was continued by the small daisy bouquet and by the halo of daisies, which was substituted for the hat depicted on the flower girls in the original design.”  -Philadelphia Museum of Art 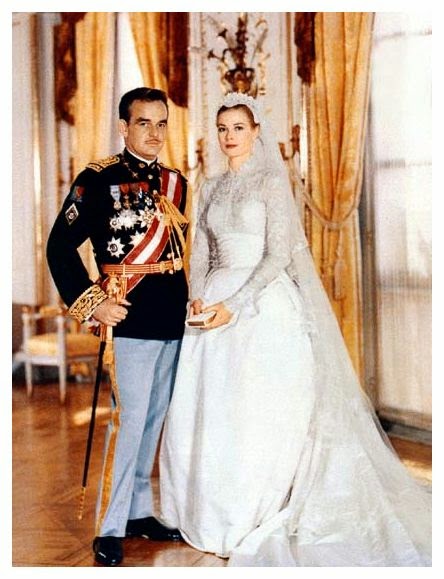 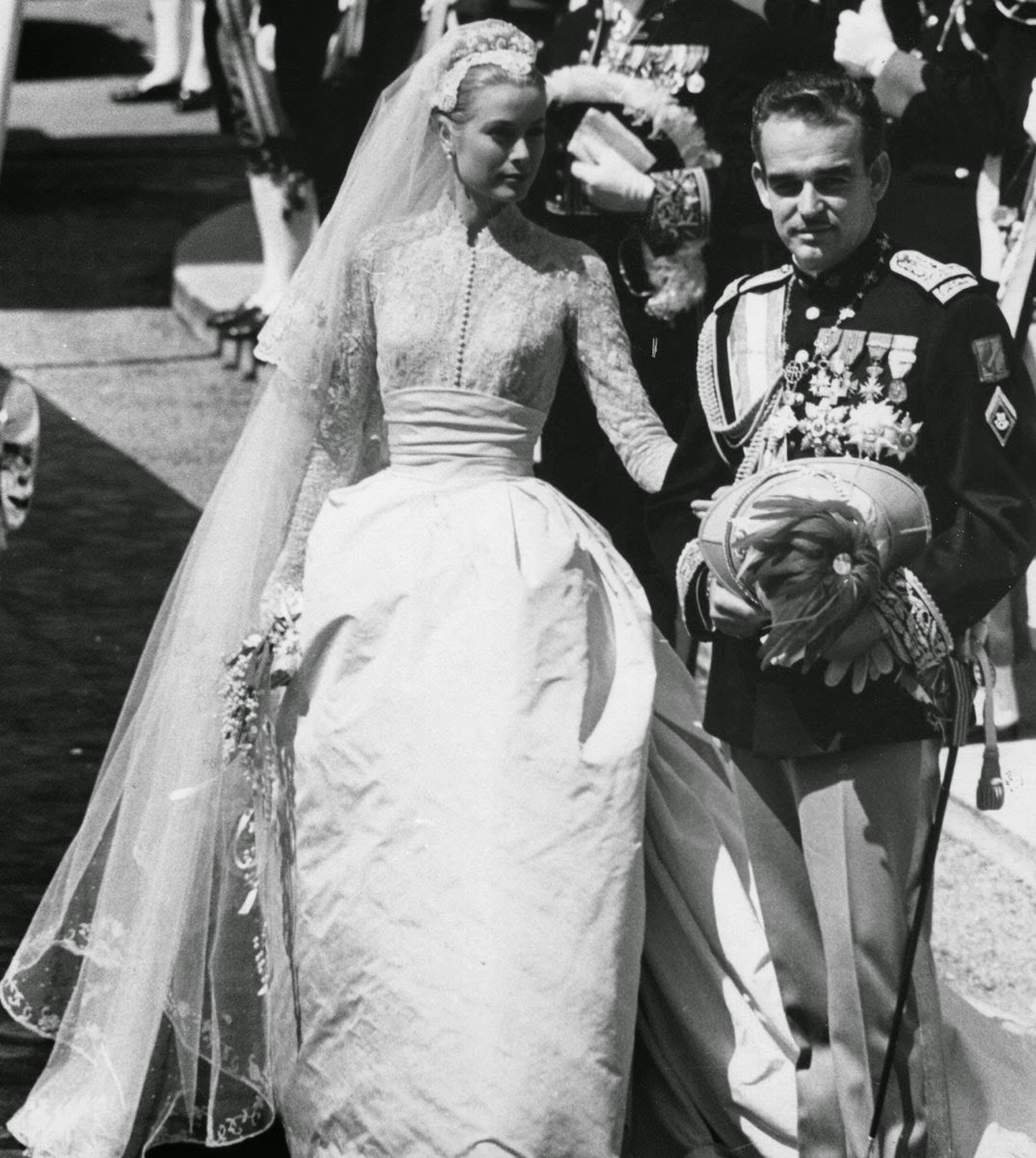 Prince Rainier wore his royal uniform of Monaco complete with sword, which they later used to cut their multi-tiered wedding cake. 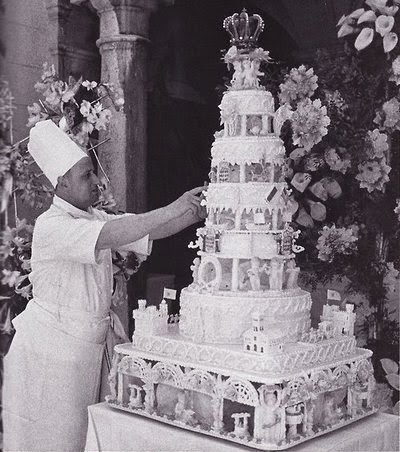 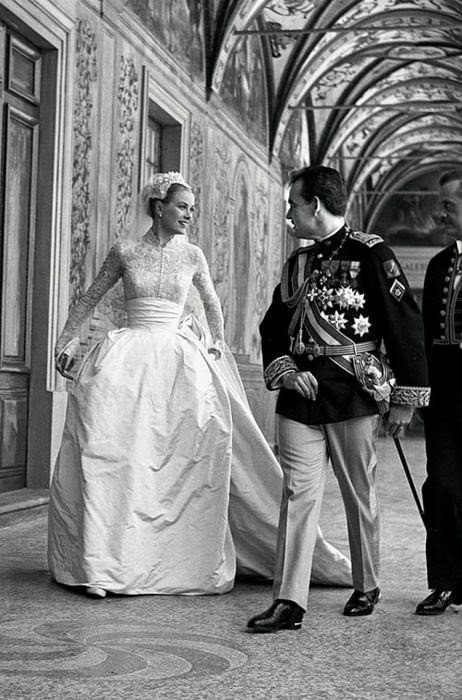 The happy couple were driven through the streets of Monte Carlo in a Rolls Royce convertible as thousands of well-wishers lined the way for the newlyweds. 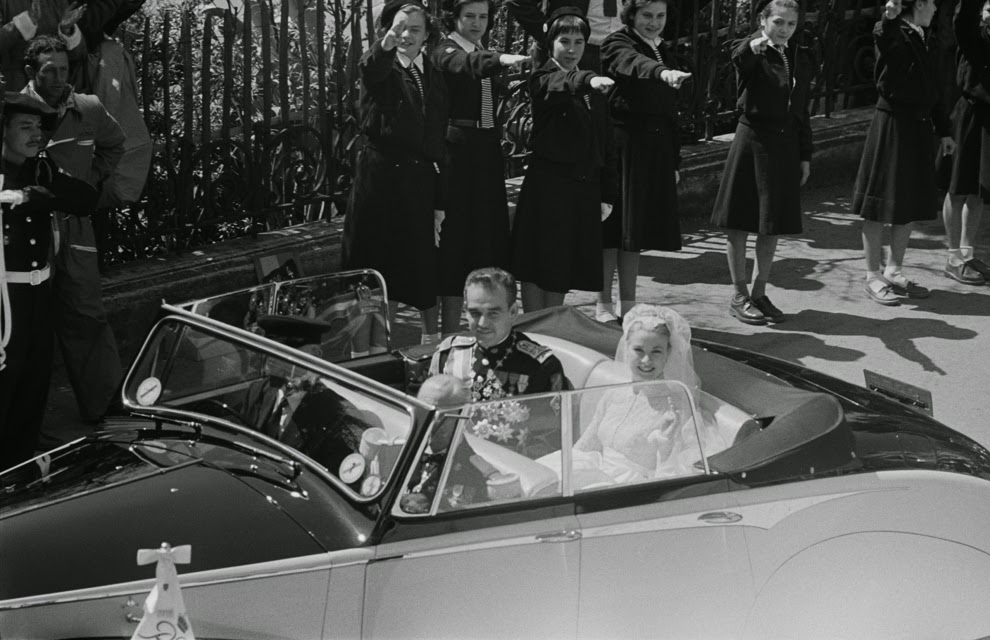 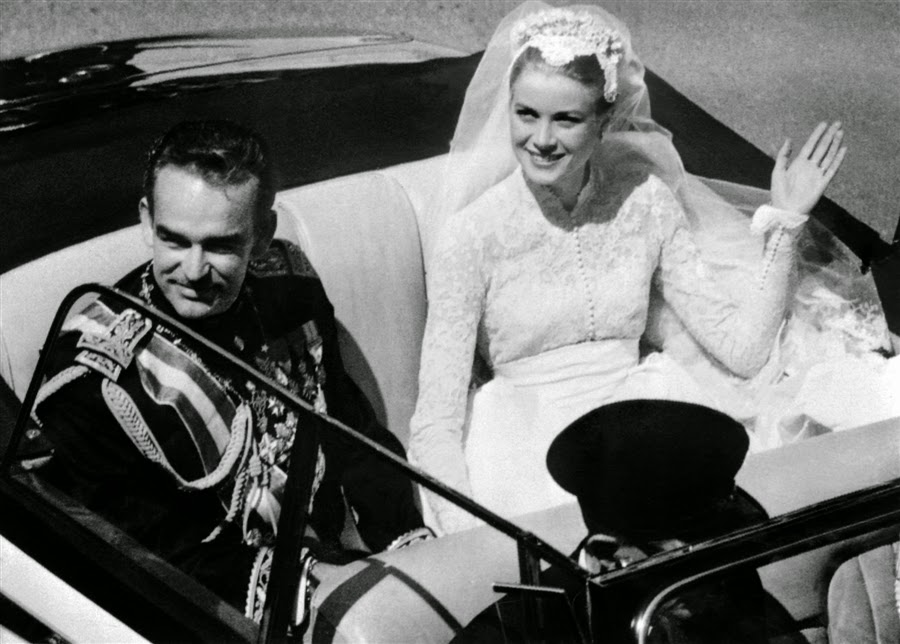 Prince Rainier and Princess Grace remained married until her untimely death in 1982 from an automobile accident. Prince Rainier never remarried and passed away in 2005. The couple had three children: Caroline, Albert and Stephanie.
Thanks for your visit today. Please join me next Sunday for another Vintage Bride.
Previous