Versatile Laurence Olivier Stars With Vivien Leigh In “21 Days Together”
Laurence Olivier, whose latest success is as Larry Darrant in “21 Days Together,” was born on May 22nd, 1907, in Dorking, Surrey, where his father was a clergyman. Laurence’s early education was for the ministry, as it was thought that he would follow in his father’s footsteps. The Rev. Gerard Olivier was interested in the drama, and he took his small son to see all the great stage celebrities of the day.

His early schooldays were spent at a choir school in London, from where he went to St. Edward’s, Oxford, and he distinguished himself there in pre-clerical subjects. He had become interested in the stage when his father took him to the theatre, and as he grew older and studied the personalites of the various people with whom he came in contact, he longed to dramatise the different characters he met. Eventually he told his father that he wanted to go on the stage. Some clerical fathers might have been upset to hear their son express such a wish, but the Rev. Olivier promptly transferred his son from the pre-ministerial St. Edward’s to the Central School of Dramatic Art. His ministerial studies had groomed Laurence well in English and vocal training, and he had made one appearance on the stage when he was fifteen years old, at the Shakespearean Festival Theatre in Stratford-on-Avon; in a special boys’ performance of “The Taming of the Shrew.”

On London Stage
Before his period of schooling was over, he had played on the London stage. One of the early engagements was with the Birmingham Repertory Company, and he also toured in “The Farmer’s Wife.” Prior, to this, he had had a very lean time trying to convince casting agents that he was an actor His money got as low as seven shillings and sixpence and he was faced with a bill for a month’s rent. He was determined to make good on his own and refused to ask his family for any financial help. Sybil Thorndike, who had known him as a child, secured a walking-on part for him. To gain experience he played in Sunday night shows whenever the opportunity presented itself. Even when important parts came his way, Laurence still played in as many Sunday shows as possible, and among them he created the part of Captain Stanhope in R. C. Sheriff’s “Journey’s End.” When the play was put on at a public theatre he was offered the role, but he chose another offer which had come his way, that of playing the lead in Basil Dean’s production of “Beau Geste.”

Two of Laurence Olivier’s early stage roles were in Shakespearean productions and today the immortal bard is his favorite playwright. He feels, however, that Shakespeare’s work can never be suitably adapted to motion pictures. His only experience with Shakespeare off the screen was as Orlando to Elizabeth Bergner’s Rosalind in “As You Like It.” He has, of course, played many Shakespearean roles on the stage, and critics have said that these have made him the superb artist that he is.

Visits America
In l929 he paid his first visit to America, playing the role of Hugh Bromilow in “Murder on the Second Floor.” He made a sensational success in New York in this play, and it brought him many film offers, all of which he turned down. When he was back in England, however, he decided that he would have a try at a film career. His first picture was made in Germany and it was entitled “The Temporary Widow.” He always smiles when he recalls his first day’s work at the studio.

He then played in the British films, “Too Many Crooks” and “Poliphar’s Wife,” and while he was experimenting with picture work he was still carrying on his stage career. It was about this time that he played in “After All,” with Elissa Landi, and “Private Lives,” with Noel Coward and Gertrude Lawrence. When the latter play went to New York, Laurence and Jill Esmond, to whom he was then married, went too. They were seen by screen talent scouts and were signed to go to Hollywood. Laurence’s first American film was “Friends and Lovers.” Then came “The Yellow Passport,” in which he renewed acquaintance with Elissa Landi, followed by “Westward Passage,” with Ann Harding.

Numerous Films
He returned to England at two days’ notice in order to play opposite Gloria Swanson in her first British picture, “Perfect Understanding.” Shortly after this he was signed to play opposite Greta Garbo in “Queen Christina,” and he dashed off to Hollywood once more, only to find that the role had been given to John Gilbert. So back he went to England. His films since then have included “No Funny Business,” “Moscow Nights,” “Fire Over England,” “The Divorce of Lady X,” “Q Planes” and “21 Days Together.”

He went back to America to play the part of Heathcliff in “Wuthering Heights,” after which he was sensationally successful on the Broadway stage opposite Katharine Cornell in “No Time For Comedy.” His performance in Wuthering Heights,” witnessed by producer Selznick, led to his casting in the part of Maxim de Winter in Rebecca,” followed by “Pride and Prejudice.” Olivier has brown hair and eyes and is five feet ten inches in height. His marriage to Jill Esmond ended in divorce early last year, and soon afterward he was married to Vivien Leigh. He has always been studious, and while not at work on stage or screen he continually reads. He is an ardent devotee of gardening, at which occupation he takes most of his outdoor exercise. He does, however, also swim and ride.

Versatile Actor
Laurence is a versatile actor. He can play irresponsible youth, romantic leading men and tragic roles with equal ease. Despite the fact that he has gained great success with one or two gloomy roles, he would prefer to play comedy. Give him a gay part any day, he says.

He is rather a silent individual, but nobody at the studio ever accuses him of being “high hat.” In fact, he has his prankish moments. He is not a bit interested in seeing his name constantly in the papers; in fact, he will tell newspaper men, whenever they endeavour to interview him, that he is a boring fellow. He refuses, too, to go to places where the publicity people feel he ought to be seen because press photographers will be lurking around. The publicity department at the studio finds him quite a difficult problem at times. 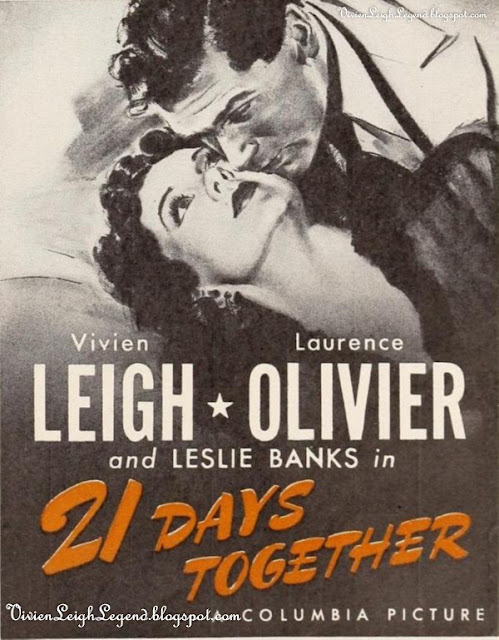 In “21 Days Together,” which commences a Hobart season at the Strand Theatre next Friday week, Olivier is co-starred with Vivien Leigh. Taken from the exciting works of John Galsworthy, the film has been described as one of the year’s best romantic dramas.

How Shakespeare's Skull Was Stolen