For my entry, I’ve chosen to write about Summertime, a bittersweet, romantic movie from 1955, directed by David Lean. The film’s based on the play, The Time of the Cuckoo, by Arthur Laurents and was adapted for the screen by Lean and H.E. Bates.

Summertime, also known as Summer Madness, premiered in June, 1955 with the first opening in Venice and the second opening in New York City. The NYC premiere was held at the Astor Theater with approximately 1,300 people in attendance. A large crowd gathered outside the theater to catch glimpses of the stars as they arrived. 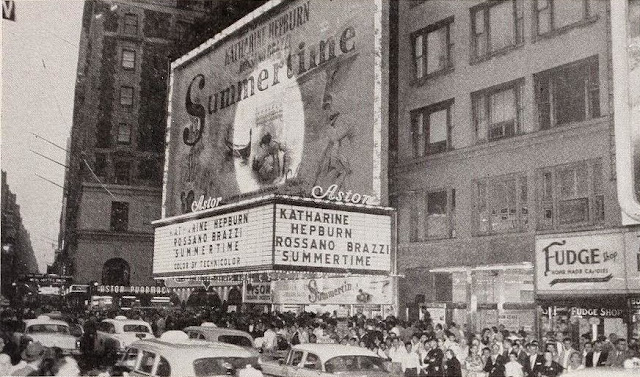 There are many reasons to love this movie, which is set, and filmed entirely, in Venice, Italy. The cinematography by Jack Hildyard almost plays like another character as he adroitly captures Venice and all her charm with vistas of centuries old buildings that sit alongside the city’s watery veins. Then there’s the movie’s brilliant soundtrack by Alessandro Cicognini, which is perfectly scored, and haunts the viewer at all the right moments. 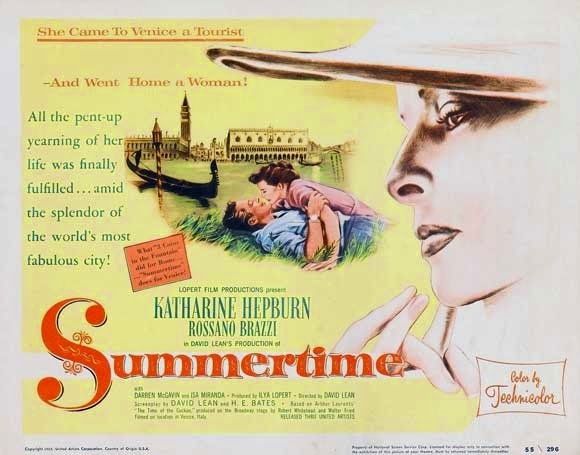 Katharine Hepburn plays Jane Hudson, an unmarried, middle-aged, ‘fancy secretary,’ from Akron, Ohio. Jane’s been saving quite awhile for her first trip abroad and the movie opens with her arriving in Venice by train. Her excitement is palpable. She’s drunk with delight, giddy for Venice and for some romance in her ordinary life. She’s in love with the idea of being in love and is “looking for a wonderful, mystical, magical miracle.” But as she later finds out, sometimes miracles “need a little push” in order to happen.
Jane’s staying at Pensione Fiorini, run by the widow Signora Fiorini, played by Isa Miranda. Other guests include an American couple Jane met earlier en route to the Pensione: Lloyd and Edith McIlhenny (MacDonald Parke and Jane Rose). They are a little crass and Venice is but one European stop of many for them. The other couple we are introduced to are the Yaegers (Darrin McGavin and Mari Aldon); Eddie’s an artist and his wife, Phyl, likes to shop. 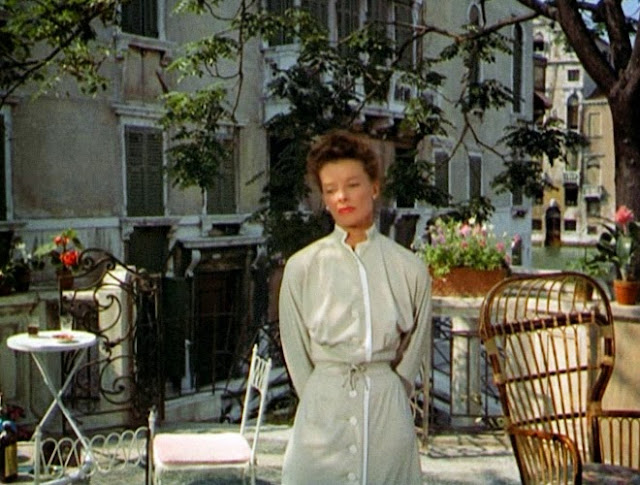 We feel Jane’s first stirrings of loneliness at the Pensione as the two couples and the landlady all have dinner plans and no one wants to have a quick drink with her. She’s left alone on the terrace and the film’s music invades the viewer, giving Jane’s loneliness a life of its own. The large terrace, with its multiple seating areas, is used as backdrop in several scenes to showcase Jane’s solitary existence. 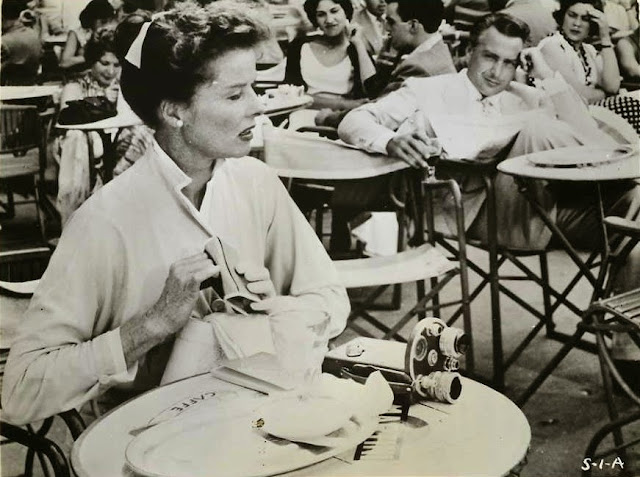 Jane ventures out by herself to Piazza San Marco, where she finds herself slightly shocked at the forwardness of some of the young men. It’s here in the Piazza that we have our first glimpse of Renato di Rossi (Rossano Brazzi), an antiques dealer with a shop nearby. She catches him admiring her and becomes embarrassed by his attention. Unnerved, she fumbles for her sunglasses and il conto. 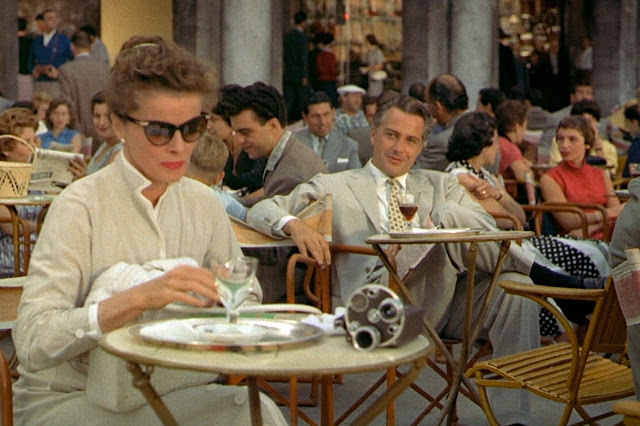 The next day, Jane is out sightseeing and is drawn to a shop with a ruby red goblet in the window. The shop is Renato’s. Later, that night, they meet again at Piazza San Marco. Romance is about to enter Jane’s life. No more lies to her married friends at home: “This time we’d be a quartet [instead of a trio].” 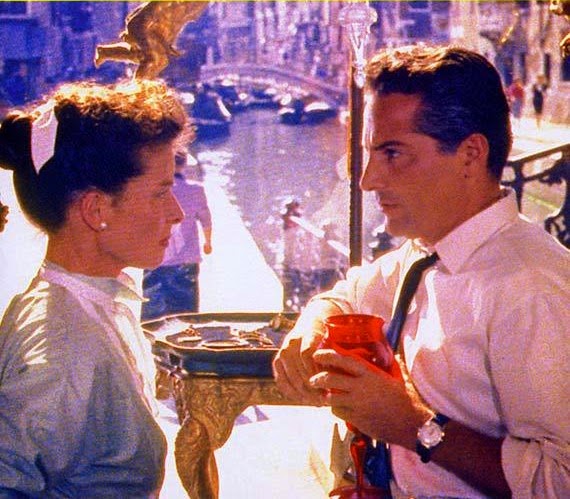 The best known scene in the film is when Hepburn falls into the canal. Her character is busy with her movie camera, filming Renato’s store, when she starts backing up to get a better shot and falls into the water. She’s horribly embarrassed when she comes out of the canal and calls for Mauro to return her to the Pensione. Mauro is a street urchin, whom Jane hired to guide her through the streets of Venice. 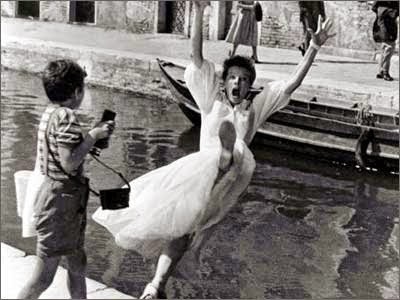 Of course, Renato hears of her ignominious fall and comes to see her at the Pensione. Jane’s not used to being on the receiving end of male attention, therefore, she’s nonplussed by Renato’s visit.

Renato: I thought everything happened so fast in America.
Jane: Not this sort of thing, not to me. 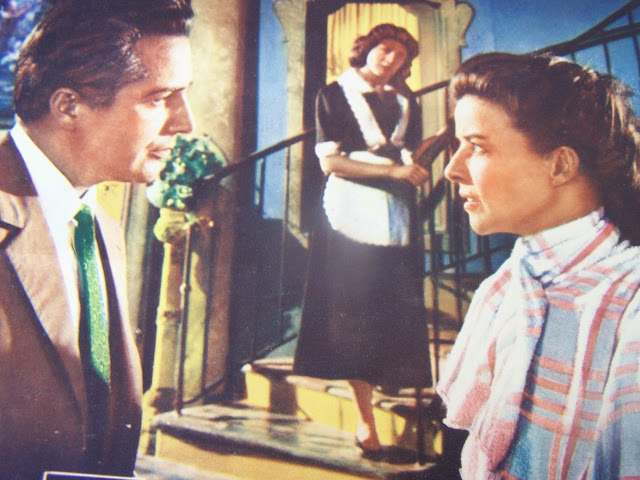 They meet the next day and he buys her a gardenia, a flower that’s been haunting Jane’s romantic dreams since her college days. It represents the past, present and future. It foreshadows the movie’s ending as the gardenia reappears later in the film and is as elusive to Jane then as the one that gets away now, floating down the canal, out of reach of her’s and Renato’s grasping hands.

Then comes heartbreak for Jane before their affair even begins, when she finds out that Renato’s married with four children.

Renato: You are like a hungry child who’s been given ravioli to eat. ‘No,’ you say, ‘I want beefsteak.’ My dear girl, you are hungry. Eat the ravioli.
Jane: I’m not that hungry.

Oh, but she is that hungry. He soothes her with a tale of separation and before long, she’s back in his arms, dancing. Eventually, they make their way to his apartment. The viewer is left with the image of this one red shoe on the balcony, which touchingly says what doesn’t need to be said. 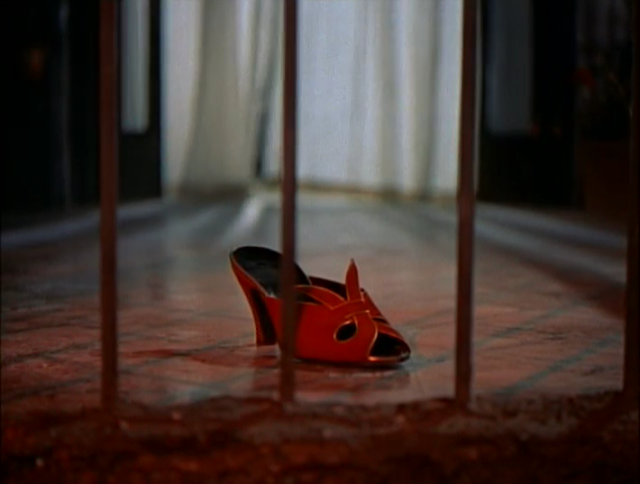 Jane only has one way out of this summer affair. Her moral code and semi-sheltered life she led at home won’t permit another choice. She tells Renato, It’s the happiest time in my whole life. She has one last glimpse of Renato as he rushes to see her off at the train station: in his hand, a white gardenia. 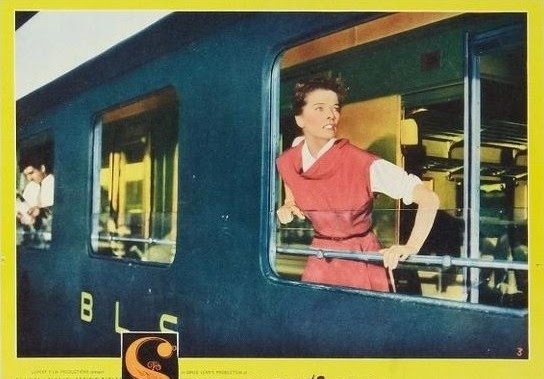 This is an amazing role for Katharine Hepburn. She plays Jane Hudson with a fine nuance, showing the character’s longing in simple glances and gestures. There are moments when no dialogue is needed, simply the expression on Jane’s face is enough to convey her thoughts. There is no confident character here, rather a false bravado front with vulnerability stirring close to the surface. In her autobiography, Kate wrote: It was a very emotional part and I tell you I had to be on my toes to give David enough of what he wanted practically on call.

Rossano Brazzi is brilliant as the Venetian shop owner emitting old world charm. He’s suave, masculine and knows what he wants. For him, there is no fear in pursuing a woman like Jane Hudson. Though Brazzi had been acting since 1938, appearing in over fifty movies, this part for him acted as a breakout role. He received international fame, along with several thousand female hearts. 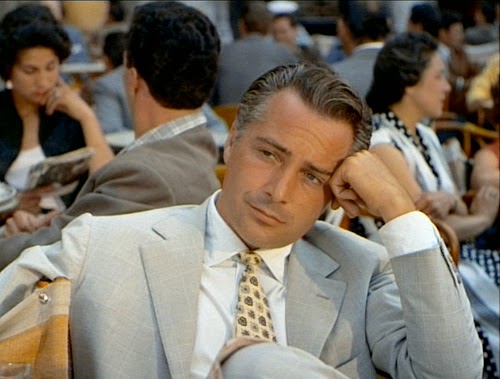 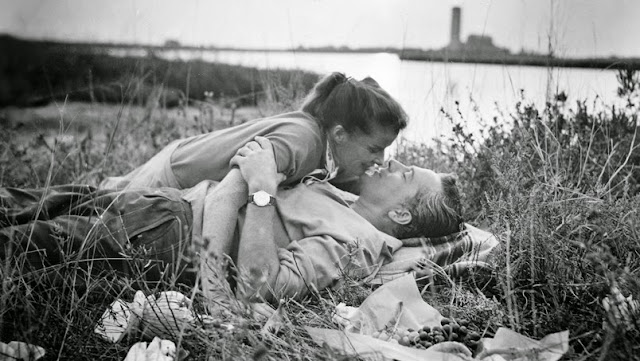 After watching the movie, Katharine Hepburn gave the characters an alternate ending and said: In real life, she gets off [the train] at Mestra, only 7 miles away and goes right back to him.

At the start of filming, Brazzi and Hepburn had what one newspaper called a royal tussle, which culminated with Hepburn walking off the set. Brazzi recalled, “No one ever thought I would finish my picture with Katharine. We are good friends now, but the first day she was telling me: ‘Look at me, Mr. Brazzi, when I speak.’ I say nothing to this, but I didn’t look at her. Then she said, ‘Mr. Brazzi, I don’t think there will ever be a picture released with Rossano Brazzi and Katharine Hepburn.’ Miss Hepburn, I say, that’s fine with me… Now we are the best of friends and I think she’s the greatest actress in the world.” 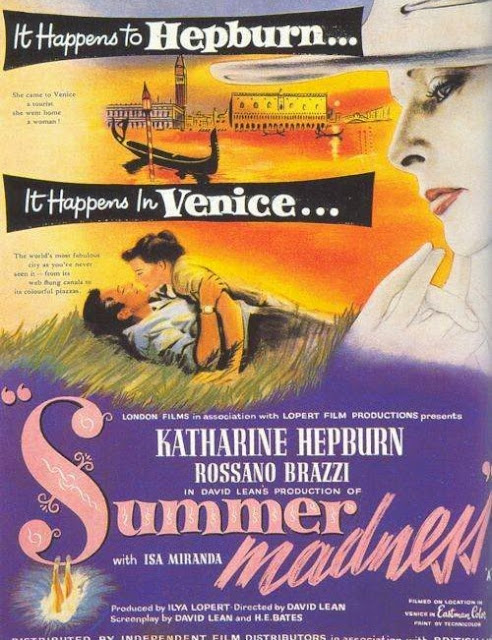 Five fun facts about Summertime:
1. Katharine Hepburn received an Oscar nomination for Best Actress.
2. David Lean received an Oscar nomination for Best Director.
3. Kate’s character’s name ‘Jane Hudson’ reappeared a few years later in the Bette Davis/Joan Crawford movie “Whatever Happened To Baby Jane?”
4. Katharine Hepburn did her own stunts, including the fall into the canal, which gave her a lifelong eye irritation.
5. Rossano Brazzi was nine years younger than Kate. He was born in 1916 and she was born in 1907.

Thanks for joining me in this celebration of Katharine Hepburn! 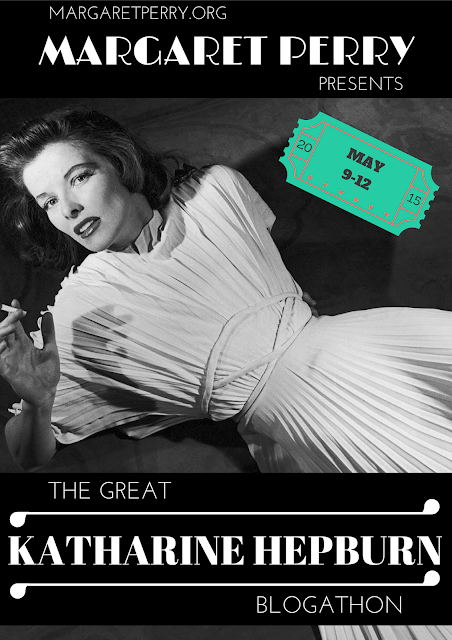