To celebrate Vivien Leigh’s birthday today, I’ve put together this fun list of seven cool things in regard to Vivien and her work. Vivien Leigh led an incredible life, so obviously, there are far more than just seven fun things to know. However, what I tried to do here, was list a few things not widely known. Hope you enjoy!

1. When it came to the lead female role in Dark Journey, Vivien Leigh wasn’t the first choice to play Madeleine. Miriam Hopkins was originally scheduled to play the French spy opposite the sly role of Conrad Veidt. She dropped out due to differences with the film’s director, Victor Saville. Instead, Miriam starred in, Men Are Not Gods, which Vivien was rumoured to have been the lead actress.

2. Vivien Leigh and Ivor Novello treaded the boards together, for the first time, in The Happy Hypocrite, in 1936. But they also appeared onstage together, for a second time, for a one week performance during the Annual Garden Theater Party.

3. Vivien Leigh hated tea! Even though she was British and born in the tea capital of the world, Darjeeling, Vivien didn’t enjoy the drink. She even remarked once that she thought the tea-time ritual was a waste of time!

4. In Sidewalks of London, Vivien’s character, Libby, gets to wear some awesome jewelry. The bracelet, earrings and ring were on loan from Boucheron of Bond Street. The cast and crew (including Vivien) all thought these pieces were costume jewelry. They didn’t know they were the real thing until after the movie was finished. Producer Erich Pommer and Boucheron didn’t want the jewelry to disappear during filming. 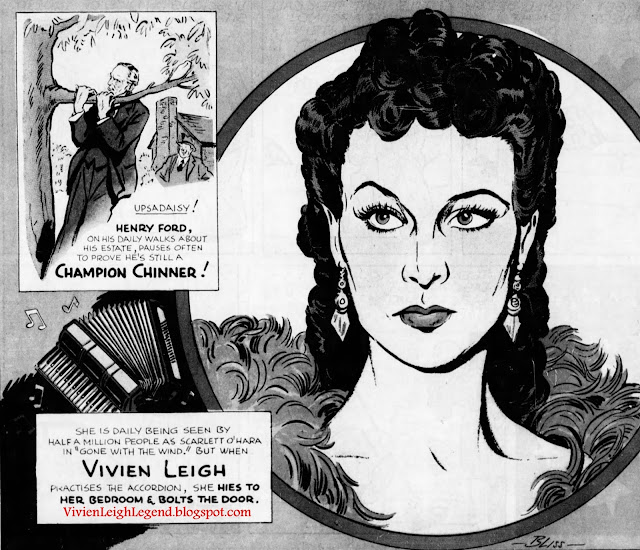 5. While Vivien was in Hollywood making Gone With the Wind, she learned how to play the accordion. According to Hugo Vickers’ biography, she became proficient enough to play Swanee River and Banjo On My Knee.

6. Most Vivien Leigh fans already know that That Hamilton Woman was one of Winston Churchill’s favorite movies. By the end of 1941, Churchill had purportedly watched it approximately half a dozen times. Coincidentally, it was also one of Joseph Stalin’s favorite movies.

7. While Vivien Leigh was in Hollywood, she developed a fondness for college football, American-style. Her favorite team was UCLA. When they didn’t make the Rose Bowl tournament that year, Vivien was very disappointed. One Hollywood magazine even called her a demon fan when it came to football!

Thanks for joining me today in celebration of Vivien’s 103rd Birthday!

Fashion Friday #13: The Lady of the Camellias

21 Cool Things About "That Hamilton Woman!"