The 1940 summer edition of Screen Album promised to have 100 new pictures and 1,000 new facts, inside its covers, of the day’s leading actors and actresses. Both Vivien Leigh and Laurence Olivier were featured. They each received one full page, which contained one photograph and a biographical article.

I’ve typed up both articles, which are definitely products of their time, so they should be read with a big grain of salt. Enjoy!

Vivien Leigh was the 29th, and last contestant, in Selznick’s two year search for Scarlett. Two weeks before, she’d arrived in Hollywood, a modern version of the scarlett woman opposite Laurence Olivier… The story starts on Guy Fawkes Day in Darjeeling, India, with the birth of Vivian Mary Hartley, November 5, 1913. Mother Hartley was on vacation from Calcutta’s heat. Her stockbroker husband stayed behind to watch the market.  At six, Vivien was transported to a convent near London. The Indian climate’s no recipe for an English complexion. After eight years of British fog, she crossed the channel to a French convent. At sixteen, she was graduated, stage struck, from Mlle Manileve’s School for Young Ladies in Paris. She underwent at eighteen months of finishing at Baroness von Roeder’s Bavarian seminary before entering the Academy of Dramatic Arts in London.

A lighter moment at a hunt ball produced Barrister Herbert Leigh Holman. In three weeks, Miss Hartley was Mrs. Holman. Three more weeks and she was back at the Academy to finish her course. A year later, daughter Suzanne was born. Herbert made a good living, augmented  by a private income. Herbert’s wife could afford to harass the agents til she got the right roles. So, as Vivien with an E and, because she loved her husband, surnamed Leigh, she visited agents. Two small film roles got her a part in a play, which led to discovery in the mask of virtue. 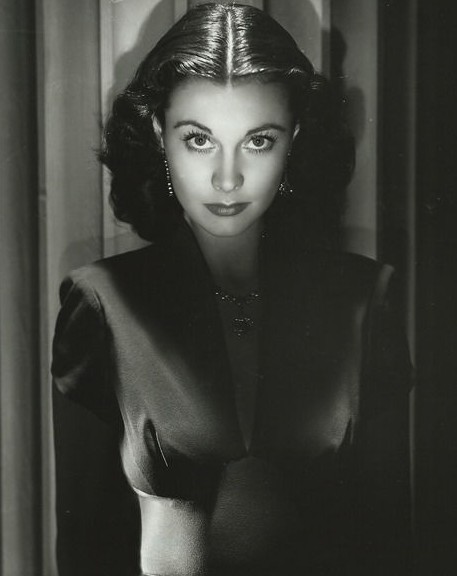 She was Vivien now, with the ‘e’ for glamour and the Leigh for the love of her husband. Hollywood shoved contracts at the most talked about actress since Bankhead. Vivien politely declined in favor of two films per year with Korda. The Holmans, meanwhile, were as happily married as an English lawyer and London celebrity could be. Then came Korda’s Fire Over England and– Laurence Olivier. They’d met a year before in mediocre film. Nothing happened. Now Leigh forgot home and husband to be Shakespeare’s mad heroine to Olivier’s melancholy Dane. Under love’s stimulating influence, their careers went soaring swiftly skyward.

They kissed and parted when the Gold Coast lured Larry in the fall of ’38. Vivien languished– but not for long. December 1st saw them reunited in Hollywood. Sly Larry took her to dinner with agent Myron Selznick, brother of producer David. The brothers Selznick saw the spittin’ image of Scarlett O’Hara– 5’3″, 106 pounds, reddish-brown hair that photographs black and green eyes. The identity of Scarlett was revealed to the world. But were their faces scarlet when they discovered the scandal to be hidden from the newshawks! The lovers were warned never to be seen together. A watchman patrolled Leigh’s home. It was no use. Neither made any effort to keep their love affair secret. Inseparable, Larry coached his Vivien, taught her how to outwit Gable, the scene stealer.

Atlanta premiere time came and Leigh’s ultimatum that she wouldn’t join the fun unless Larry came, too. Larry went. Mysteriously absent from New York’s premiere, Leigh was with Olivier. News of her divorce broke soon after GWTW. Holman named Olivier co-respondent in an uncontested suit, January 5, 1940. He was awarded custody of Suzanne, now in a convent. On January 29th, Vivien Leigh was named as co-respondent in the Olivier case. Simon Olivier was given to his mother. And it’s off with the old, on with the new.

Like so many Britons of talent, Olivier is not really English. The first Olivier in England was French Huguenot. Since then the loyal Oliviers have married French and the name is pronounced O-leev-yay. To make your flesh creep, Olivier tells you his father was a priest, legitimizes himself then by adding “Episcopalian.” Priest Gerard Olivier had three children: Gerard, Jr., Larry and Sybille. When his childish treble still had a five year future, Larry was stuffed into an Eton collar and sent after Gerard to choir school. Here they studied catechism, singing and frivolously enough, acting.

At 10, Larry was Brutus to Gerard’s Caesar. Four years later, at Stratford-Upon-Avon, the school celebrated Shakespeare’s birthday with a presentation of The Taming of the Shrew. Then, at an exclusive public school, Larry had Heathcliff pummeled into his personality. The boys distrusted this choir school exotic who recited catechism and poetry with such fine feeling. Larry’s mother had just died and the sensitive kid needed sympathy. He got beatings. His father’s remarriage was another bitter blow. Larry went on the stage, resolved never to take another penny of his father’s money.

Like any self-made man, Larry speaks proudly of his first humble job. “We called ourselves the Lavatory Players,” he says. “We toured God’s country. Dressing rooms were scarce and lavatories gave you privacy.” Larry soon quit the lavatory squad, but there were those among his new associates who would gladly have kicked him back– and locked the door. This was Larry’s jinx phase. If he took a part, then the play folded, and vice versa. Ruefully, he recalls quitting Journey’s End to contest the Beau Brummel role with Maurice Evans. Laurence won and Evans stepped into Journey’s End. Brummel folded in a week and JE was a two season sensation.

His unholy talent expanded in America. He made a picture with Ann Harding. She folded. Same thing happened to Elissa Landi. Finally, they gave him Garbo in Queen Christina. Garbo sulked like a girl whose parents have picked her a distasteful bridegroom. Finally, she walked out on him altogether, saying, as she departed, “Life is a pain.” She wanted and got Gilbert as a leading man. But at the same time, she’d not only saved herself from the hellbent Landi-Harding path, but broken Olivier’s spell. 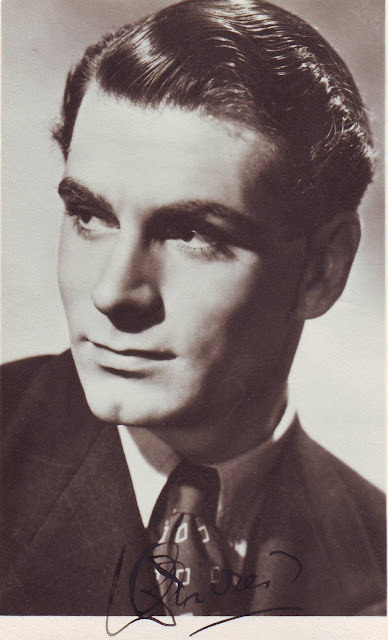 The last act in this jinx drama was Olivier’s expiation. He produced a show himself. Despite a Priestly script and stellar performances by Ralph Richardson and Greer Garson, it flopped– and the ghosts of plays and players were laid forever from Olivier’s conscience.

In ’36, he made Fire Over England with MRS. Vivien Leigh Holman. Together they journeyed to Denmark, he to be Hamlet and she to be Ophelia, at Elsinore, original site of the play. On broadway, he met another girl, Miss Jill Esmond. It was lightning love, hitting hard and burning out quickly. Wooed back to Hollywood for Wuthering Heights, his Juliet joined him to do Scarlett opposite Gable. They played Romeo and Juliet on Broadway– to a poor press and a packed house. With Vivien as Juliet, he really meant that balcony scene. Ordinarily though, this 33 year old professional goes about love scenes thoughtfully. “Kissing,” he says, “is a job.” By marrying Leigh he’ll achieve a very happy medium between business and pleasure.