Sunny Alexander knows Vivien Leigh better than Scarlett O’Hara knows herself. Vivien has been Scarlett so long and so intensely that she isn’t quite sure where she begins and the O’Hara girl leaves off.

However, Sunny unscrambles the two characters with little if any difficulty. She is a practical young woman who is not only Miss Leigh’s secretary but also her friend and confidante. She has been with her since her first day on “Gone With The Wind” and when Scarlett had to work all night, Sunny stayed right beside her. Having read at least a dozen interviews with Vivien Leigh, each one raving about her beauty, her charm, her red-gold hair, green eyes and will-o’-the-wisp figure I thought it might be fun to find out what she looks like when she gets up in the morning. That’s where Miss Alexander comes in, for she for months has seen her a few moments after she wakes up. She insists she is gay, fresh and full of spirits at some awful hour like 8 am and that she is prettier than ever with her curly tousled hair.

Sunny Alexander is a very attractive young girl herself, with a heart warming smile, a naturally pleasing manner, a low, well modulated voice.

We had luncheon in Vivien Leigh’s bungalow dressing room at the Selznick International studios and we took plenty of time over it. The surroundings were agreeable and it was enlightening to listen to details of a Scarlett O’Hara who had become a flesh and blood personality.

“Previous to coming to Miss Leigh, I never knew anyone could work so hard and so conscientiously as she did,” said Sunny. “Nothing was too difficult or tedious for her to do in order to make Scarlett O’Hara a living, breathing person. She was the character 24 hours out of the 24. I’m sure she dreamed of her the few hours she had a chance to sleep. She loved every minute of the strenuous day and read innumerable books about the South, as well as ‘Gone With The Wind’ two or three times and the script over and over. When she had to stay late at night while they got shots of her by lamplight and in the battle scenes, she never complained, never lost her temper, never forgot to be considerate of those about her. She is a real person, not just an actress.”

Praise from one’s coworkers is rare in Hollywood. The give and take of a professional life too often becomes just take where the actress is concerned. No one listening to Sunny Alexander could doubt her sincerity or her devotion to Vivien Leigh. 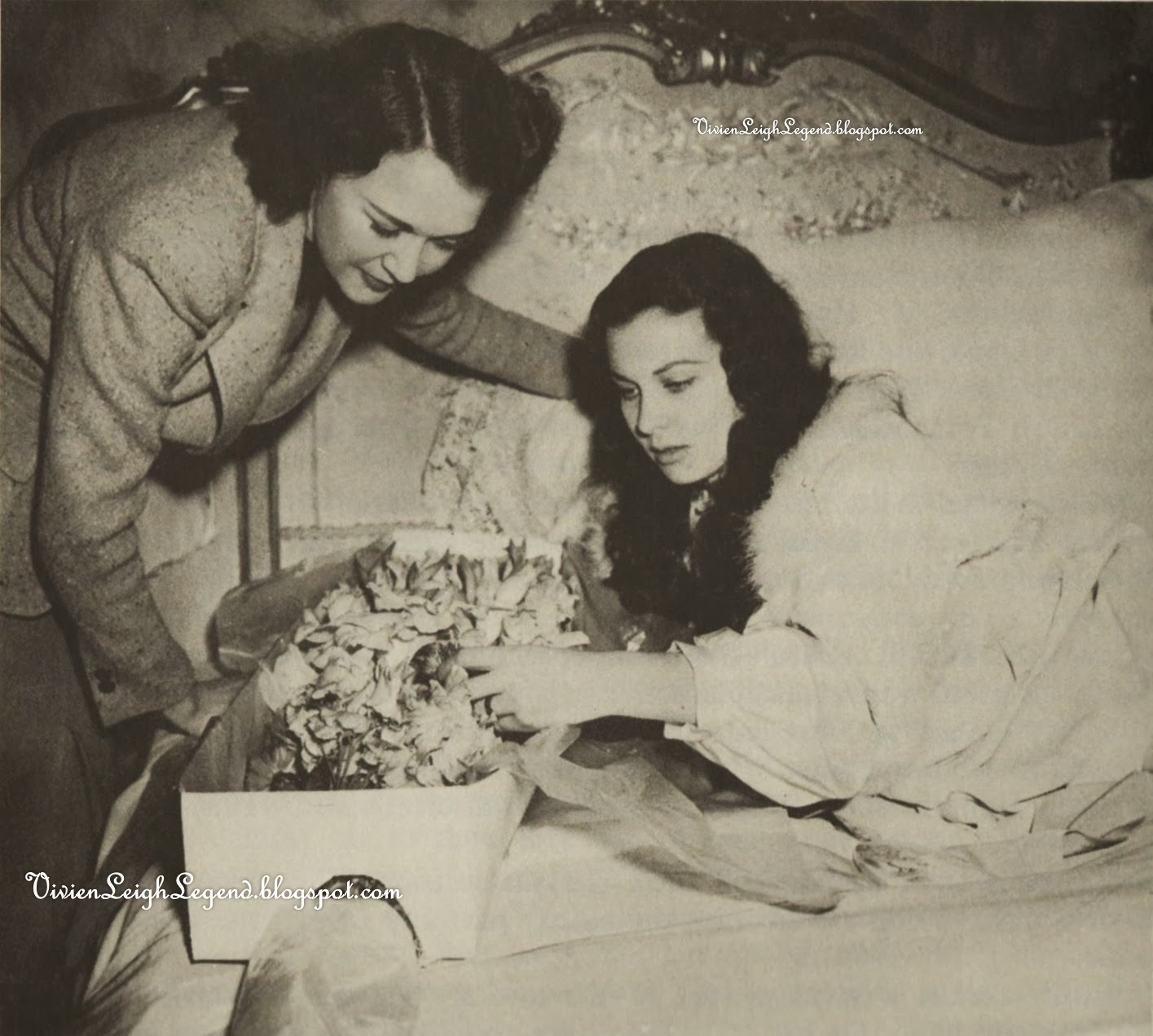 “While we were on the picture, I bought whatever Miss Leigh needed,” continued Miss Alexander. “At first I didn’t know her simple tastes and my purchases were all wrong. She never complained, just suggested we send them back and I try something else. Gradually, I got used to her likes and dislikes.

“Although she had many lovely dresses and suits when she came here, Miss Leigh seemed to like American styles. She enjoys wearing good tailored suits, wool jersey or creped dresses and very elegant dinner and evening gowns. She is so slight, with the traditional 16 inch waist of Scarlett, so colorful with her red-gold hair, green eyes and clear white skin, that she prefers clothes that do not make her too conspicuous in the daytime. Dark suits, furs and dresses become her more than pastel shades, although she is very partial to gray.”

Sunny Alexander becomes very vivacious and enthusiastic when describing some of Vivien Leigh’s characteristics. “She is one of the most loyal persons I have ever known,” she declares. “Also she is very considerate of other people’s feelings and tries never to hurt them. Her friends have been her friends for several years, most of them in the English colony here. She has decided viewpoints about things, makes a decision and sticks with it; she is kind to everyone, including her servants, who adore her. She sent for her cook and brought her from London.

“Unlike Scarlett, she is neither a spitfire nor a scold. Yet, she is not wishy-washy either. She has a level head and while she doesn’t pretend to be a businesswoman, she insists on getting her money’s worth for things.”

Sunny tells an interesting story about their visit to New York after their picture was finished. “Miss Leigh was so tired that all she wanted to do was to stay in the hotel and rest,” she explained. “She didn’t try to get up at all for the first few days, then she began taking an interest in plays, art exhibitions, etc. Nobody recognized her, of course, as the picture had not been released, so we ran around freely. She is terribly shy and afraid of crowds. I don’t know what she will do when she becomes known to the public, I’m sure it will be a terrific ordeal for her.

“One night we went to the theater to see Katharine Cornell. During intermission someone recognized Miss Leigh and instantly she was surrounded by crowds of people. She went numbly back to her seat, shaking and trembling like a leaf. When the curtain went down on the last act, she asked me what she should do. I suggested we wait a while, then go backstage and see the stars. Guthrie McClintic was with us and he took us back to Miss Cornell’s dressing room. We were going down to their place for supper and I shall never forget the horror of getting her into a car. We were mobbed. It took Miss Leigh the rest of the night to get over that experience.” 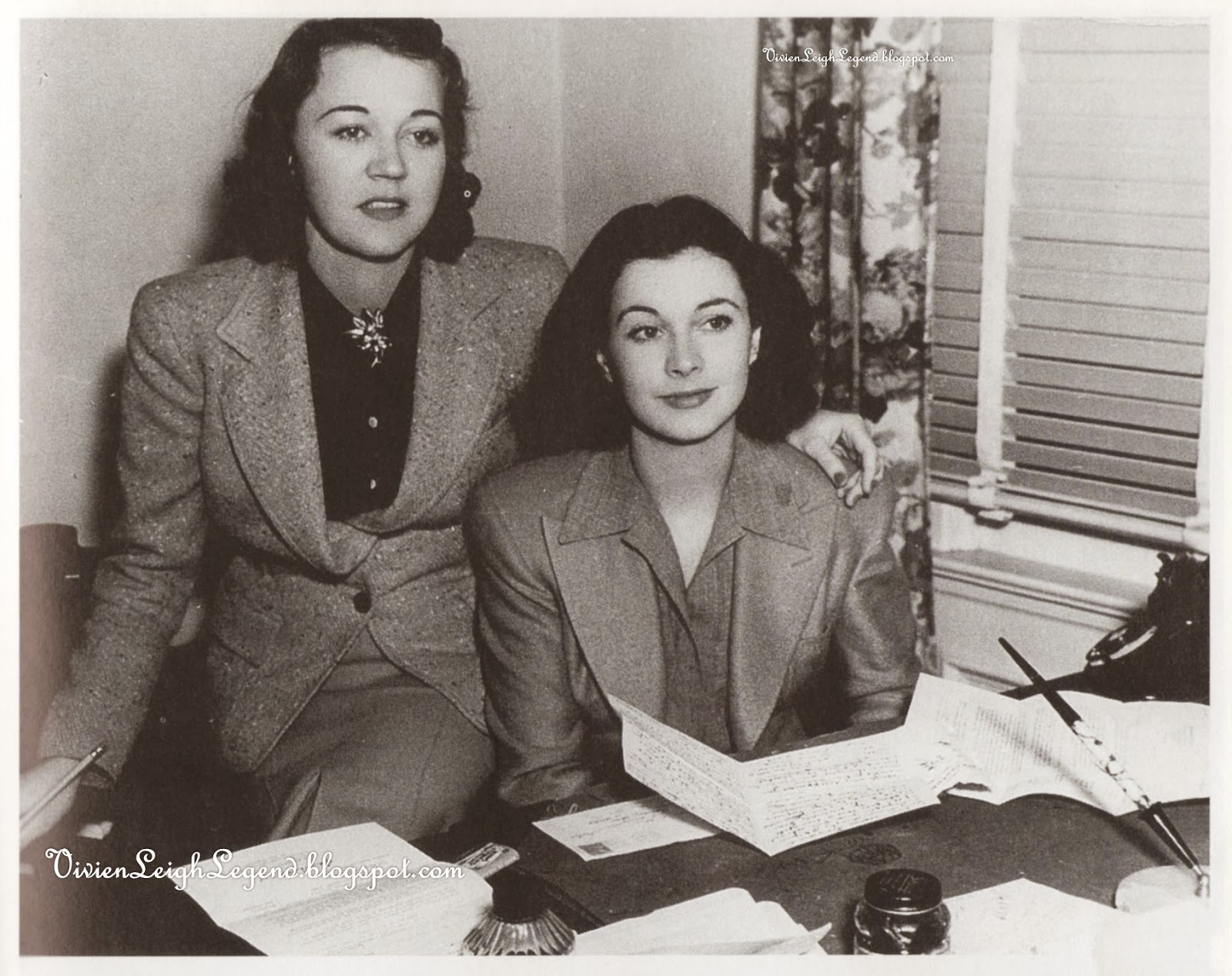 Sunny took charge of the household when Miss Leigh first moved into her new home. Besides her cook, there is John, the butler. an indispensable person of great cleverness; the parlor maid and the chauffer. “She does not believe in running too elaborate a place,: Sunny observed as we sipped our coffee. “She likes to entertain her friends and when she does, the flowers, the table, everything, must be nearly as perfect as possible. She is very artistic and everything she touches seems to glow with an added luster. When she arranges flowers, they look lovelier than when I do. She adores flowers, especially delphinium and tube roses.

“She prefers French food to any other kind of cooking and her cook follows French recipes almost exclusively.”

“If I have been too lavish in my praise of Vivien Leigh,” concluded Sunny Alexander, “It’s because she’s like that. I don’t see how anyone could know her at all well and not love her. Of course, her complete sincerity, simplicity and naturalness are her greatest charms. She has had a background of education and culture; she has a mind stored with all sorts of knowledge. If interesting thoughts make a person interesting, then Vivien Leigh is bound to be interesting, for I have been with her enough to know some of those thoughts. It has been a pleasure and a privilege.”

So, I leave you Vivien Leigh through the eyes of Sunny Alexander, her secretary, friend and confidante. Meanwhile, Vivien is planning a New York stage appearance next spring, according to a Broadway rumor. Her admirer and fellow Englishman, Laurence Olivier, is to be costarred with her. The two are planning to wed after obtaining their respective divorces. Olivier is married to Jill Esmond Moore; Miss Leigh’s husband, Herbert Leigh Holman, filed suit for divorce in London Jan. 5, naming Olivier as co-respondent.

Gone With The Wind Contract Signing