Vintage Article from April 1940﻿
(Author’s name not given)

During those long months when “Gone with the Wind” was in production, the film colony never got to know Vivien Leigh. She led the life of a recluse. Then she conquered the screen as Scarlett O’Hara; and became free to make a second conquest of Hollywood.

I watched Vivien enter the Trocadero with a dinner party this week- and heard the gasp go round the room. For her beauty is lit by a brilliant vitality that puts all your blonde beauties in the shade.

Vivien trailing her scarlet chiffons, with sprigs of white lilac tucked into that black upswept hair, and her slanting green eyes glittering against her magnolia-white skin puts a new emphasis upon glamour.

Today she radiates success- in her shining eyes and glowing smile. Small wonder that she bewitches the hardest people in the world. For she is the heroine of romance– romance in her film triumph: romance in her colorful private life.

Now that “Gone with the Wind” is released, the story of Vivien’s initial discouragement can be told. She created Scarlett O’Hara in an atmosphere of exacting work, work and then more work. Energetic and impatient, she was at the studio at 7 o’clock every day and drove herself home to her modest apartment every evening. Producer David O. Selznick and director Victor Fleming were marvellous to her, she says, but she was thoroughly homesick.

The demands of her work may have a good deal to do with this- she had no chance to visit old friends or make new ones: no chance to enjoy the many pastimes to be found in or near the film town.

Occasionally she dined with Ronald Colman and his wife (Benita Hume). Her sole recreation was swimming at the George Cukor home on Sunday afternoons; she was most upset when Cukor, who had directed the opening scenes of “Gone with the Wind,” was replaced by Fleming. She takes every opportunity of stressing the debt that Scarlett owes to Mr. Cukor. 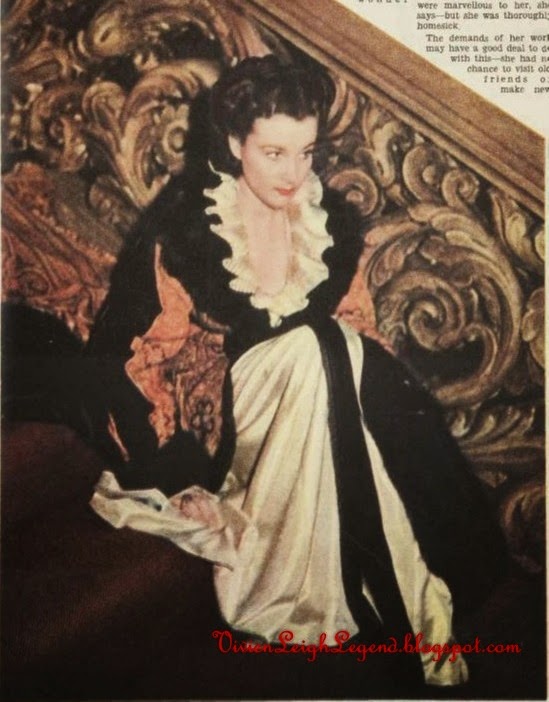 On the set she lunched in her dressing-room – rarely having a guest. And constantly there was the pressure of outside opinion- the doubts and criticisms of the people who had waited three years already to see “Gone with the Wind”-and who wondered if she could make it.

It was a tremendous responsibility- carrying- largely on her shoulders the burden of success- or failure. Money problems are not supposed to worry stars. But Vivien, shrewd, intelligent, knew that a fortune- a fortune of a million pounds sterling- was sunk into the picture.

Her private life was complicated by her love for Laurence Olivier -the English star whom she had followed to Hollywood to see. If Vivien had never made that romantic visit- she would not have become Scarlett O’Hara. But she left her home, and her small daughter, Suzanne, in London. Vivien’s husband, Leigh Holman from whom she was separated, was still her husband. Olivier’s wife, Jill Esmond, was in London too.

Then both tremendous problems were resolved. “Gone with the Wind,” as I have already told you, is the biggest success in screen history. And two divorce suits begun in London have left the way open for marriage between Vivien and Laurence Olivier.

Now Vivien is embarked upon her MGM drama, “Waterloo Bridge.” Laurence is in the same studio, making “Pride and Prejudice” with Greer Garson.

Success as Scarlett; happiness as Vivien Leigh: the English star is now on top of the world.

Gone With The Wind, Indeed!