Made in Paris is a delightful romantic comedy set in Paris. It stars Ann-Margret, Chad Everett, Richard Crenna, Edie Adams, John McGiver and the incredible Louis Jourdan. The film was directed by Boris Sagal and written by Stanley Roberts. 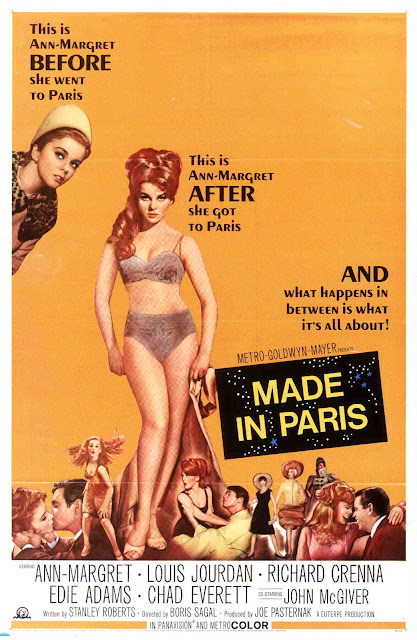 Ann-Margret plays the virginal Maggie Scott, a young lady employed in Barclay’s department store. The store is owned by Roger Barclay (John McGiver), who decides to send Maggie to Paris on a trial run as fashion buyer on the advice of Irene and his son Ted. Irene (Edie Adams), the fashion buyer for Barclay’s, is quitting to get married. Roger stresses to Maggie that she must make sure to get the Fontaine account as Barclay’s is currently the exclusive American retailer for this French line. 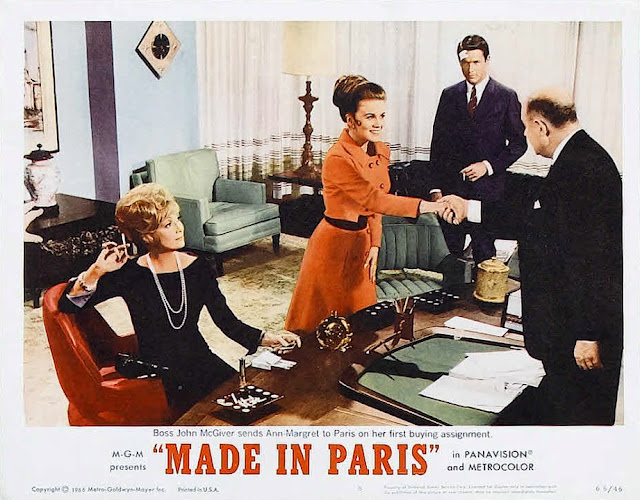 Irene, a “woman of the world” type, tries to let Maggie know how she keeps Fontaine’s account, but is constantly interrupted and isn’t able to give her the lowdown. Maggie and Ted (Chad Everett) have a few flirty moments before she leaves for Paris. 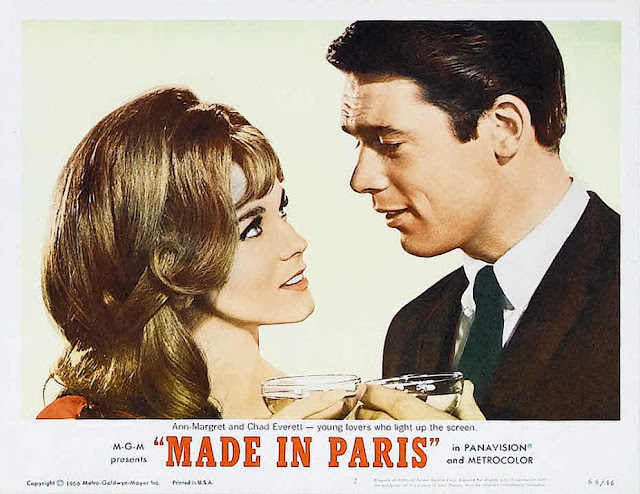 Ted calls his good friend Herb Stone (Richard Crenna), a reporter living in Paris, and asks him to look after Maggie during her stay. Maggie arrives in Paris and is met by Herb. He escorts her to Barclay’s company apartment. The apartment is beautifully decorated. Maggie, exhausted by her flight, decides to go straight to bed. 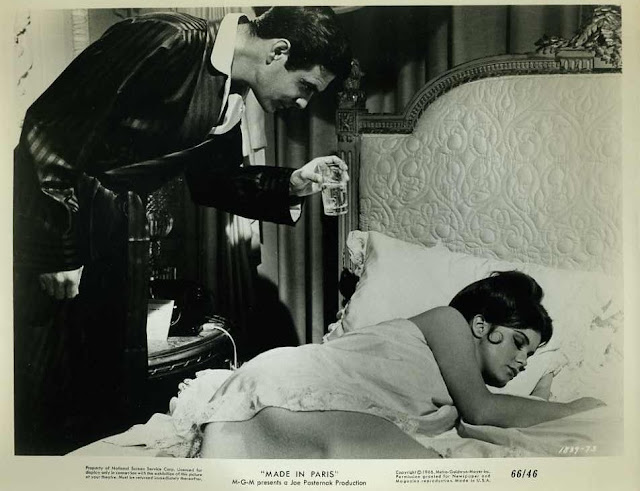 When he realizes his mistake, he tries to leave, but Maggie wakes up. After a few minutes of frustrating dialogue, Fontaine thinks Maggie is acting childish, so he tears up her invitation to his fashion show for the following day. 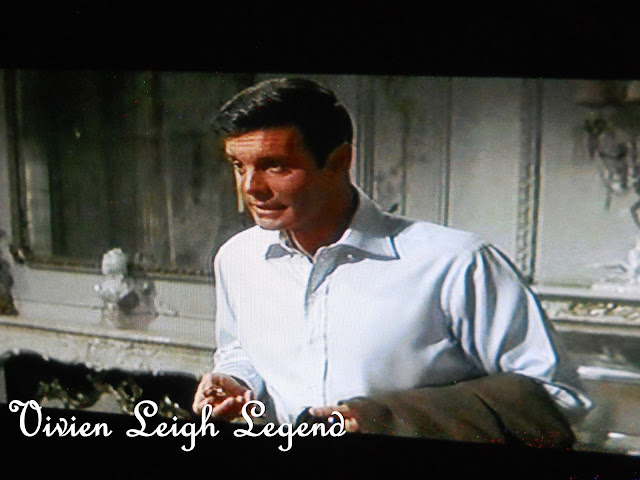 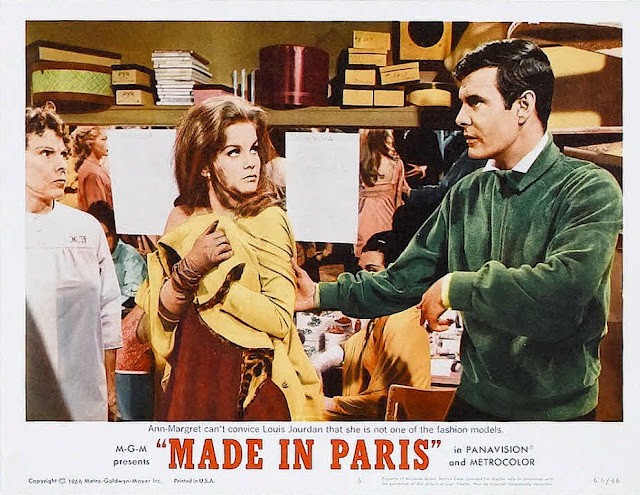 Fontaine takes pity on her and allows her to view the show from his office. He gives her tips on which of his designs will sell really well in the States and which clothes are just for the runway. 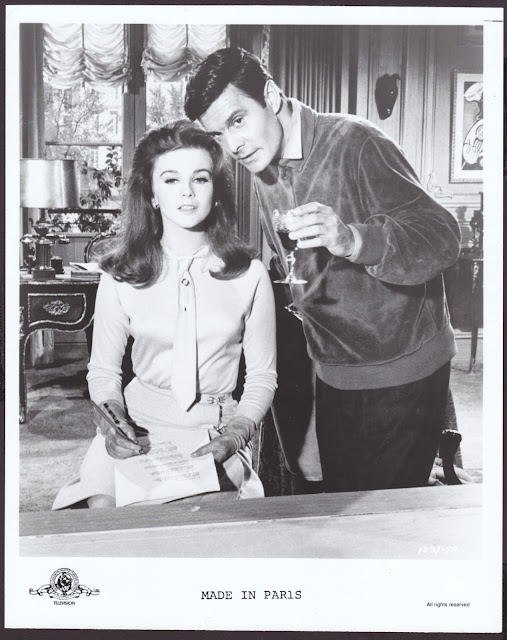 While in the office, Fontaine receives a phone call and makes plans for the evening. Maggie eavesdrops and concocts a plan for Fontaine to view her as a woman and not a child. I’d always heard Ann-Margret described as kittenish. Watching this movie, it’s easy to see how she achieved this modifier, especially in the film’s big musical number. Maggie hits the dance floor in an attempt to seduce Fontiane. Is she successful? You have to watch the movie to find out! 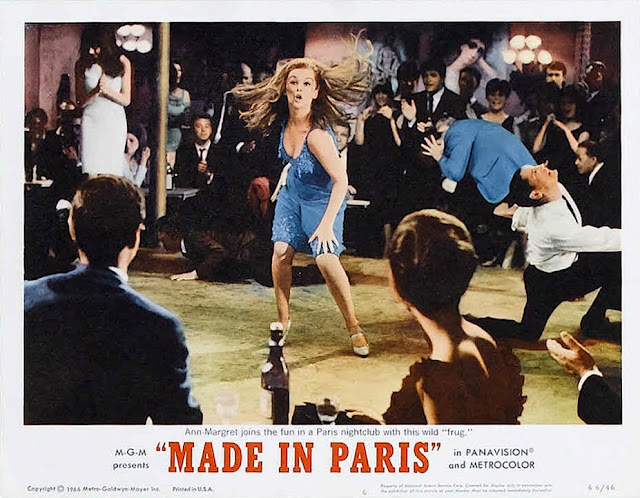 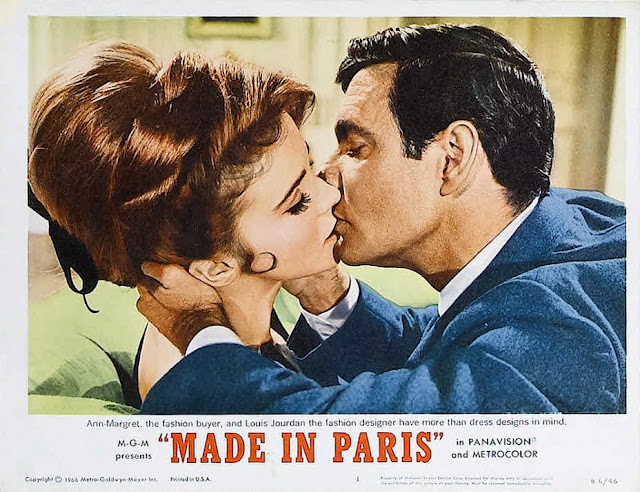 After Roger Barclay receives a telegram from Fontaine, Ted flies to Paris. Maggie informs him that the Fontaine account is fine and she doesn’t need his help. 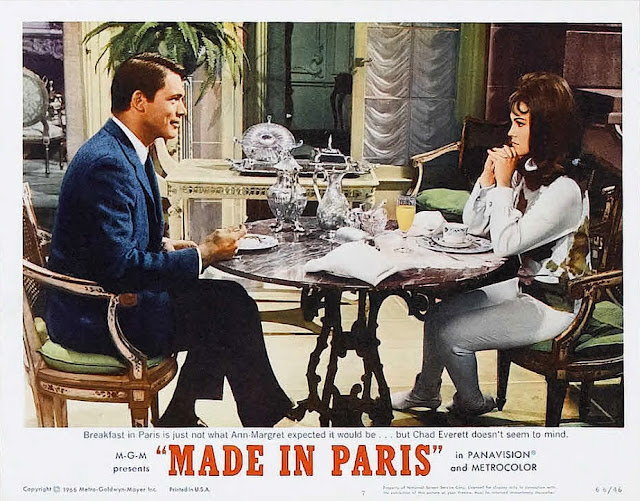 After Ted finds out that Maggie kissed Fontaine, he becomes angry. Ted and Fontaine brawl over Maggie, which, I’m not going to lie, is fun to watch. Maggie leaves the apartment without the guys knowing it. Barclay has also sent Irene to Paris. So Irene arrives at the apartment, but Maggie isn’t there. She’s out on the town with Herb Stone. 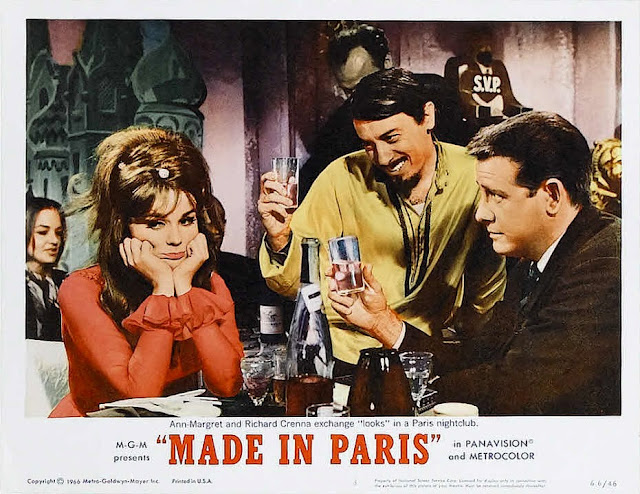 The next morning, after her wild night out with Stone, Maggie makes her decision over which man she’ll choose. Whom will it be? 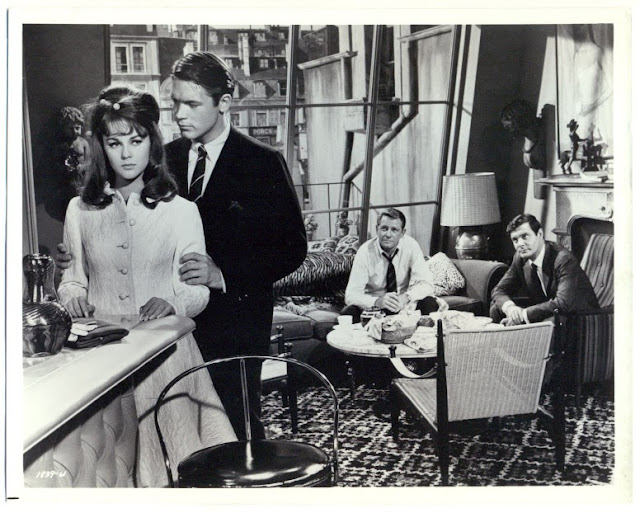 This romantic comedy is as lovely as Ann-Margret. Everyone does a great acting job. The script suffers somewhat and could’ve been slightly crisper. The amazing costumes are by Helen Rose.  Also, great set decoration by Keogh Gleason and Henry Grace. Standouts of the film are: the big, musical number; the clothing; set decor; and Ann-Margret’s hair. I’d rate this film 3 out of 5 stars.
Previous