Today marks the anniversary of the death of Vivien Leigh, who passed away at the young age of 53, from tuberculosis. She worked hard her entire life to be successful at her craft. For myself, and many others, she is the world’s greatest stage and screen actress. 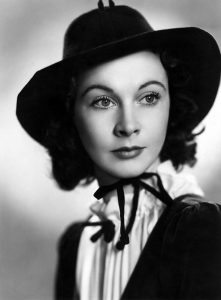 From the child who announced she would not sing, but recite; to the starlet who captured the world’s imagination as Scarlett; to the award-winning actress who gave herself completely to each of her roles; today, we mourn the world’s loss and celebrate the life Vivien lived.

Vivien was born in India, in November 1913, to British parents. At the age of 6, she was sent to a convent school in England and only saw her parents sporadically over the next few years. It was here that Vivien made the decision to one day become a great actress.

In 1932, Vivien married Leigh Holman, a barrister, at the age of 19. The following year, she gave birth to her only child, a daughter she named Suzanne. Shortly after her daughter’s birth, Vivien returned to the acting world. Her breakout role came from the play, The Mask of Virtue, as the courtesan Henriette, in 1935. Her uncommon beauty combined with her mesmerizing performance turned the critics on their ears and they dubbed her the Fame In A Night girl. Film companies took note and the offers poured in for her choosing. Vivien accepted an offer from Alexander Korda’s company, London Film Productions, for 50,000 GBP for five years.

Shortly after this, she began a torrid affair with a married actor named Laurence Olivier. This affair culminated with the two of them leaving their respective spouses in 1937, so they could move in together and live as a couple. In August 1940, after obtaining divorces, and after they each had made cinematic history (Larry as Heathcliff and Vivien as Scarlett), the two married quietly in California.

World War II broke out and the Oliviers, being very patriotic, returned home to England. Vivien said, I know London is not the safest place in the world right now, but it is still my home and that’s where I want to be.

Part of Vivien’s war service included going on a tour with ENSA, which is the British version of the USO. In 1943, Vivien, along with several other performers, went to North Africa to visit the troops. They toured several locations and even performed for the King of England. Among her performances, she did a special recitation about her character, Scarlett O’Hara, called The Terror of Tara.

In addition to her film roles, Vivien often portrayed characters on the stage, tackling numerous plays, including a few by Shaw and Shakespeare. She said she preferred being on the stage to making movies, a sentiment shared by Olivier. When she and Olivier were asked if they had ever thought of quitting the stage, the couple replied, Often, but it’s an idle dream.

Larry and Vivien remained married until 1960. After her divorce, Vivien continued to act and made her final two movies, The Roman Spring of Mrs. Stone and Ship of Fools. She also went on a world tour with her companion, Jack Merivale. Marriage rumours circulated around the two, but those rumours were in vain.

Late Friday night, on July 7, 1967, Vivien was found in her bedroom by her partner, Jack Merivale. He recalled, And I… looked in the bedroom and there she was, asleep, with Poo Jones curled up beside her. And I went into the kitchen to make myself some soup out of a tin. I had that and I went back into the bedroom, and she was lying on the floor. So I tried to wake her, with no result, and then she wasn’t breathing so I tried mouth to mouth resuscitation, what I knew of it, and no result whatsoever. Then I was pretty sure she was dead.” (from Hugo Vickers’ biography, Vivien Leigh). Vivien had passed away, leaving this world far too soon, at the age of 53.

At her memorial service, her good friend Emlyn Williams read the following lines from John Donne:

She, to whom all this world was but a stage.
Where all sat hark’ning how her youthful age
Should be employ’d, because in all she did
Some Figure of the Golden times was hid.
Who could not lack, whate’er this world could give,
Because she was the form, that made it live.

30 Things You May Not Know About Gone With The Wind