In the tradition of screwball comedies, comes this farce, titled, I Married A Witch. The movie is based on the book, The Passionate Witch, by Thorne Smith. 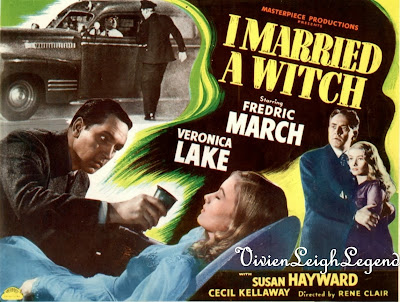 Released in October 1942, directed by Rene Clair and produced by Preston Sturges, I Married A Witch is a romantic albeit fanciful comedy. Jennifer (Veronica Lake) and her wiley father Daniel (Cecil Kellaway) are burned at the stake in the late 1600s by Jonathan Wooley (Fredric March), for witchcraft. Before being burned alive, Jennifer curses Wooley and all his male descendants to be unhappy in love and that the marriages they make will be disastrous for his denouncing her as a witch. An oak tree is planted over Jennifer and Daniel’s ashes to keep their souls from ever doing harm again. Wooley’s male descendants are then shown through time, all with their shrewish wives doling out tonguelashings.

In the 20th century, 270 years after their burning, a lightning bolt strikes the oak tree, releasing Jennifer and Daniel’s spirits from the old tree’s roots. Nearby, at a private party, they find Wallace Wooley, a candidate for governor and engaged to Estelle (Susan Hayward), a humourless socialite. After observing them, Jennifer tells her father that her curse is working on the Wooley men. Daniel says that’s no curse at all. Jennifer then gets the mad idea that if Wooley were to fall in love with her and she spurned him, then it would be a worse fate than marrying the wrong woman.

First, she needs to be human again as father and daughter are two spirals of smoke. He sets the Pilgrim Hotel on fire. Wooley, Estelle and his friend Dudley (Robert Benchley) are passing by on their way home from the party. They stop for the fire. Wooley then hears someone calling to him from inside the hotel. He enters, finds Jennifer and rescues her from the fire.

Screwball antics then ensue for the remainder of the film. Veronica Lake’s carefree character, Jennifer, is excellently executed against the stodginess of Fredric March’s Wallace Wooley. 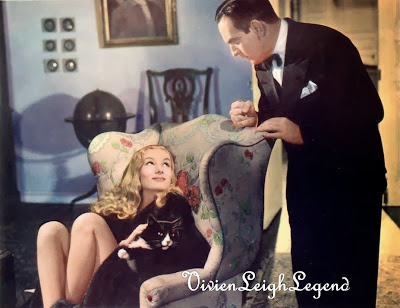 Jennifer shows up in Wooley’s house uninvited in hopes of making him fall in love with her. No matter how coyly she smiles at him, he won’t budge from his fiancee, Estelle. 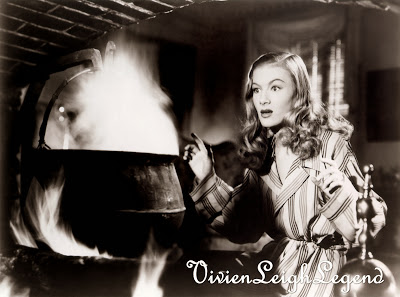 Whipping up a love potion that will soon wickedly backfire on her. 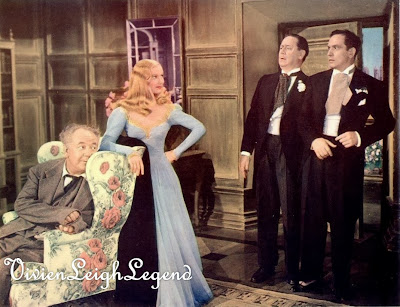 Wooley and Dudley meet Jennifer’s father, who is not at all pleased that his daughter is in love with a mortal. He, of course, has a plan to rid his daughter of her mortal love. 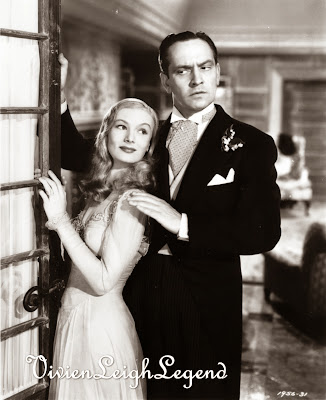 Lake is completely bewitching in this film. In the movie’s beginning, she practically purrs out her lines. Since Lake is only smoke, we have to base our first impression of her character on her voice. She and March, for all their reported off-screen dislike of one another, are the perfect match on film. Their great screen chemistry is one of the many pleasures found in this movie. 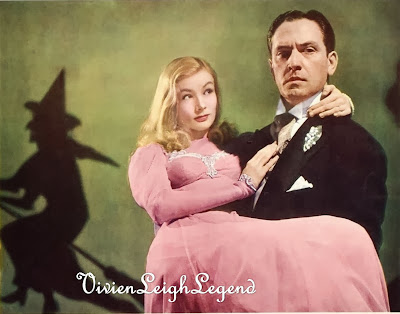 There’s a rumor that Veronica added a 40lb weight to her dress for the scenes in which March had to carry her. Lake was only 4’11” and very thin, so I don’t think an extra 40lbs made her that heavy, though March certainly may’ve had a different opinion on that. 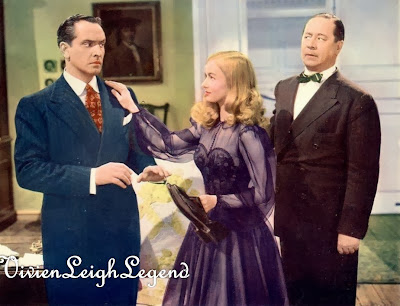 Edith Head designed the costumes for this film. This black chiffon gown is simply gorgeous with its bodice detail and see-through sleeves. 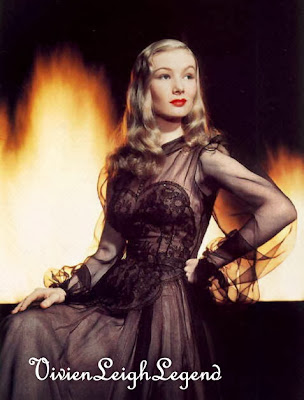 I Married A Witch is in black and white. I love the fact that the studios issued lobby cards in color. Except for this last photo, all the color pictures are from my lobby card collection.
Watch I Married A Witch online for free at youtube.
Previous