Gone With The Wind premiered seventy-five years ago, today, on December 15th, 1939, in Atlanta, Georgia. This premiere event was followed by two more: one in New York City and another one in Hollywood. 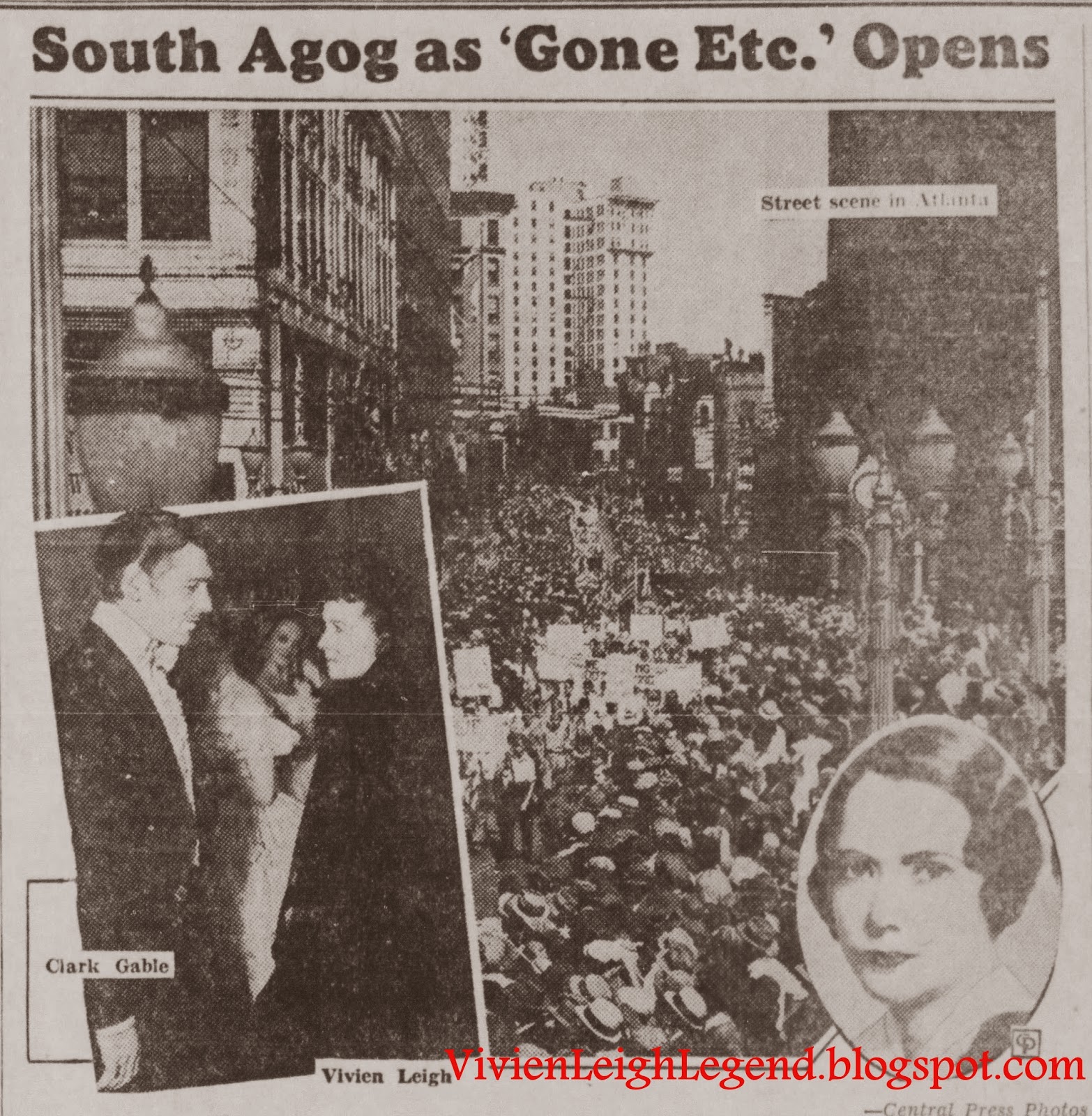 Ann Rutherford was the first star to arrive in Atlanta for the three day premiere. Ann played Carreen O’Hara, Scarlett’s youngest sister. Among the other arrivals were: Evelyn Keyes, who played Suellen; Alicia Rhett, whose character was India Wilkes; Laura Hope Crewes as Aunt Pittypat; and Ona Munson, who played Belle Watling.

Some of the activities scheduled for the stars to participate in were a parade, the Junior League ball, a press party at the Georgian Terrace Hotel and of course, the premiere. 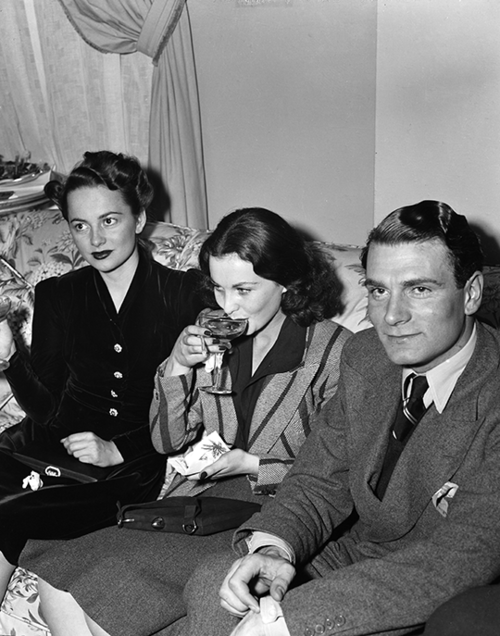 The press party was held at the Georgian Terrace Hotel in Atlanta. The hotel would also play host to the cast of Gone With The Wind, while they were in town, with the exception of Vivien Leigh and Laurence Olivier. Vivien and Olivier stayed at a private residence, since they were both still married to other people at this time. Selznick didn’t want the gossip mills to start grinding over the couple’s lifestyle and adversely affect Gone With The Wind’s potential ticket sales and earnings.
﻿ 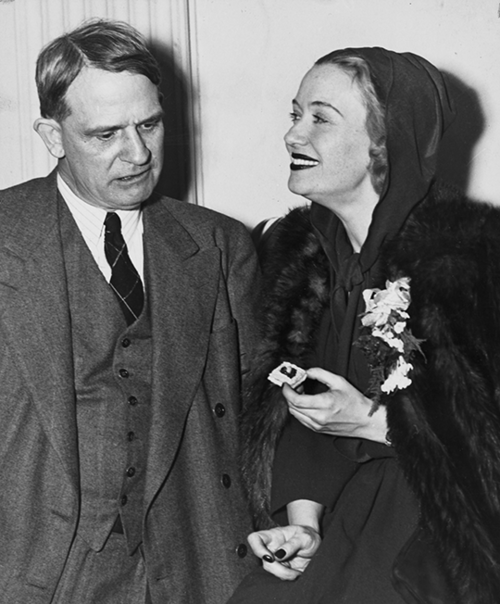 Ona Munson, the film’s Belle Watling, poses with Wilbur Kurtz, Sr. Kurtz was a historian and technical advisor hired to work on Gone With The Wind by Selznick. 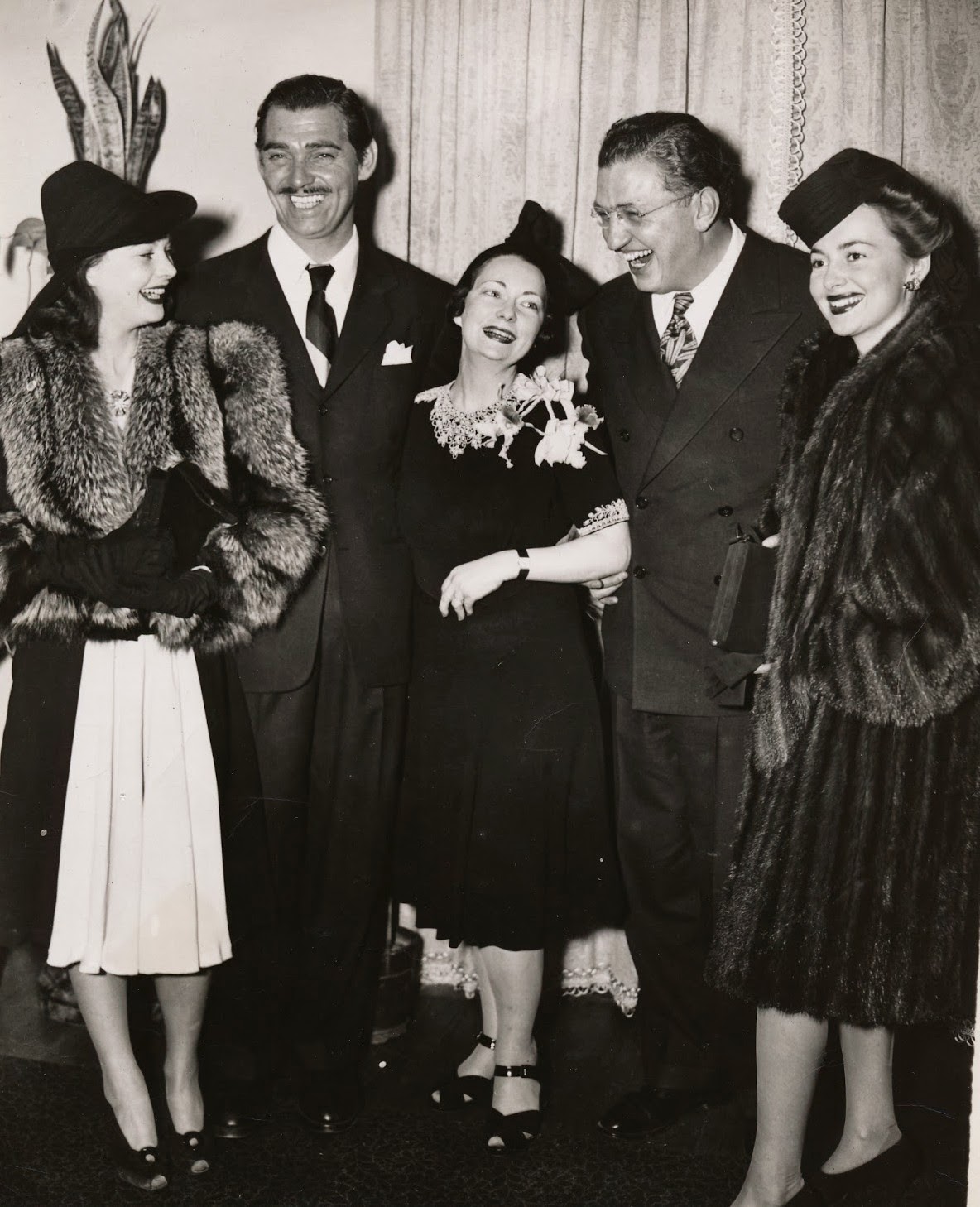 At a tea, held by the Atlanta Women’s Press Club, Vivien Leigh, Clark Gable, David O. Selznick and Olivia de Havilland pose with author, Margaret Mitchell (center), whom they were meeting for the first time in person. 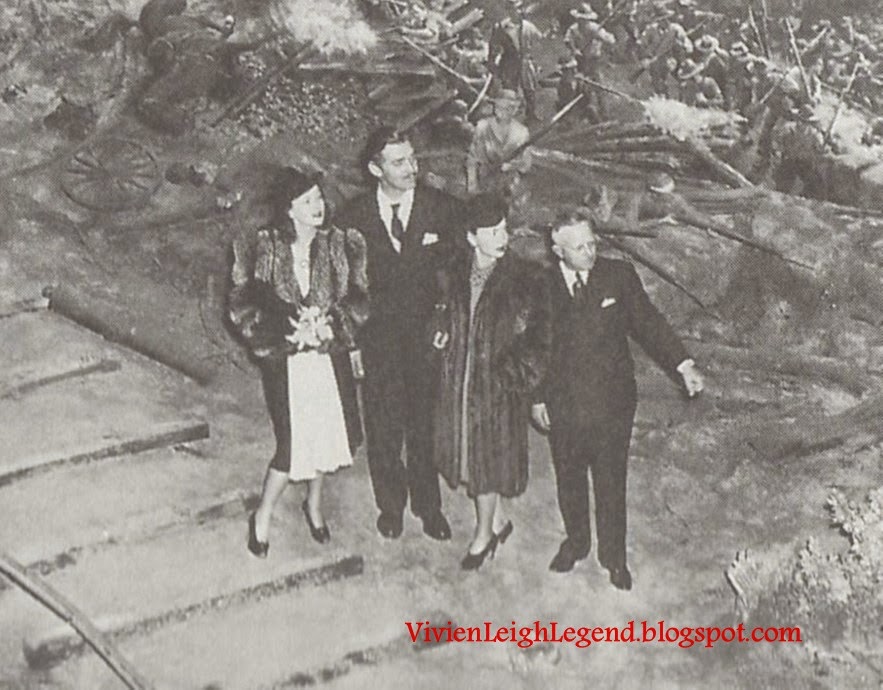 Vivien Leigh, Clark Gable and Olivia de Havilland are pictured with the city parks manager, George Simmons. George took them on a tour of the Cyclorama, which is a 400 ft long, 18,000 pound painting of the battle of Atlanta. 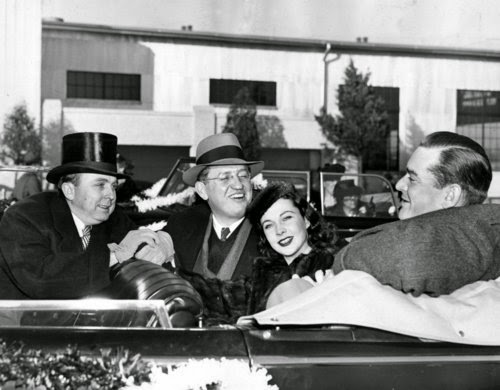 In the car, with Vivien Leigh, are Governor Ed Rivers of Georgia, David O. Selznick- the producer of GWTW, and Jock Whitney- financial backer of GWTW. 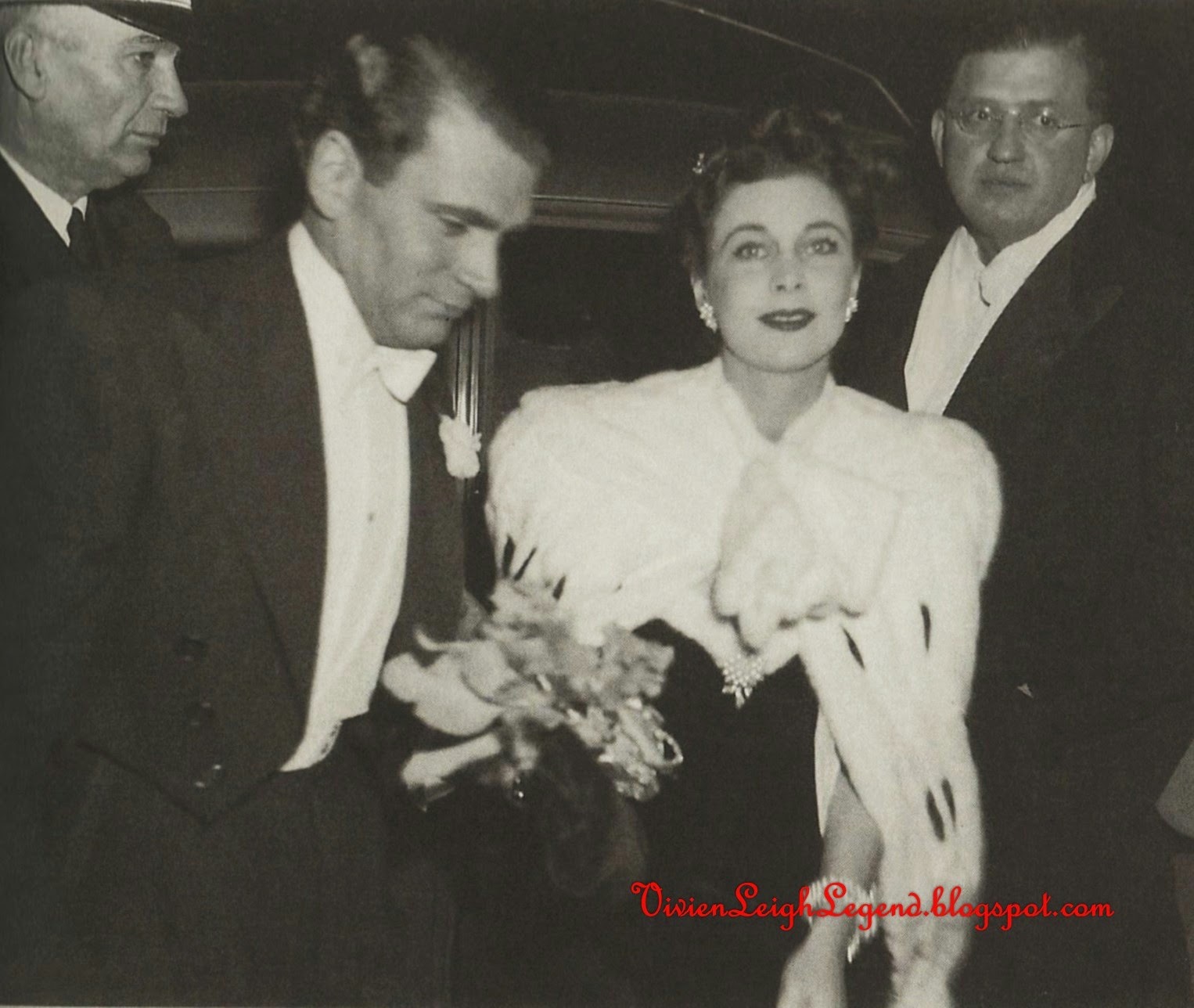 David Selznick stands behind Vivien, as Laurence Olivier helps her from the car, as they arrive for the Junior League Ball. Willard George designed Vivien’s fur cape, made from ermine and their black tails. 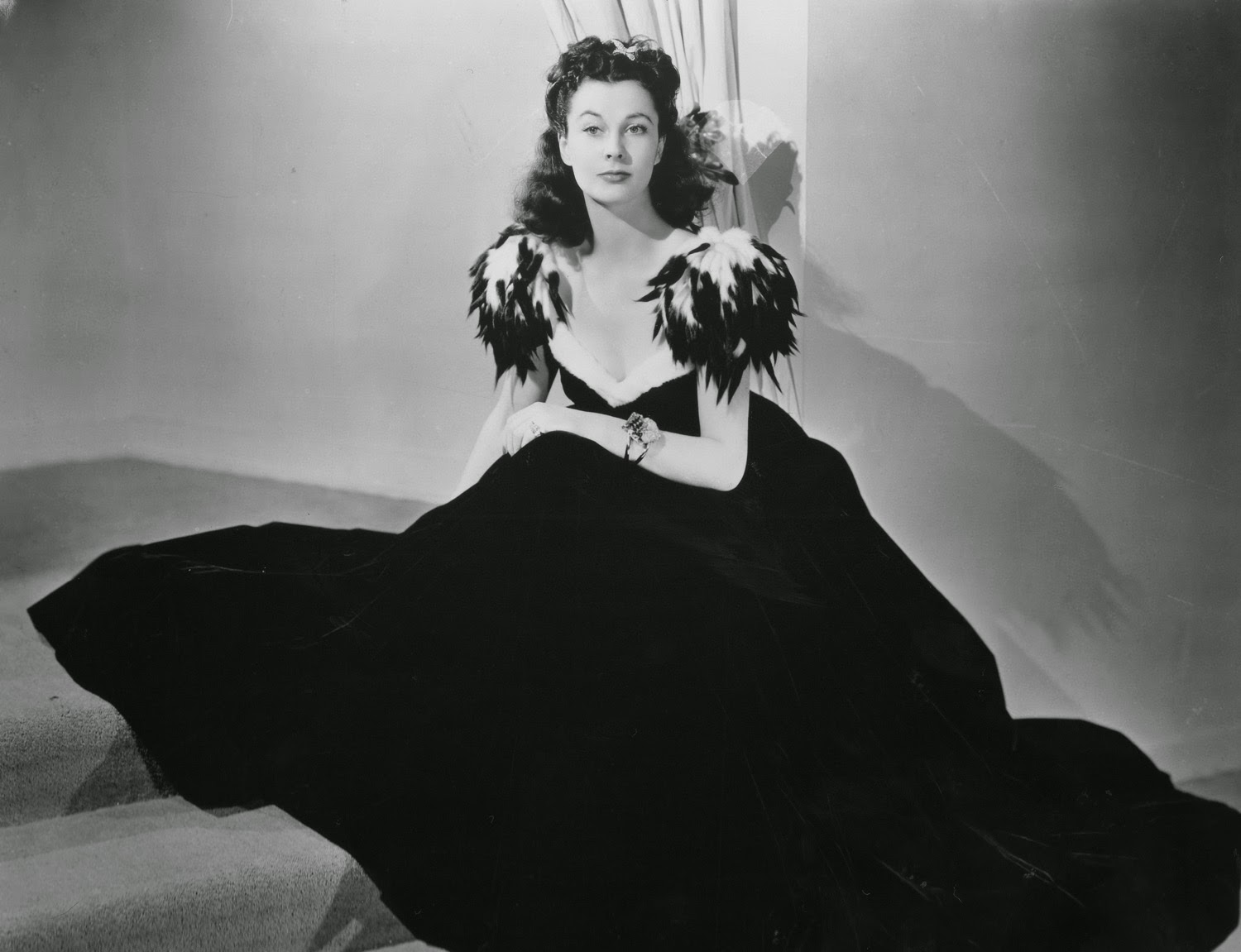 Vivien’s dress, for the Junior League Ball, was specifically designed by Walter Plunkett for this event. Her black evening gown was made from lyons velvet, a stiff and thick velvet fabric fashionable at the time of the premiere. The dress featured a fitted bodice, trimmed in white ermine, and sleeves capped off by ermine and ermine tails. From Vivien’s waist, the dress flared out into a wide, full skirt. Paul Flato designed Vivien’s jewelry for the evening, which featured a diamond butterfly clip for her hair, a diamond & ruby bracelet and a diamond bow ring. 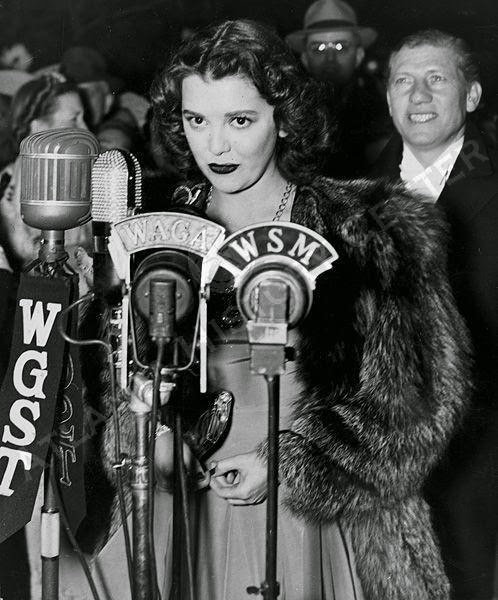 Ann Rutherford says a few words before the premiere. Before Gone With The Wind, Ann was best known as Polly, from the Andy Hardy movies.
﻿ 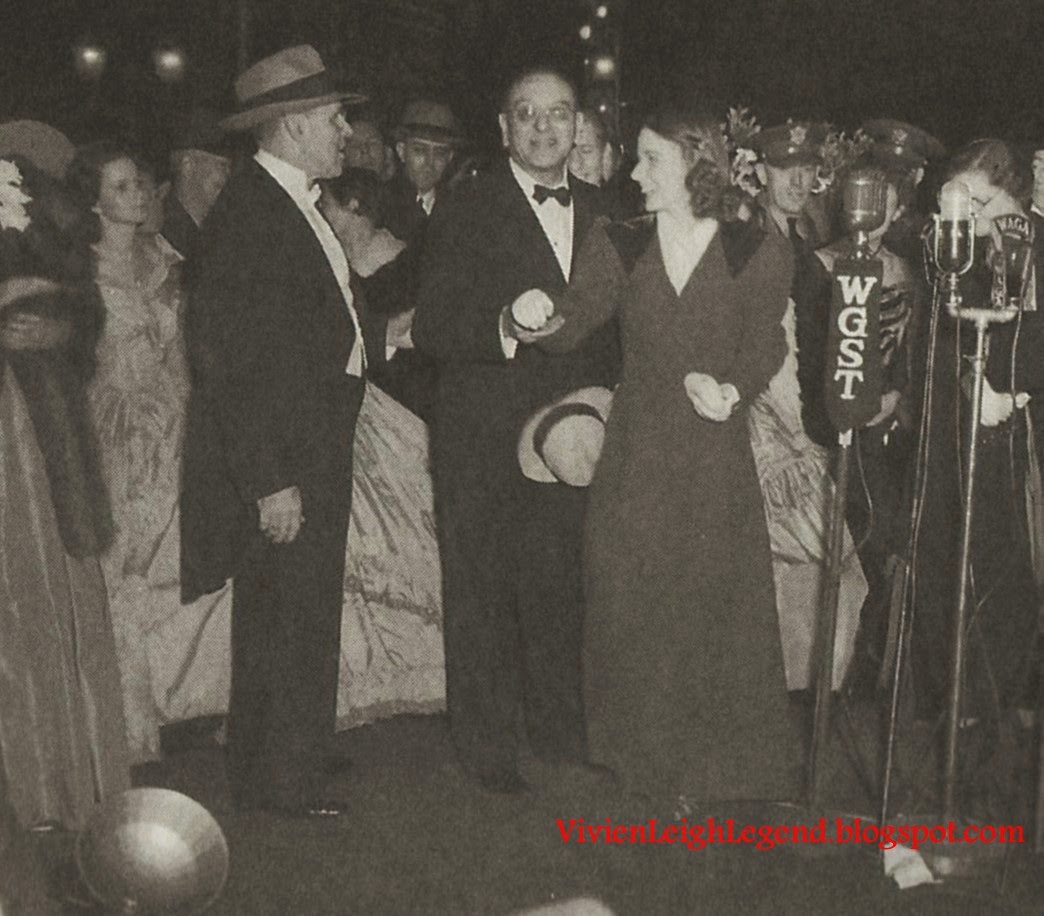 Alicia Rhett, who played India Wilkes in the film, attends the premiere. Alicia was discovered in Selznick’s famous Search for Scarlett.

Clark Gable and Carole Lombard attend the movie premiere of Gone With The Wind. Carole wore a medieval cape of blush satin with a train.

This is Margaret Mitchell’s night and Atlanta’s night, Clark said. I want to see the picture just as you see it. Please Atlanta, allow me to see “Gone With The Wind” tonight just as a spectator.

Vivien Leigh posed for these two publicity shots, showing off her movie premiere gown. Her gorgeous gown was designed by Walter Plunkett, the costume designer for the movie.

The gown is of gold lame, draped in Oriental fashion, with harem hem line and draped girdle accenting the small waist. Girdle and the short sleeves are quilted in rose pattern and studded with gold sequins. Worn with the gown is jewelry of topaz and diamonds set in gold. Necklace and bracelet are of acorn and leaf design. (from GWTW: The Three Day Premiere in Atlanta, by Herb Bridges) 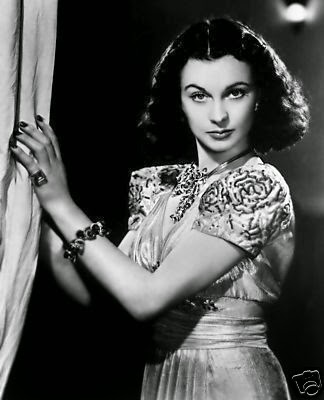 Needless to say, the premiere of Gone With The Wind was wildly successful. The biggest downside to the premiere was the fact that Hattie McDaniel, Butterfly Mcqueen, Oscar Polk and Everett Brown were not allowed to attend due to segregation laws in effect at that time. 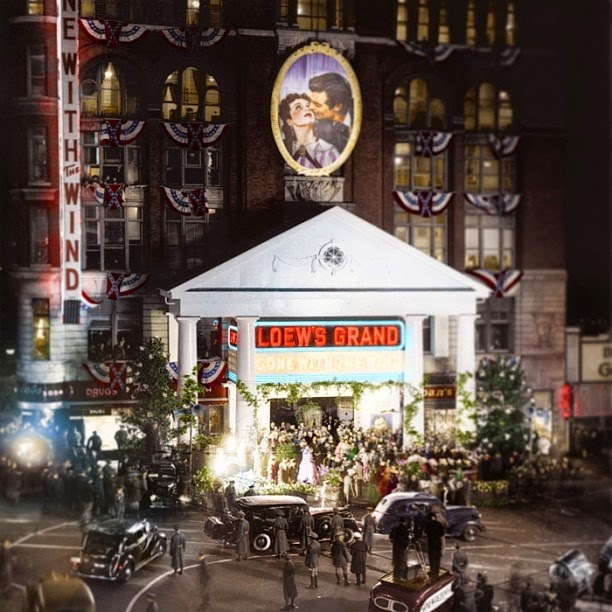 Gone With The Wind premiered at the Loew’s Grand theater in downtown Atlanta. The theater boasted a false front made to look like Tara, Scarlett’s antebellum home. Kleig lights and magnolia tress surrounded the columned front. Tickets to the premiere were $10 each with some ticket scalpers netting up to $200 for each ticket.

For, by any and all standards, Mr. Selznick’s film is a handsome, scrupulous and unstinting version of the 1,037-page novel, matching it almost scene for scene with a literalness that not even Shakespeare or Dickens were accorded in Hollywood, casting it so brilliantly one would have to know the history of the production not to suspect that Miss Mitchell had written her story just to provide a vehicle for the stars already assembled under Mr. Selznick’s hospitable roof. To have treated so long a book with such astonishing fidelity required courage—the courage of a producer’s convictions and of his pocketbook, and yet, so great a hold has Miss Mitchell on her public, it might have taken more courage still to have changed a line or scene of it. -NYT

The Search for Scarlett O'Hara

15 Things About "Gone With the Wind" and the Oscars