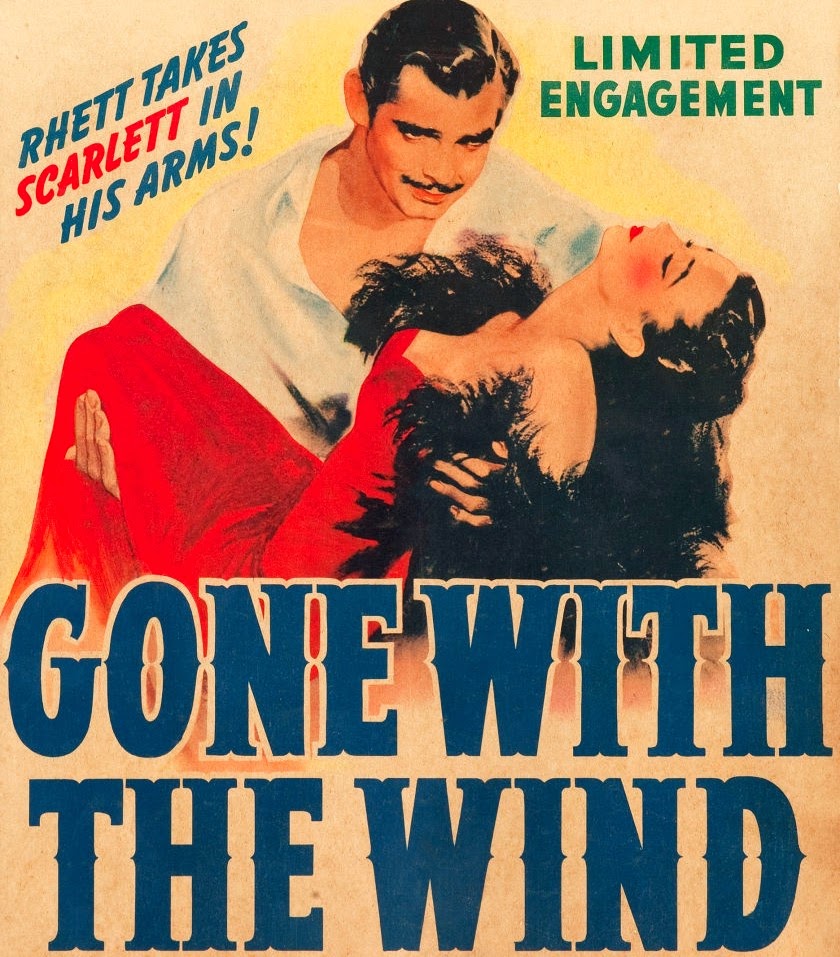 In case you haven’t heard, Scarlett’s Shantytown dress sold at auction for $137,000 this past weekend. The price isn’t too surprising if you factor in the starting price of $60,000, along with the auction house fee and the fact that the dress is a piece of cinematic history. 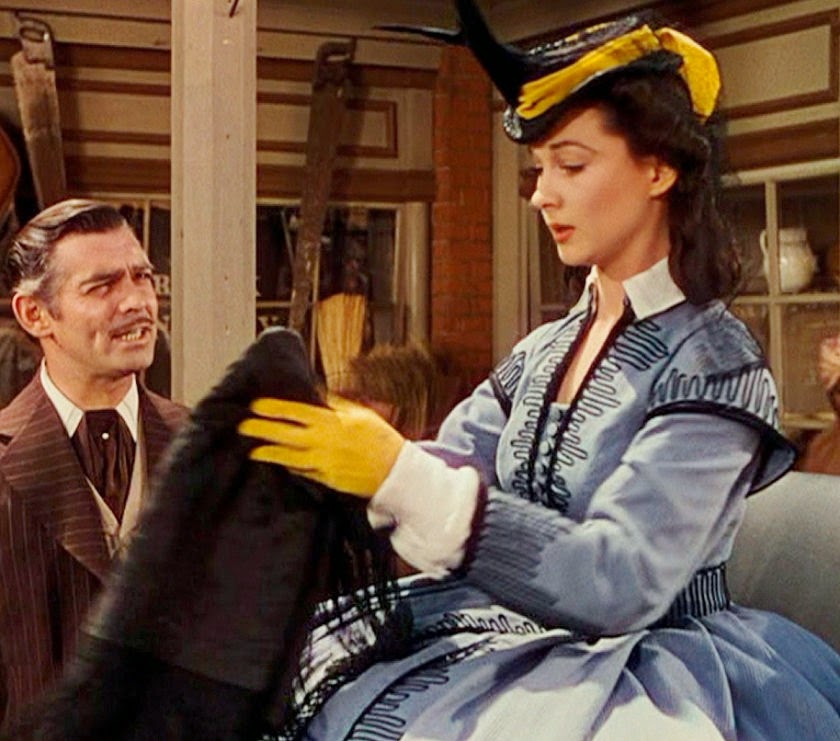 We first see Vivien Leigh in this dress, as Scarlett O’Hara, when she encounters Rhett, played by Clark Gable, outside her store. She drives off to take a short cut through Shantytown, where she’s attacked. Unfortunately, the color of the dress has faded over the years, from the blue-gray seen in the above photo to the light gray pictured below. The dress features a zigzag applique with decorative buttons on the front. It’s lined with silk and the skirt is pleated. 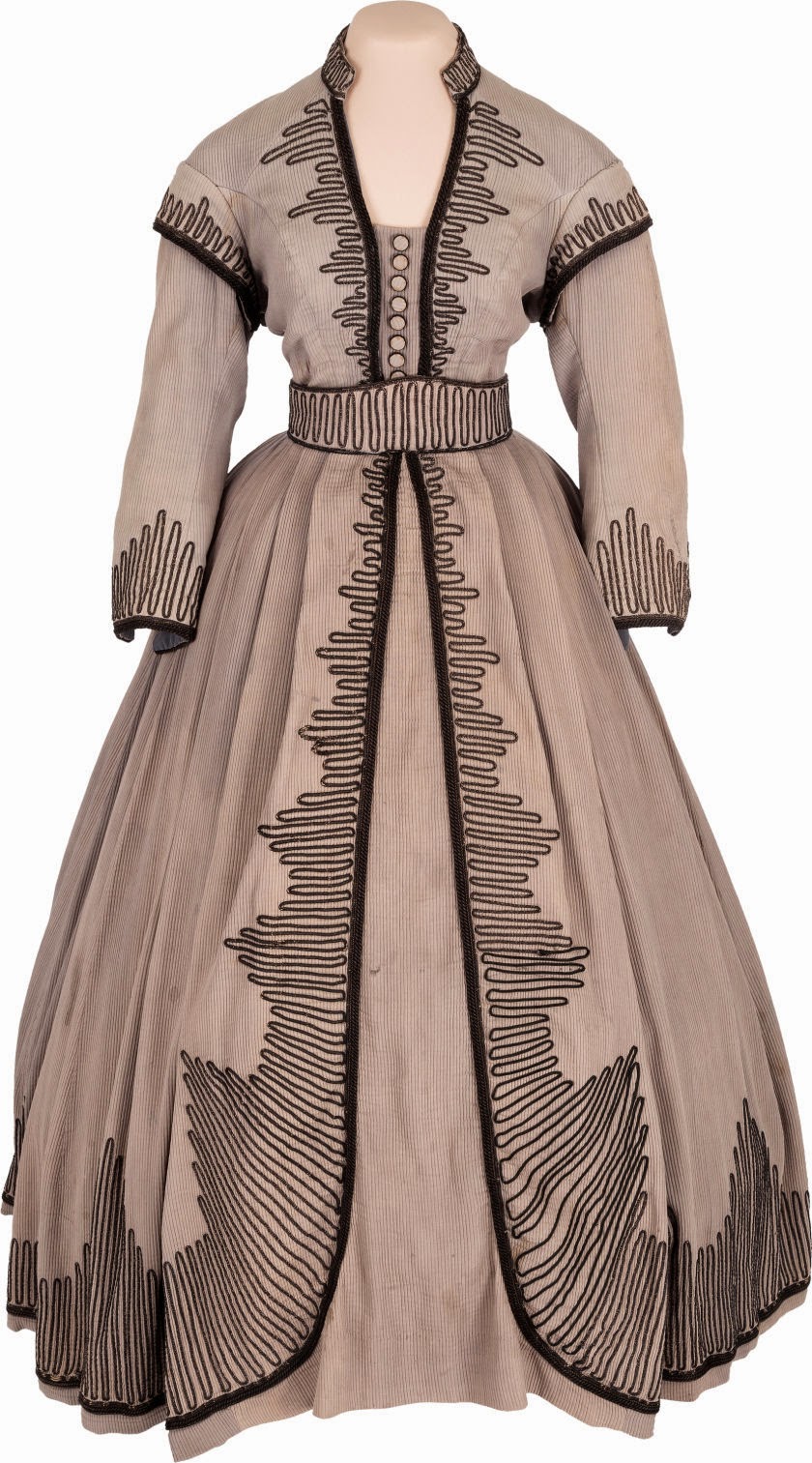 The auction pieces came from James Tumblin’s collection of Gone With the Wind memorabilia. Other items of interest that were sold include the hat Scarlett wears to the barbecue at Twelve Oaks along with a green sash made for the barbecue dress. This hat sold for $52,500 and the sash sold for $3,250. 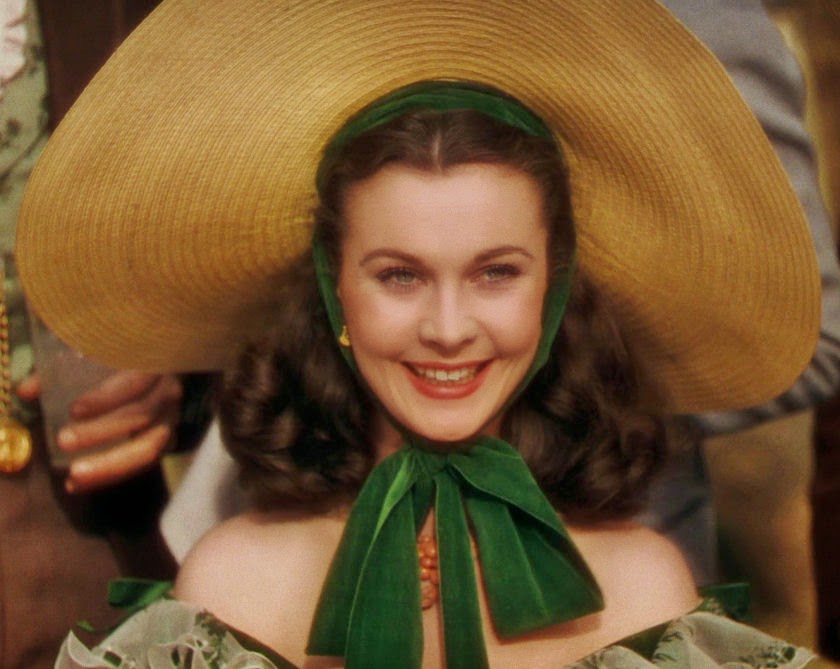 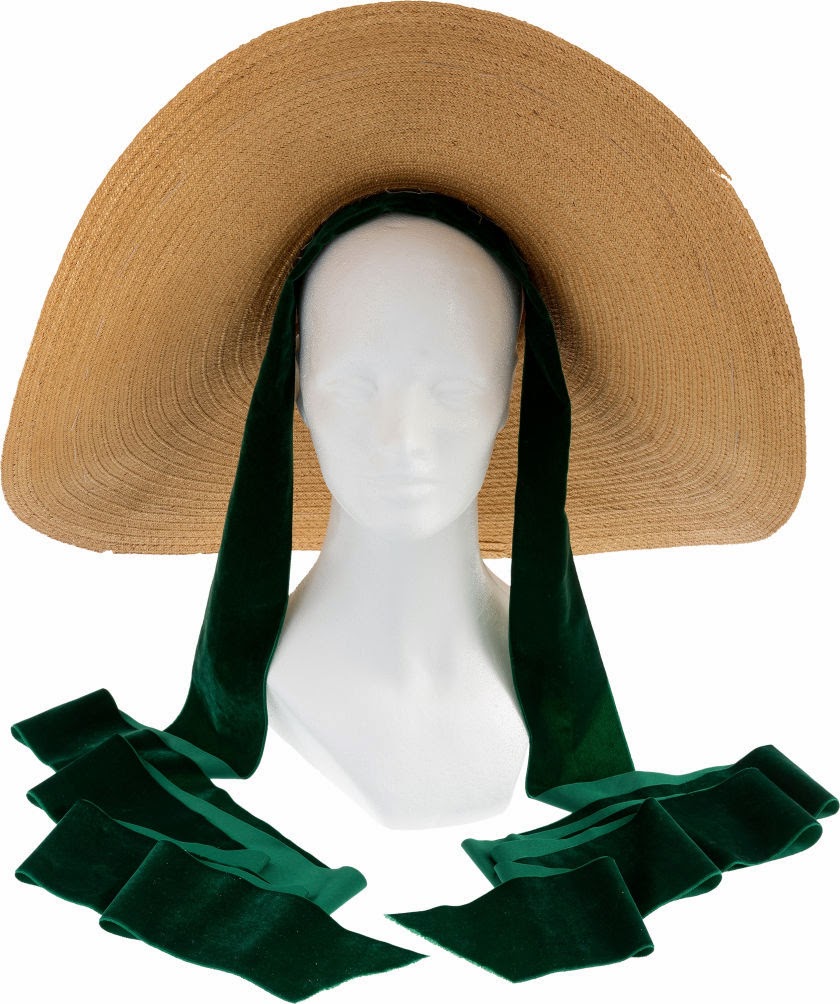 Another item on the auction block was the top half of one of Scarlett’s calico dresses, which sold for $32,500. James Tumblin says this was originally auctioned off by Vivien’s daughter, Suzanne Farrington, and subsequently purchased at Christie’s. Originally, there were approximately fourteen of these calico dresses made, in various stages of disrepair, as Scarlett wore this from working in the hospital in Atlanta until her return to Tara with Melanie and baby Beau. 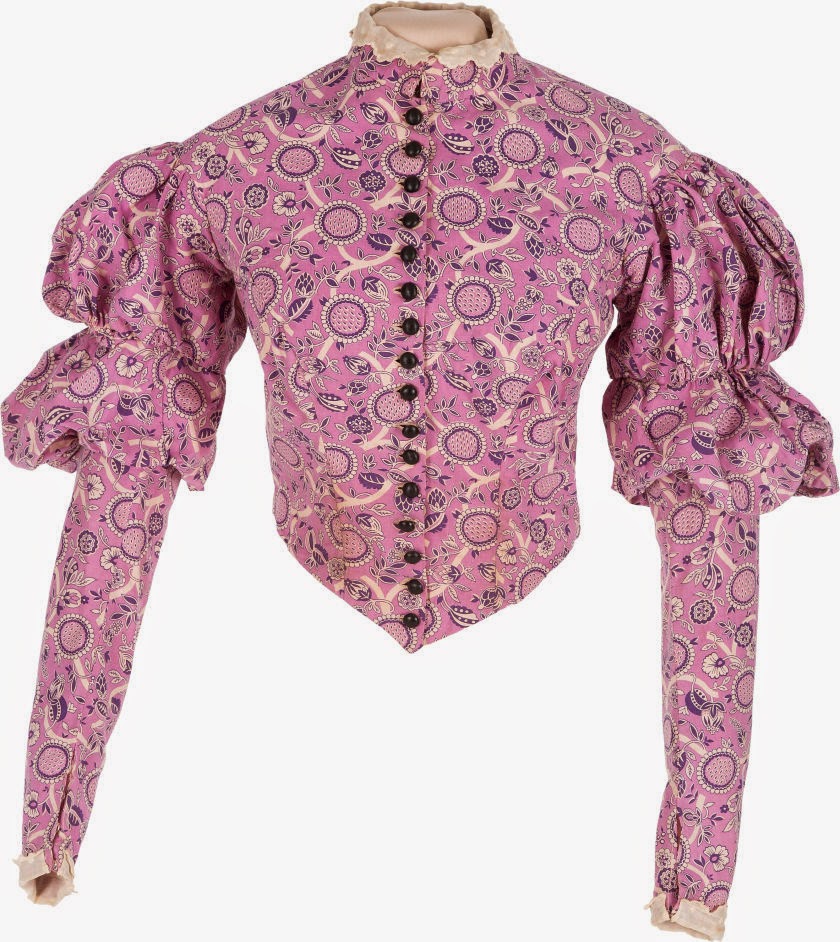 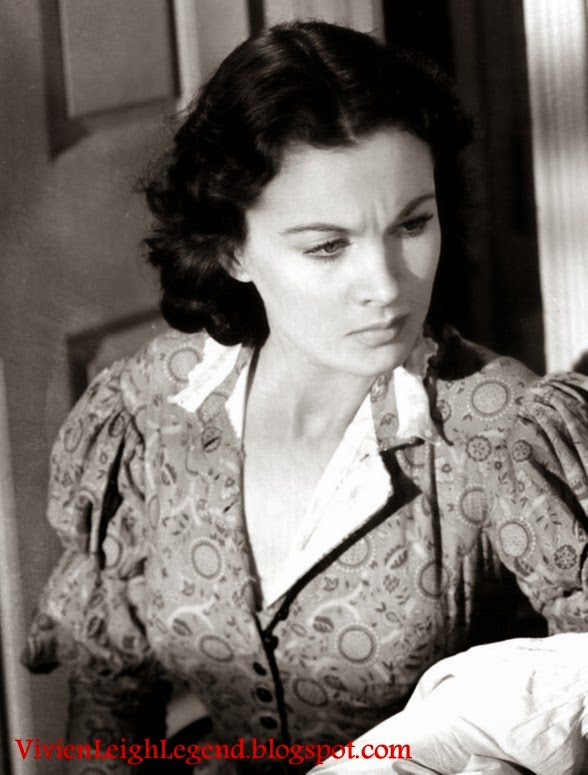 This suit worn by Clark Gable went under the hammer and sold for $55,000. It was worn during the scene when Scarlett tells Rhett she doesn’t want to have any more babies. He then proceeds to leave the room by kicking in the door and shouting no locked door would keep him out. 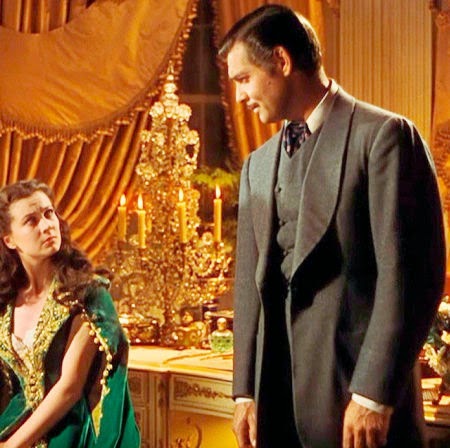 The ‘Return to Tara’ hat sold for $25,000 with eleven bidders vying for it. Vivien Leigh holds this hat in the scene where she and Rhett have returned from their honeymoon. 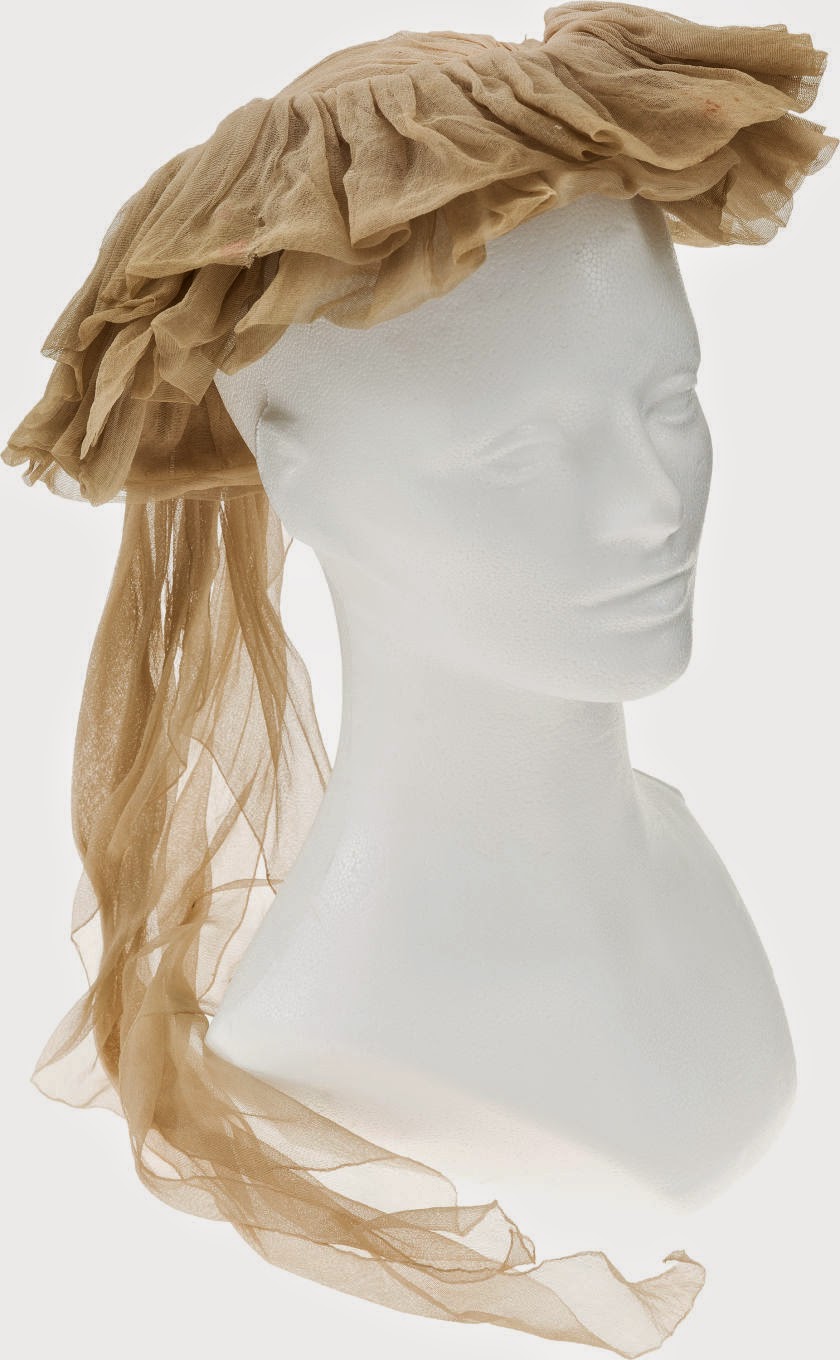 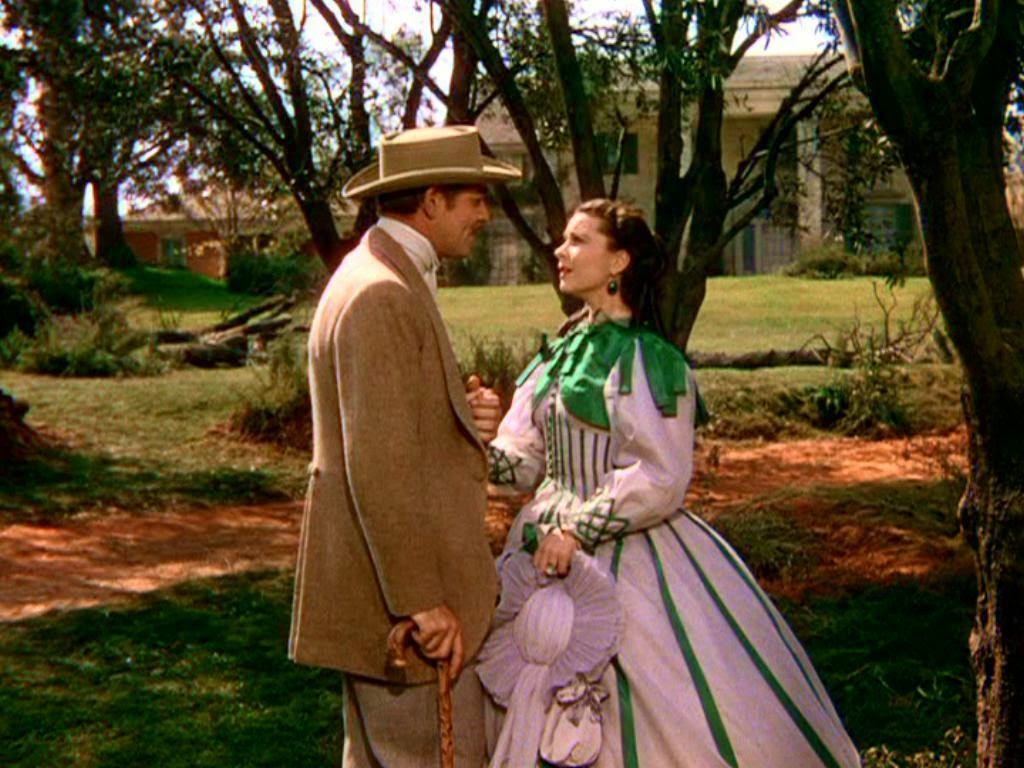 Olivia de Havilland, as Melanie Hamilton, is pictured below wearing her black bonnet. The bonnet, made from black silk, sold for $30,000 at this past weekend’s auction. Melanie wears this hat while she and Scarlett search for Ashley’s name (and thankfully don’t find it) on the recently deceased list handed out to the public. Then later, the bonnet is seen on Scarlett as she’s fleeing a burning Atlanta with Rhett, Melanie, Beau and Prissy. 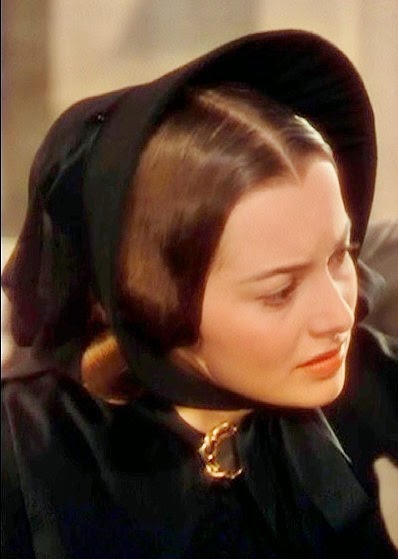 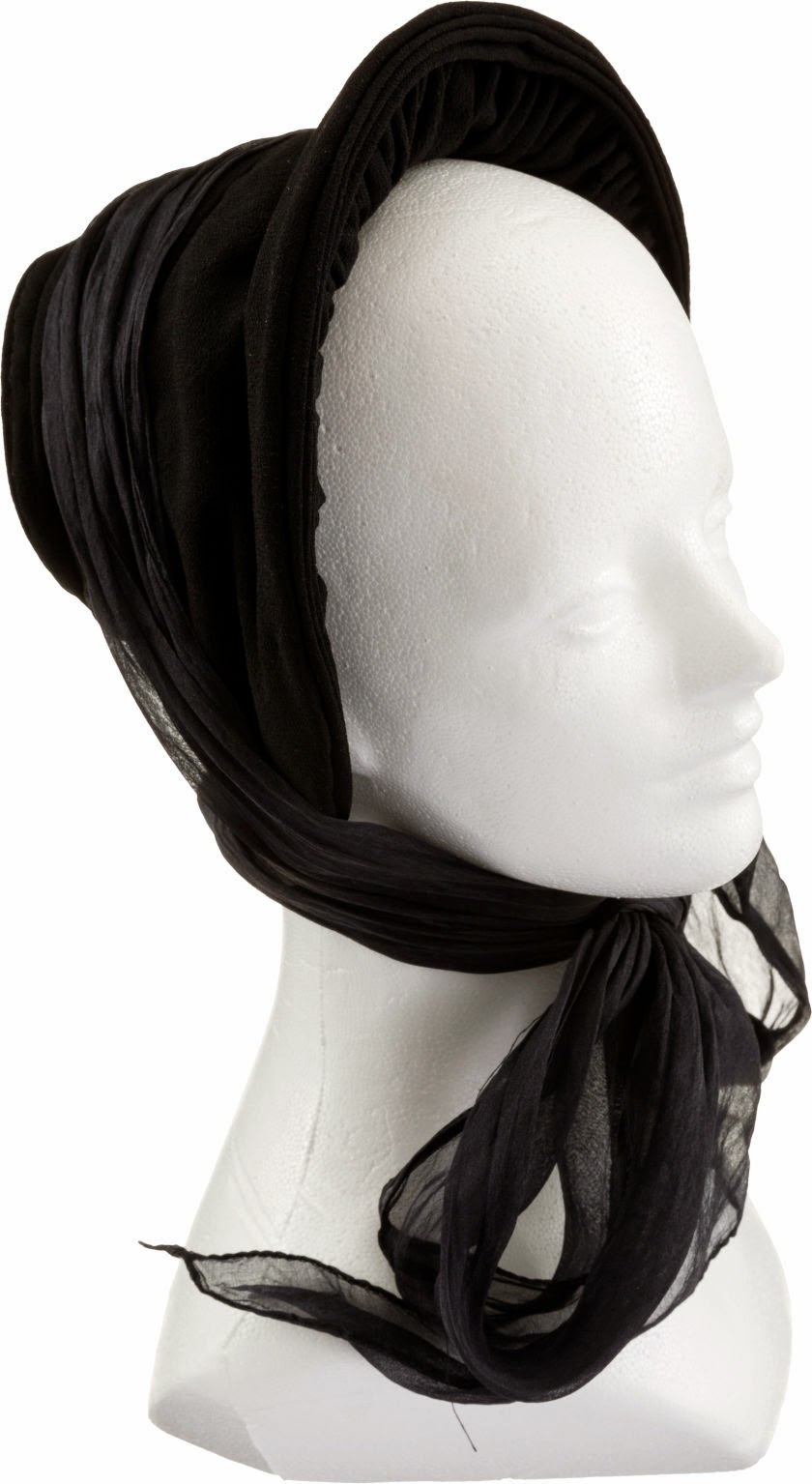 From the auction’s website: Interestingly, in Margaret Mitchell’s book, Scarlett takes Melanie’s hat from the hall table as she and the others make their escape. David O. Selznick, being the stickler for detail he was, had the hat made and sized for De Havilland and then had Leigh use the same one for her scenes, knowing it wouldn’t fit her correctly as it wasn’t supposed to as it wasn’t her hat! 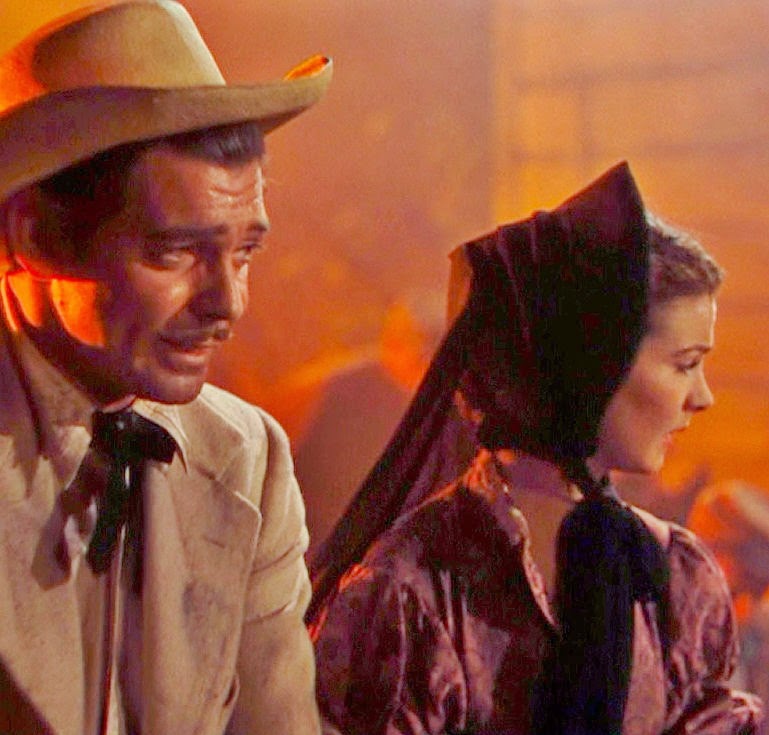 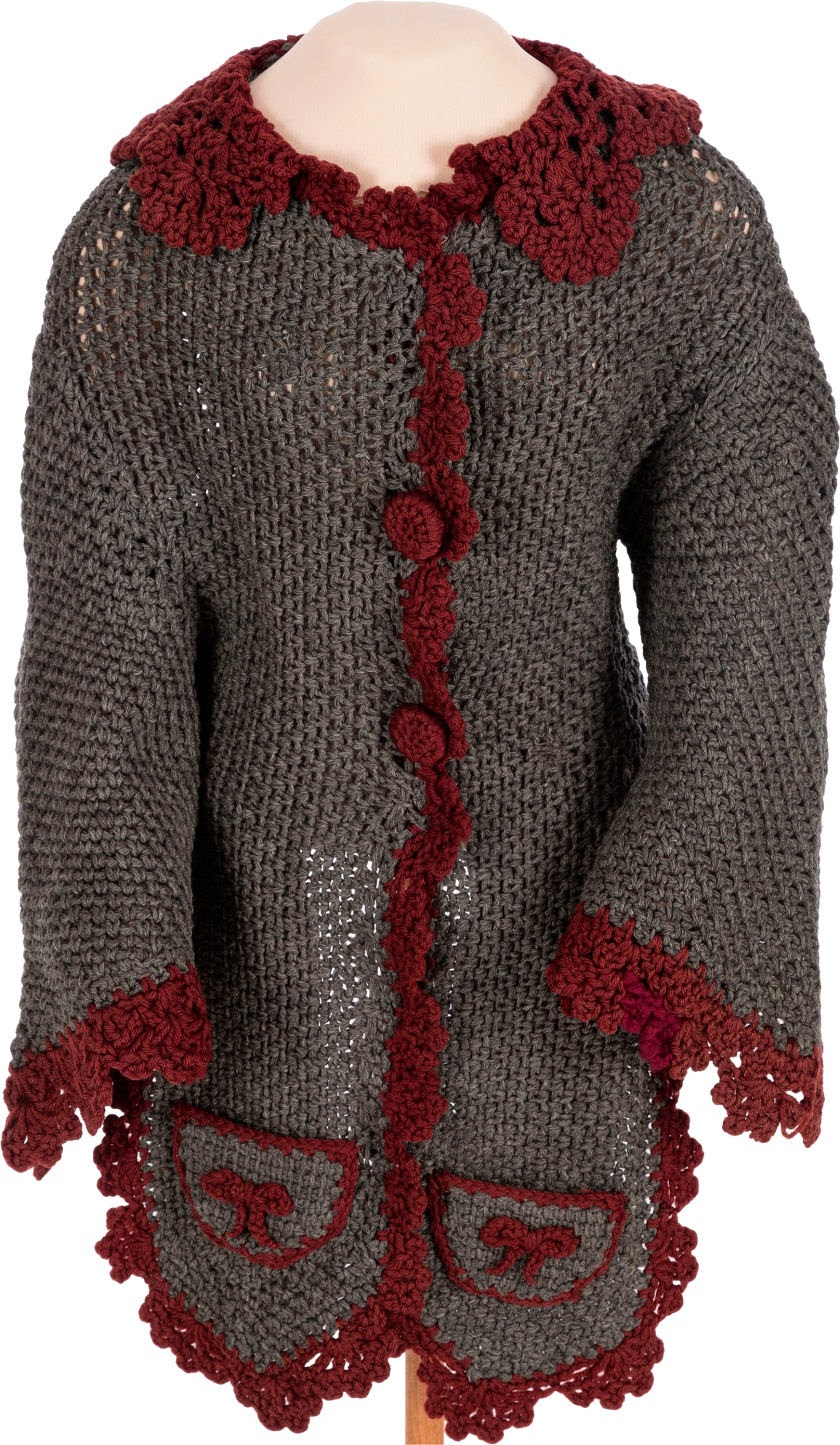 Olivia de Havilland as Melanie and Leslie Howard as Ashley greet each other at the train station. Ashley’s received a few days furlough for the Christmas Holidays. The sweater is seen again as Belle Watling, played by Ona Munson, meets Melanie outside the hospital. 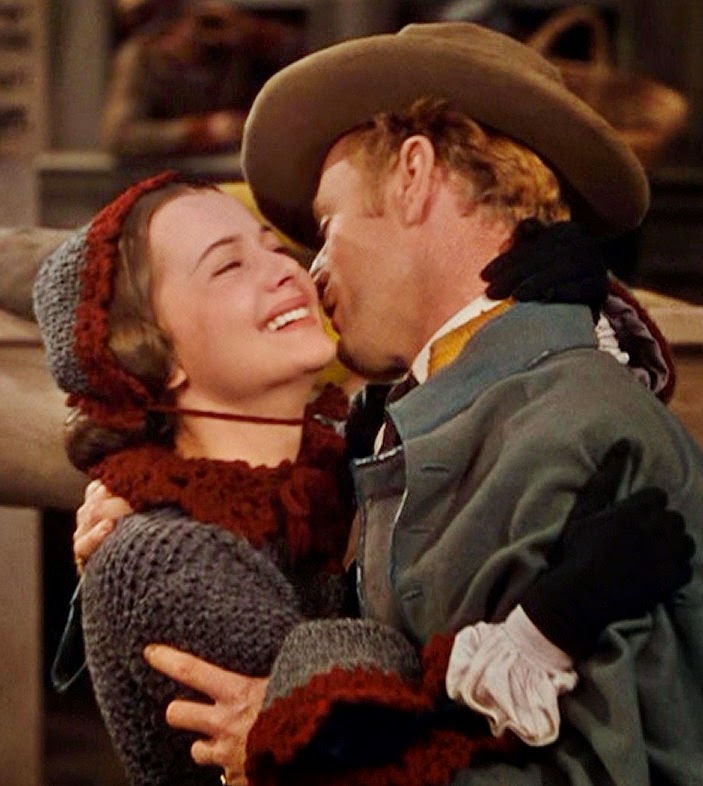 This scarf and brooch set, also Melanie’s, sold for $10,000. Another hand-knitted item, the scarf, now faded to purple, was made from navy blue wool and featured gray trim. The scarf was also used in auditions for the part of Melanie. 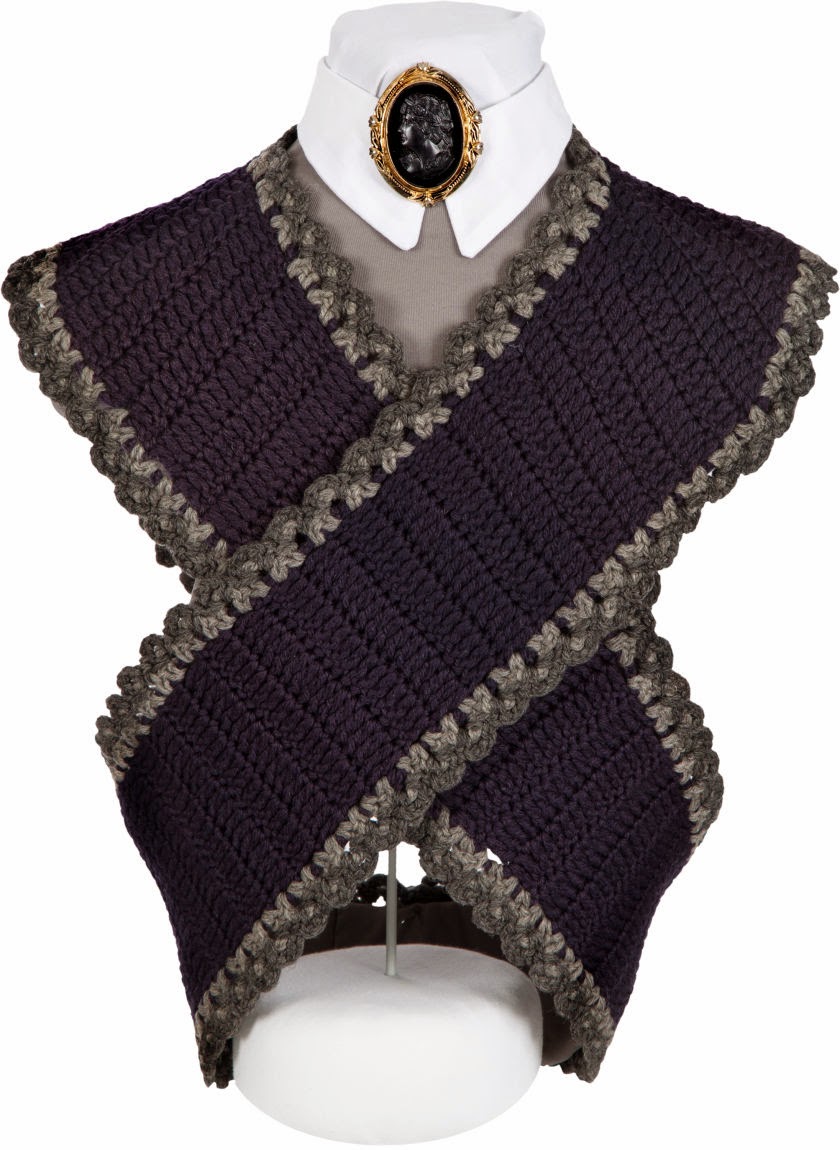 Olivia de Havilland originally gifted this cameo brooch to her stand-in, Ann Robinson, from whom James Tumblin acquired it. 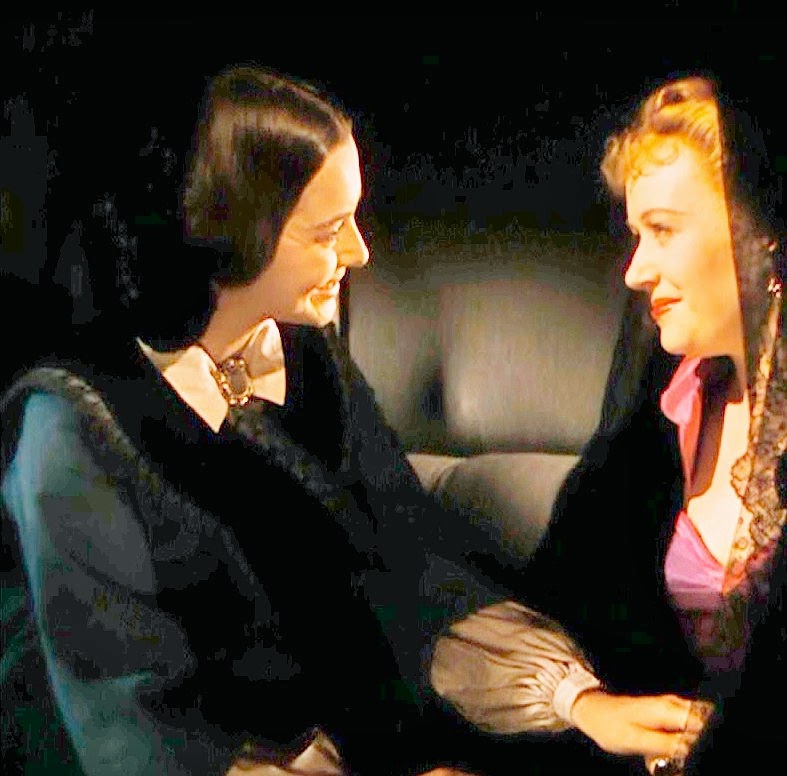 Ashley Wilkes’ Confederate uniform, minus its gold stars, sold for $16,250. Ashley, played by Leslie Howard, wears this uniform when he returns to Tara, after the end of the war. From the auction’s website: The jacket made of wool (now gray due to fading but originally blue), yellow wool collar and cuffs, decorative yellow detail on sleeves, seven button front closure (four buttons missing), blue wool patch on right elbow, purposely distressed with stitching, staining, and holes, ‘Selznick Int. Pictures Inc.’ label reads “20-108-M-33,” inside right sleeve has a ‘Western Costume Co.’ stamp; together with a pair of purposely distressed uniform pants with numerous holes, patches, and stitching evident as well as a tattered hem, ‘Western Costume Co.’ label and stamp in waistband. 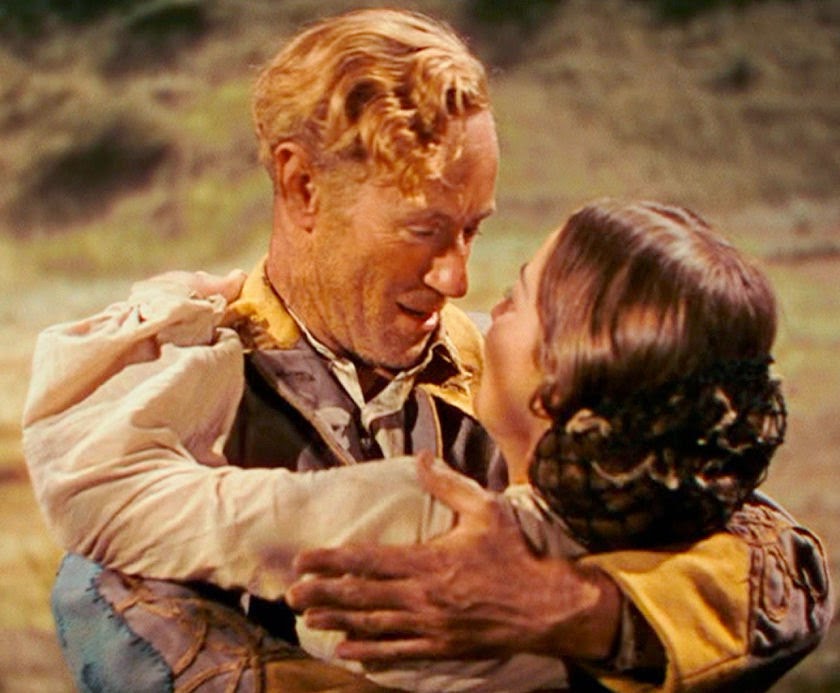 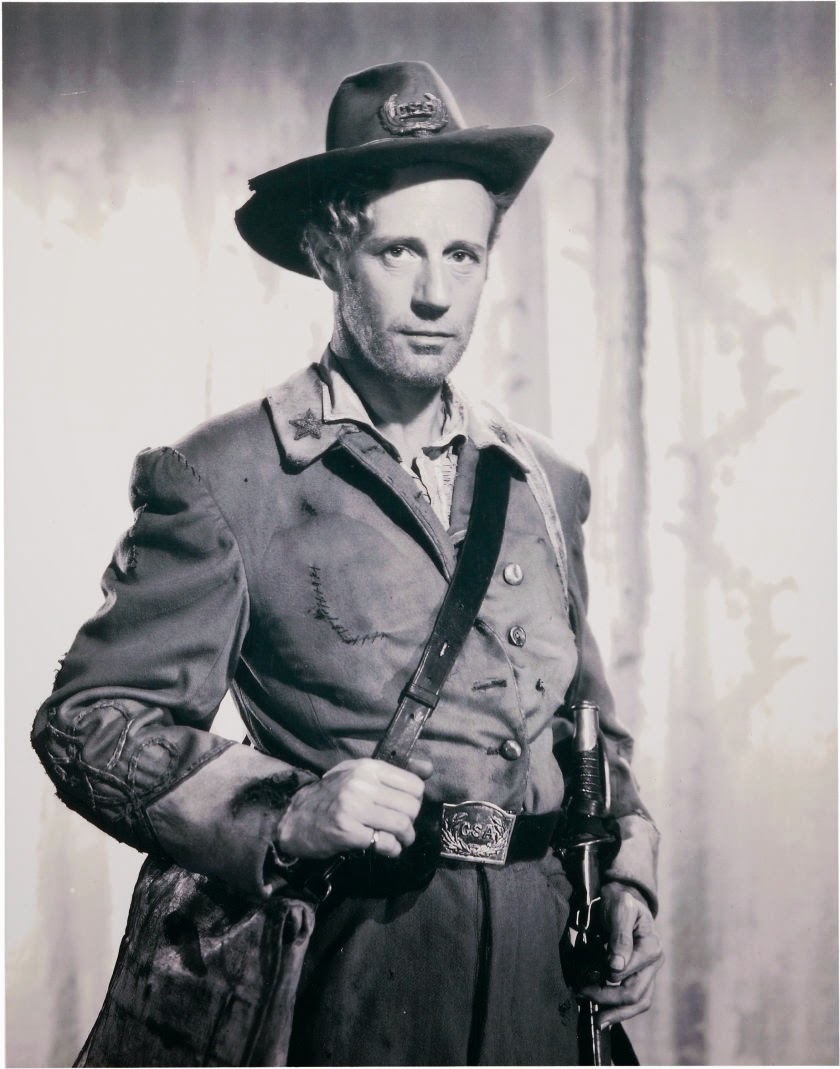 Ona Munson played Belle Watling in Gone With the Wind. One of her best known outfits is this red velvet costume she wears to visit Rhett while he’s in jail, just after Scarlett has left. Only the top half was available for auction, fetching $15,000. I think Belle would be proud. 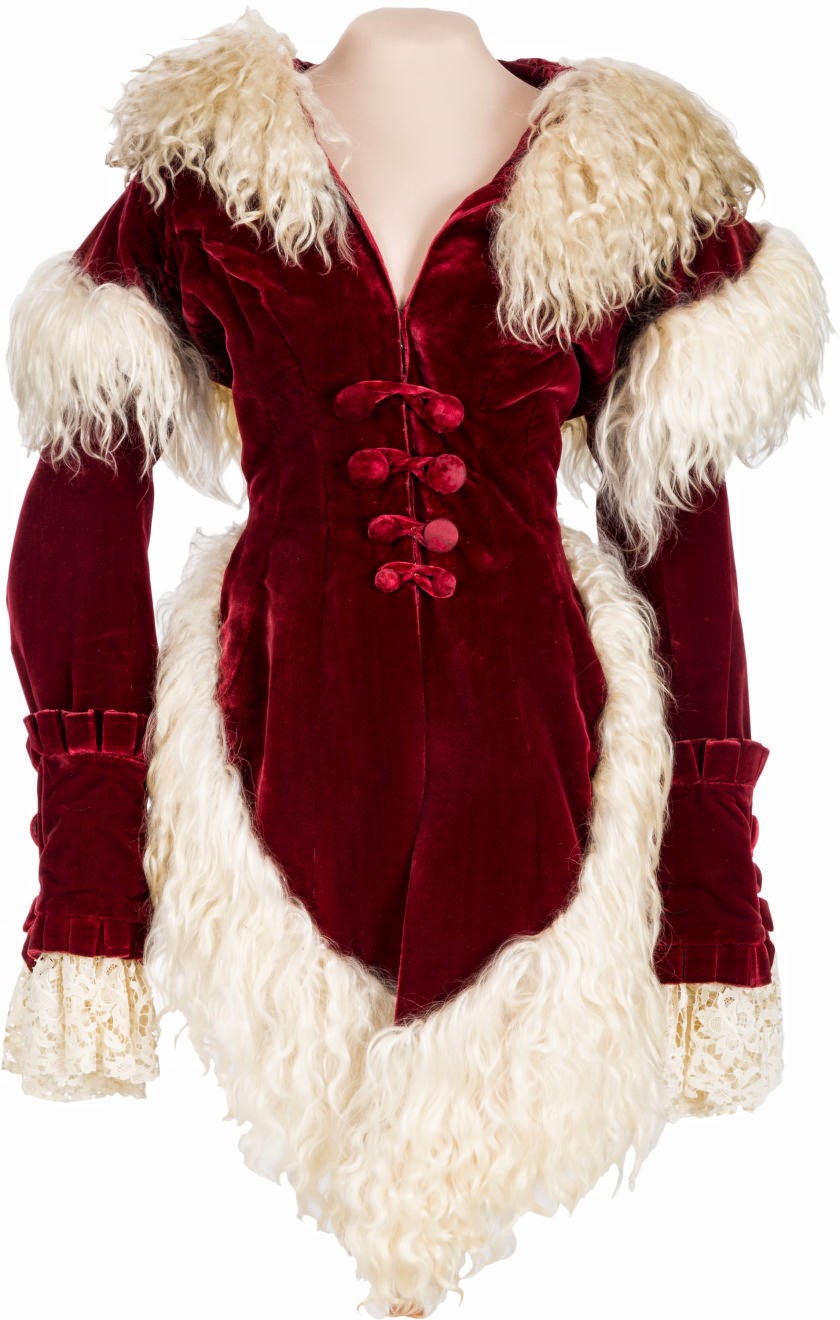 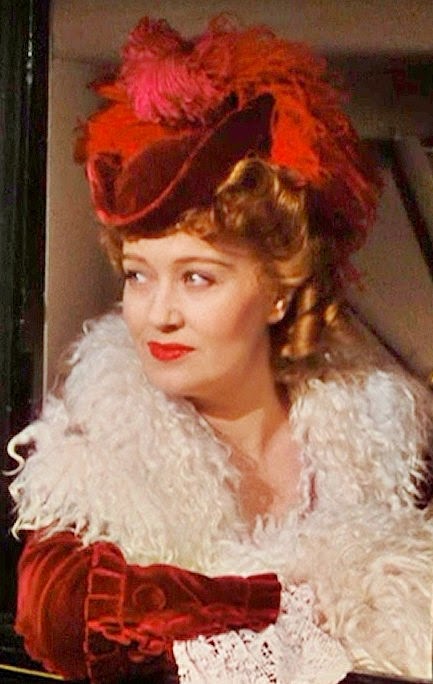 Adorable Cammie King was selected to play Scarlett and Rhett’s daughter, Bonnie Blue Butler. Her fatal riding habit went for $15,000. The hat and gloves are not the original ones Cammie wears in the movie, but are replacements. 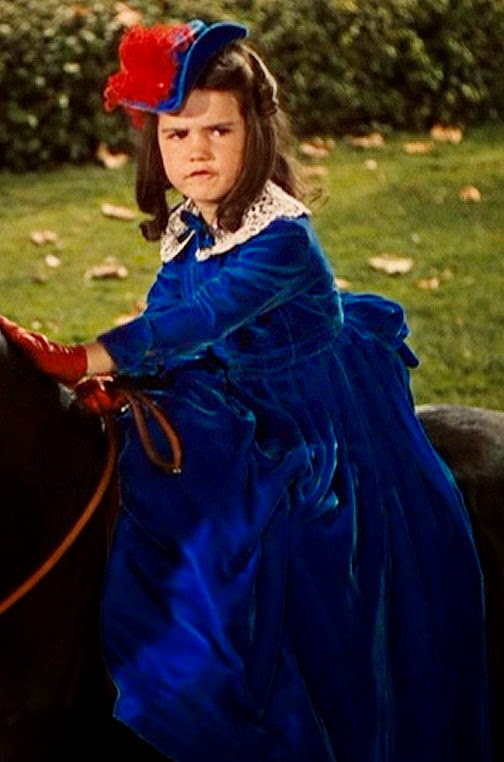 Additional information on other pieces from Gone With the Wind sold during this auction can be found at Heritage Auctions. Pictures of the costumes are from Heritage Auction’s website.