For this week’s Fashion Friday post, I’ll be taking a look at several of the costumes that Vivien Leigh wore in Anna Karenina. Based on Leo Tolstoy’s classic novel, Vivien filmed Anna Karenina at Shepperton Studios in 1947; the film premiered in London, in January 1948.

Anna Karenina was directed by Julien Duvivier, whom Vivien had nothing but kind words to say about his directorial style: Instead of shouting his instructions, which is sometimes embarrassing if one has made a mistake, he will always walk up and whisper them- not only to the leading actor or actress, but to individual members of the crowd.

While filming Anna Karenina, it was Vivien’s tendency to arrive at Shepperton Studios at around 7am, each morning. During downtime and on her lunch break, Vivien would do the Times crossword puzzle. She also enjoyed playing gin rummy on the set, usually beating her opponents!

The costumes for the movie were designed by Cecil Beaton and created by Karenska. Vivien wore approximately fifteen different costumes as Anna. One newspaper article noted that some costumes had to be duplicated, due to the fake rain and snow used in the movie. In a letter Cecil Beaton wrote to Greta Garbo, he said: By the end of one day’s shooting Anna’s sable cape looks like an old drowned rat, and the ostrich feathers in her hat look like the flu brush. Time and again Anna has to get out of the train, while the wind machines blow a mixture of perspex and salt and cement onto her.  Personally, I think it a lot of fun- and that is the part of the films I like the best- the imitation icicles and snow- the imitation train- but by now Vivien doesn’t share my views and she is thoroughly disgusted by the smell of the steam. (as shared by Hugo Vickers in Vivien Leigh).

I think color makes a great deal of difference to the mood of an actress; that the color she wears colors her performance. If, therefore, an actress dislikes a particular color, I believe she should have the right of refusal and in a picture of where I am Designing Director, she has that right. The grays, the dark greens, the burgundy are the sombre colors. White and the pale blues, such as you see in religious paintings, the colors of virginity, of purity and of peace. Pink, more than any other, is the color of frivolity.

The different moods you can create in costuming– what I enjoyed so much about costuming Anna Karenina and An Ideal Husband, one after the other, was that they were so different; give such a range of mood, manner and character. One, An Ideal Husband, a light, delightful trifle; the other, Anna Karenina, with the taste of doom, of fate, hanging over the different characters. Wonderful to go from the silly to the sombre, from Vivien Leigh’s grand passion to Paulette [Goddard], naughty Paulette, under the stigma of being rather fast…


[The clothes in Anna Karenina should have] quite an effect. The very long waistline, the tight, thin pointed waistline. The very 18th century shoulders. No shoulder seams. All cut on the cross as they were in the 18th century- and in these costumes Vivien looks charming, very charming, so neat and strong.

Designing is not, you see, a mere matter of a bow here, a bow there. Much more serious than that, much more serious. A very good designer should know, not only the measurements and the physical type of the woman for whom he is designing, but her character as well.

The first costume from Anna Karenina is this lovely outfit, which Vivien is wearing in this publicity photo. The silk dress and its cape are both black and green. A matching green and black hat sits on the back of her head and ties beneath her chin. 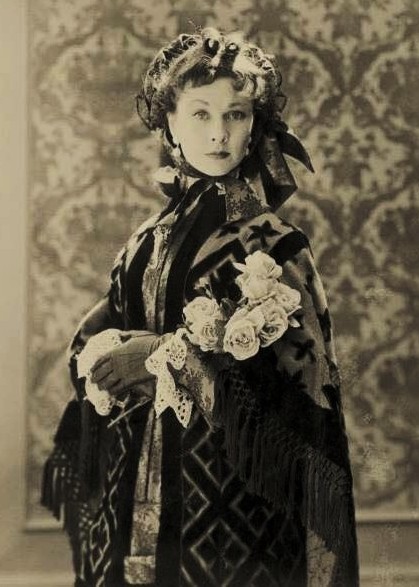 Her green and black shawl-like wrap is trimmed with a wide band of velvet, which is attached to a hand-made fringe. The wrap is decorated with stars and a geometric pattern. 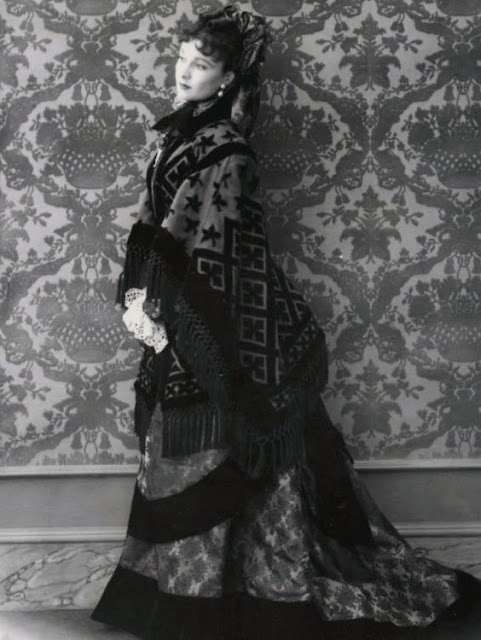 The bottom of the skirt features wide bands of black velvet, which contrasts against the silk pattern of the dress. The dress Vivien’s wearing, beneath her shawl, is pictured below. In this picture, we get a better view of the gown’s design, along with its wide, lace cuffs. The frilly lace collar is set off by a brooch pinned bow. 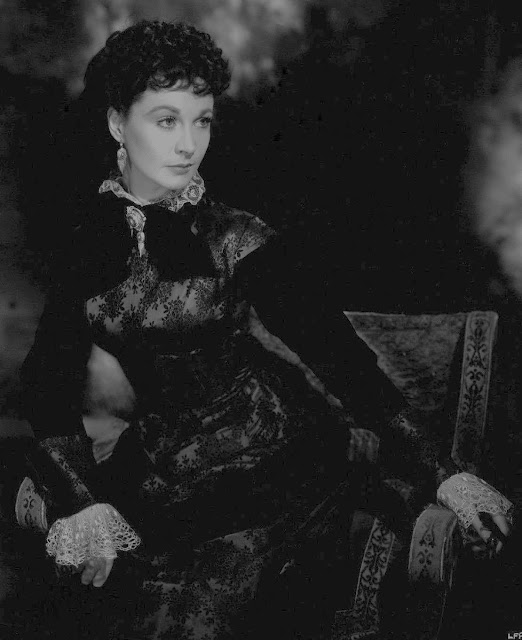 This next costume is a gorgeous, form-fitting day dress which holds a classic, timeless appeal. The structured, burgundy gown is made from wool and velvet. 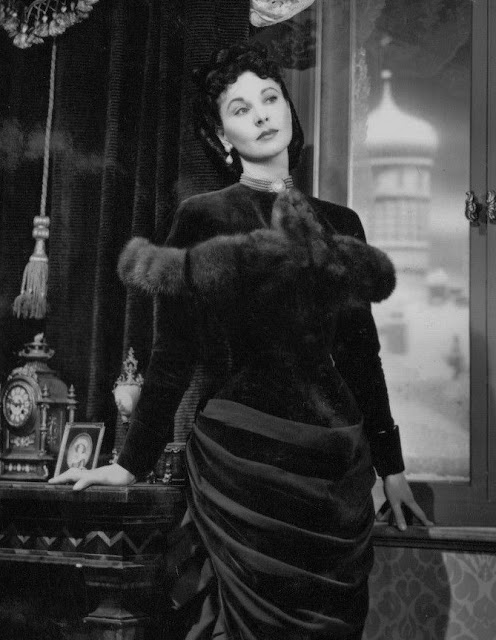 The gown features a sable trimmed capelet, which covers the shoulders. In his biography, Vivien Leigh, Hugo Vickers relays the following snippet from a letter Vivien sent to Bernard Berenson in June, 1947: There has been a heat wave during which I have had to pretend I was living in Moscow in deepest winter! –covered in velvets and sables and corseted down to 19 inches. I thought this last would gain me some sympathy when I told Larry. But not a bit of it. He too is corseted and pretending it’s winter in Elsinore! It really does seem a strange way of earning a living sometimes. 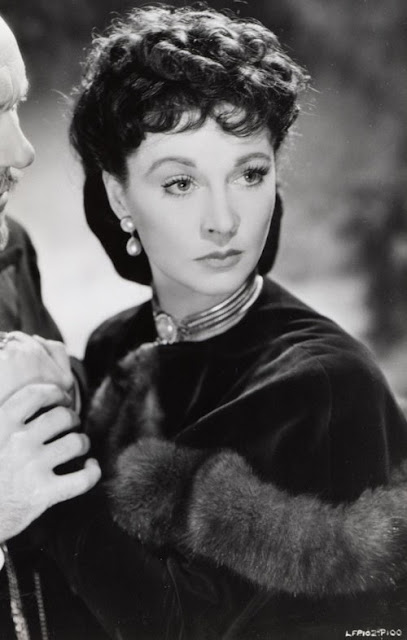 The overskirt, with its asymmetrical pleated hem, is folded into bands and gathered toward the back, creating a fabulous silhouette for Vivien. The excess material creates a small, bustle like effect in the back of the dress. The underskirt falls to the floor and features a small train. 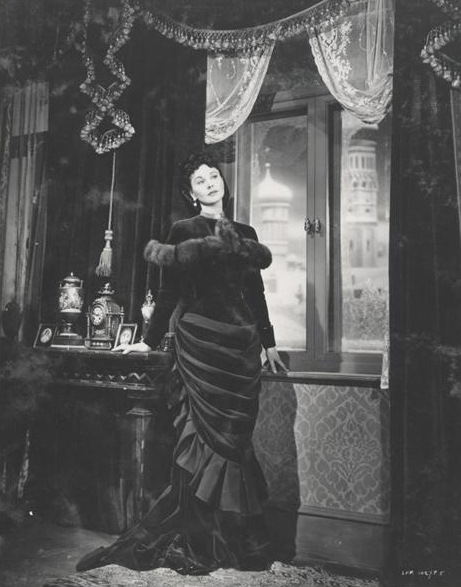 Vivien poses in this next publicity photo while wearing a stunning lilac gown, which would be amazing to see in color. The satin bodice features a large peek-a-boo cutout, while the bottom part of the basque angles away from the front of the dress. 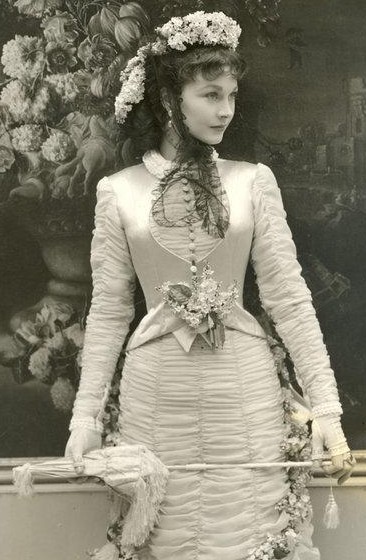 The silk dress features multiple rows of narrow, plaited ruffles from the neck to the bottom, where the gown ends in pleated ruffles. Vivien wears fingerless gloves and carries a matching umbrella trimmed in fringe. 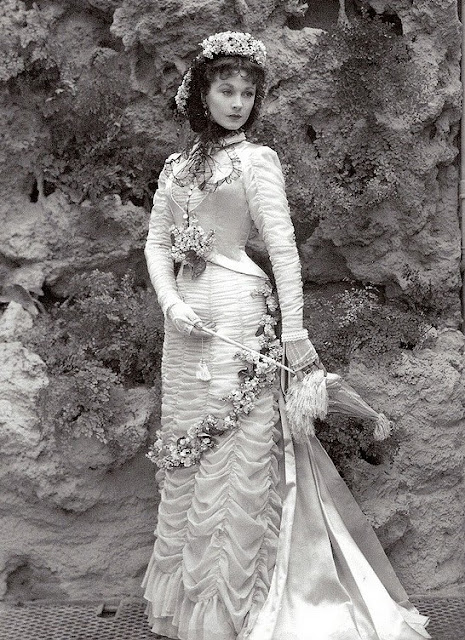 Vivien’s curls are topped with a lovely hat ornamented with lilacs, to match the color of the dress. Black lace falls from the cap to tie beneath the chin.
Lilacs are also used as decoration on the gown. A small bouquet of lilacs are pinned to the front of the bodice, while a long garland of lilacs drapes itself across the lower part of the body. The garland loops from one side of the gown to the other, dipping down to the knees before rising back to the other side.

This next outfit is my favorite costume from Anna Karenina. Vivien is absolutely stunning in this outfit. The dress features a short waisted jacket, made from white silk and black velvet. The black velvet lapels perfectly sets off the lacy, white collar. The jacket’s silk sleeves end in a swath of black velvet, with long, lacy cuffs spilling out from the sleeves. 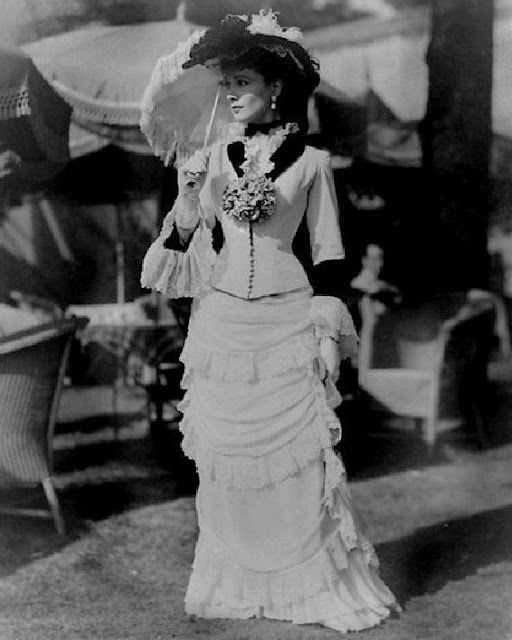 The back of the jacket ends with a wide, black velvet train, that travels down to the floor. The white skirt features multiple layers of organdy draped across the body. Each layer ends in a band of pleated lace ruffles, which match the costume’s cuffs and collar. 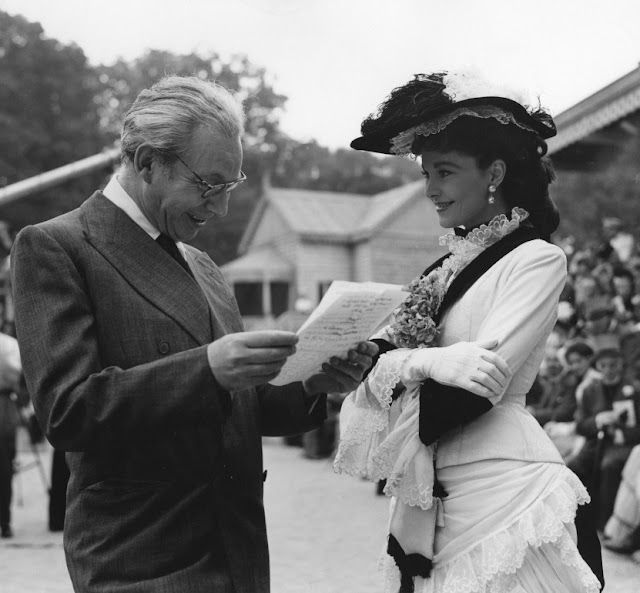 Vivien’s hat is constructed from white lace and black velvet. The hat is topped with black and white ostrich feathers, with a black velvet band of ribbon dangling down the back.

In the picture below, one gets a better view of the jacket’s lacy collar, which is mostly hidden by the bouquet pinned to it in the above pictures. I think the dress looks better without the bouquet. 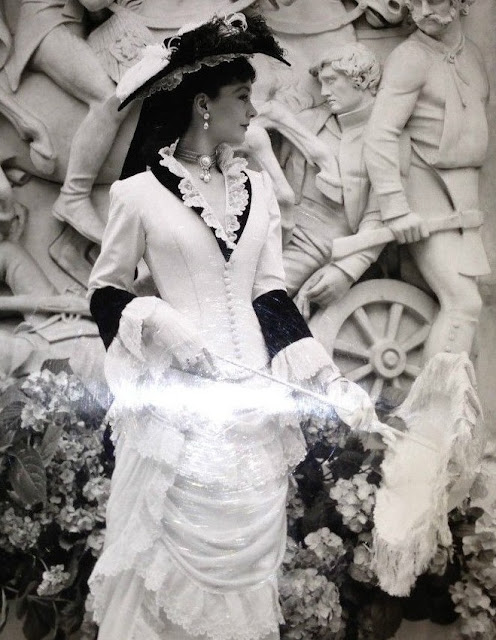 This sumptuous, black ball gown is made from velvet, satin and taffeta. Multiple shades of black, along with different materials, make for a glamorous night out in this gown. 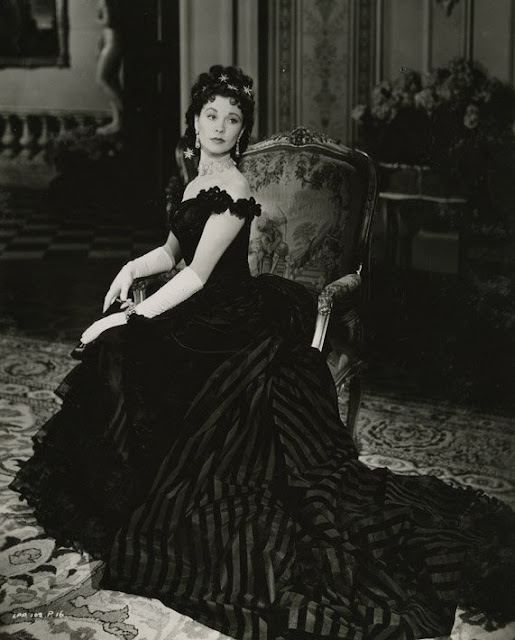 The gown features a low cut bodice, with off the shoulder decolletage. Extreme decolletage as I designed…can be, according to the woman who wears it, and how she wears it, very naughty; or it can be as decorous as the sable capes and sombre shades I gave Vivien Leigh… -Cecil Beaton

The long-waisted bodice is called a cuirass basque. These were usually boned to mold a woman’s body into a ‘pleasing’ feminine form. I only hope that if Vivien dropped anything on the floor, she had someone nearby to pick it up for her! 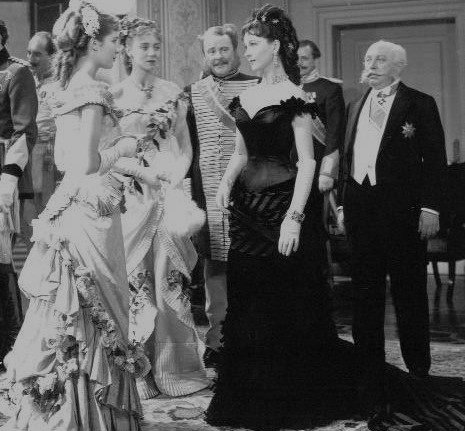 In the front, the ball gown ends in long rows of narrow, plaited ruffles.The striped material is draped across the front, then gathered upward toward the back, ending in a gloriously long train. Back in the 1870s, this was known as a peacock train. 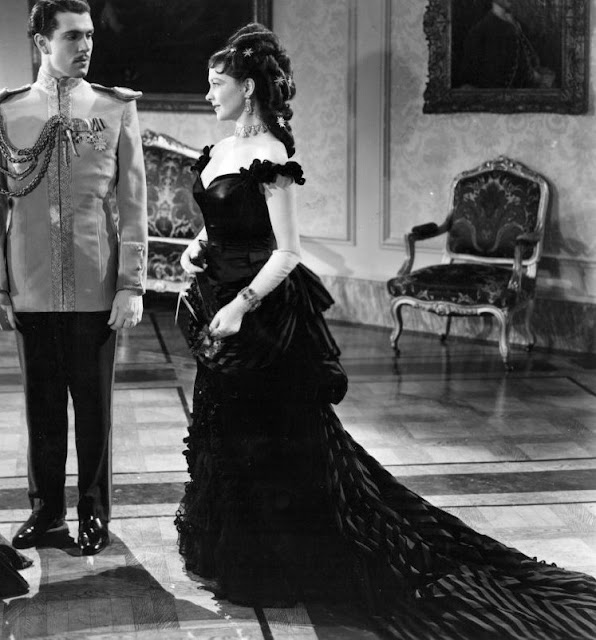 Cecil Beaton created another wonderful evening gown for Vivien to wear as Anna, this time in white silk and gold lamé. Color wise, it’s a complete one-eighty from the black ball gown. 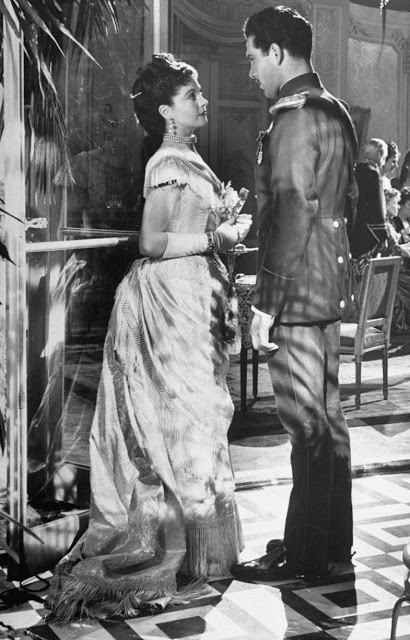 This evening gown begins with a low-cut bodice, which is trimmed in a white silk fringe at the top and bottom of the basque. The overskirt is draped across the body in an apron effect and trimmed with a white silk fringe. The underskirt also features the same fringe, ending in a small train in the back. Diamantes add an extra touch of elegance to this gown. 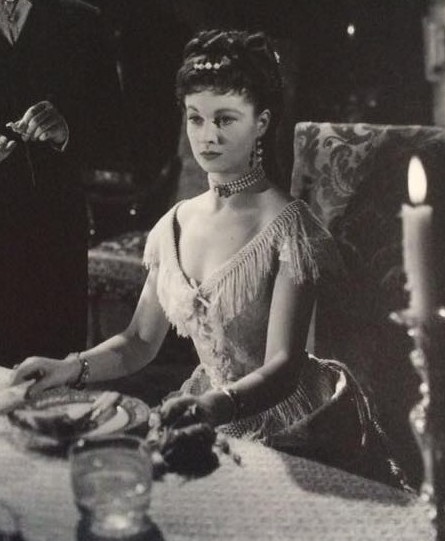 This next outfit was sold at auction a few years ago by Bonhams. The high bidder paid $2,585 USD for this lovely costume. The website’s description is simply Green velvet gown with chiffon bodice and bolero jacket. 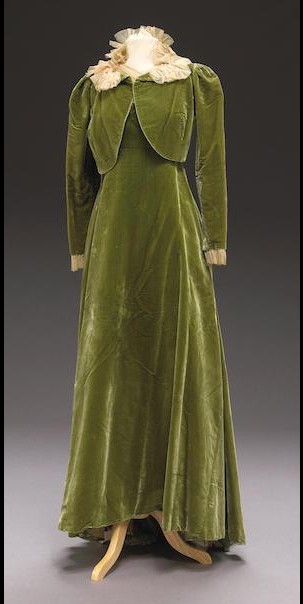 From these color photographs of the gown, it’s easy to see that the collar and cuffs were also made from white chiffon, and shaped into pleated ruffles. I’ll have to rewatch Anna Karenina to figure out when Vivien wears this costume in the movie. 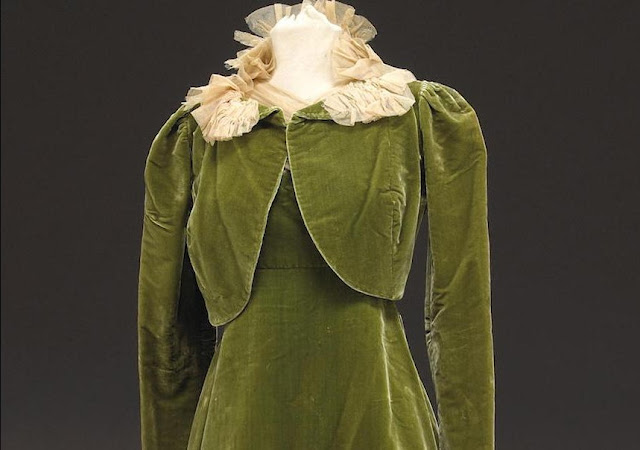 Years later, in looking back over her career, Vivien Leigh would cite Anna Karenina as a regret: My mistakes were doing the films of Anna Karenina and The Deep Blue Sea and appearing in the farce Look After Lulu, which was totally embarrassing.

Vivien may have regretted doing Anna Karenina, but I don’t regret how marvelous she looks in these costumes. Cecil Beaton did an outstanding job as designer.

The Knight Was Made For Love

11 Things About Vivien Leigh & the Oscars