That Hamilton Woman! is a 1941 movie about the real-life romance of Emma Hamilton and Horatio Nelson, starring Vivien Leigh and Laurence Olivier. René Hubert, the man tapped to be the costume designer for the film, was no stranger to Vivien. He had previously worked with her on three movies:  Fire Over England, Dark Journey and A Yank at Oxford. René was born in Switzerland, in 1895.

When it came to fashion, René’s motto was that a woman should dress her personality, then everything else would fall into place. Your clothes must never overshadow you. You must triumph over them, for beauty’s greatest asset is the lack of self-consciousness. René designed many sets and costumes for revues/plays in Europe, including designs for Max Reinhardt. By the age of thirty, his most famous client was Gloria Swanson, whom he began designing for in 1925. During his career, Rene received two Oscar nominations for costume design: Desiree, 1954 and The Visit, 1964.

That Hamilton Woman! opens at the British Embassy in Naples. We catch our first glimpse of Vivien as the young Emma as she arrives in Naples, along with her mother, at the home of Sir William Hamilton.

Vivien wears a large hat, based on one from a George Romney painting of Emma Hamilton. The hat features oversized black bows on top and a streaming, grey chiffon, scarf wraps around Vivien’s chin. She wears a floor-length grey cape, with a multi-tiered capelet. Beneath the cape she wears a matching grey, chiffon dress cinched at the waist with a black sash. The close-fitting, long sleeves of the dress end in a small ruffle at each wrist. 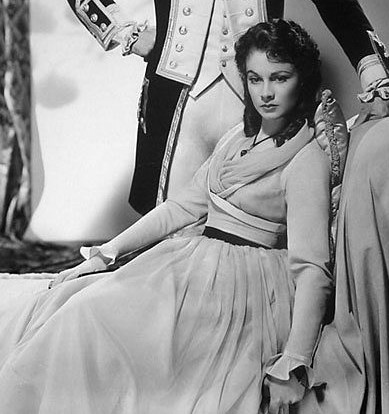 Sir William arranges to dine alone with Emma on her first night in Naples. The costume for this scene is a sweet dress made from a light, pink organza. The dress features elbow length sleeves, with banded ribbon midway through the sleeves and a low, ruffled collar, which extends to the shoulders, covering the bodice. A large, pink bow sits in the center of the ruffled collar. 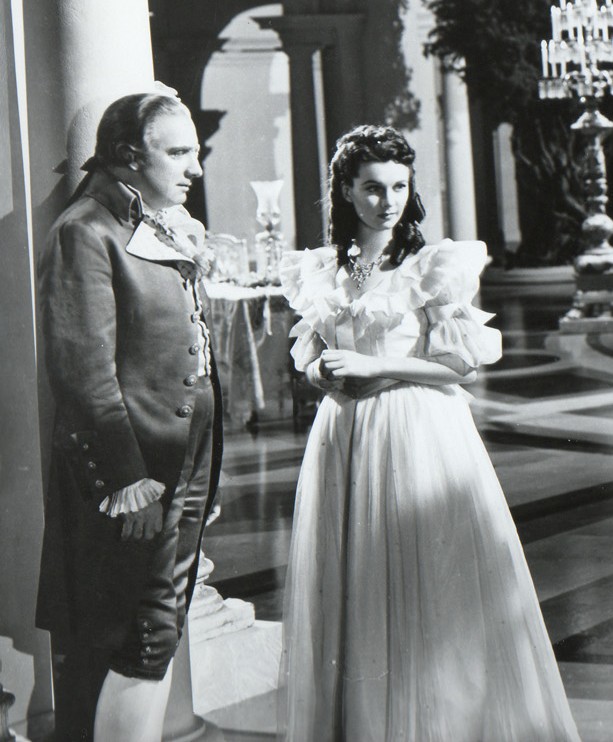 Vivien wears a super-cute, three piece, sailor outfit, which reflects the colors of the British flag (red, white and blue). The gown features a long, pleated, chiffon dress. The skirt portion is highlighted by light blue stripes. The dress is topped off with a red, double-breasted waistcoat made from red moire (a silk fabric with a wavy pattern). Over the waistcoat, Vivien wears a short, bolero jacket made from blue silk. 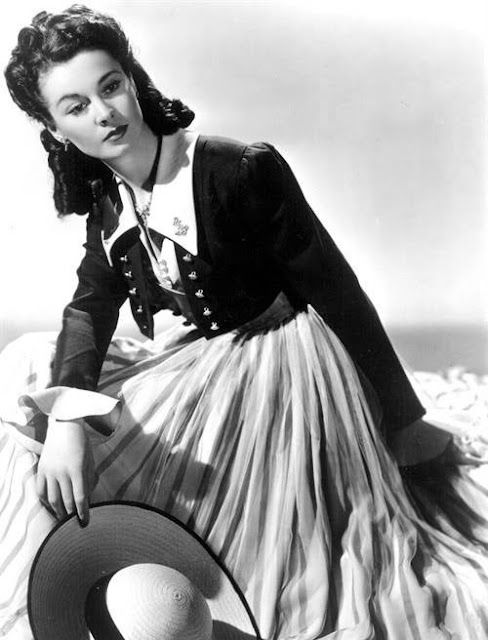 Brass buttons are lined up in neat little double rows, running down both the vest and the jacket. The nautical theme continues with Vivien’s jewelry. She wears an anchor necklace and anchor earrings. Her white collar also features gold anchors; one pinned to each side.  Vivien’s curls are crowned by a straw hat, with an upturned brim, trimmed in blue ribbon. 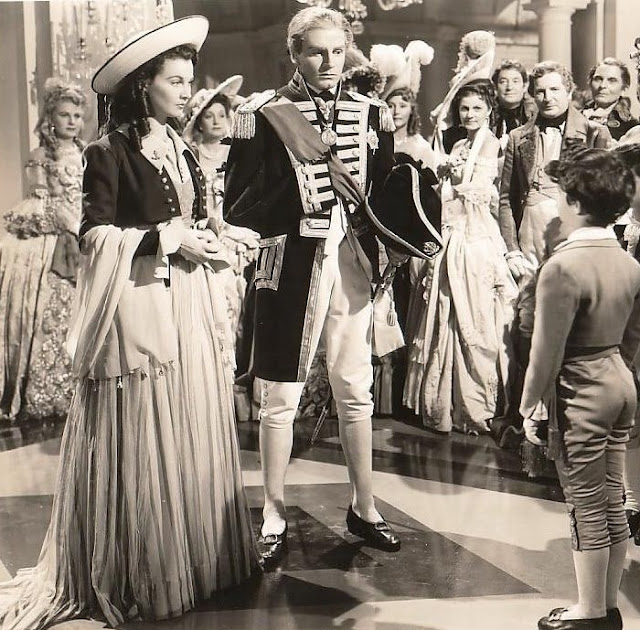 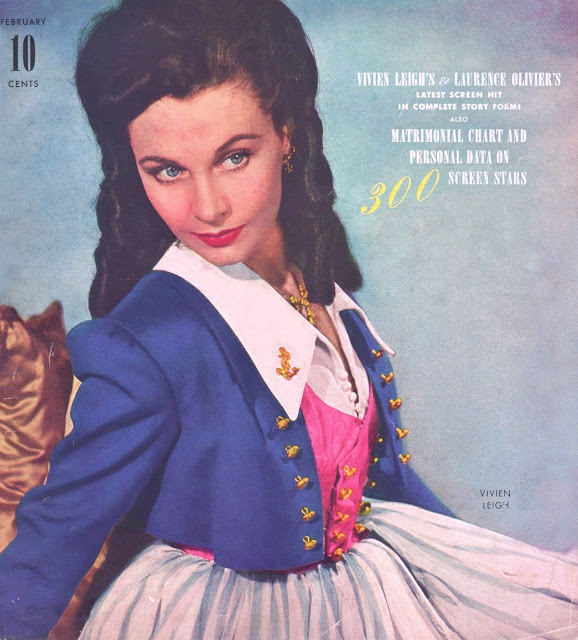 Next up is the costume I’ve dubbed the opera gown. This particular ball gown is only shown briefly as Emma and Nelson attend the opera. Later, at an inn, we catch a fleeting glimpse of the dress beneath Emma’s cape. Unfortunately, I wasn’t able to find a full length photograph of the gown by itself. 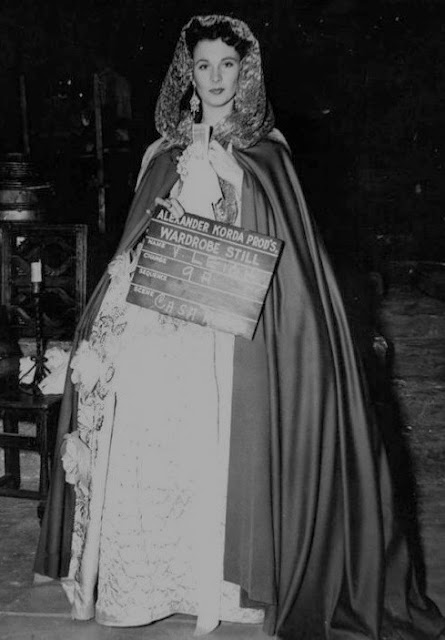 The ball gown is made from blue satin, which is draped over side hoops, leaving the front and back more or less flat (which I’m sure Vivien appreciated after wearing those wide hooped skirts in GWTW!). Pink chiffon roses are sewn onto the dress, contrasting with the blue satin. The leaves and stems for the roses are embroidered directly onto the gown’s fabric in a silver thread and are embellished with tiny rhinestones. The underskirt is a heavy satin, with diamond shapes studded with more rhinestones. The entire outfit is topped off by an enormous hat, adorned with pink chiffon roses and ostrich feathers. 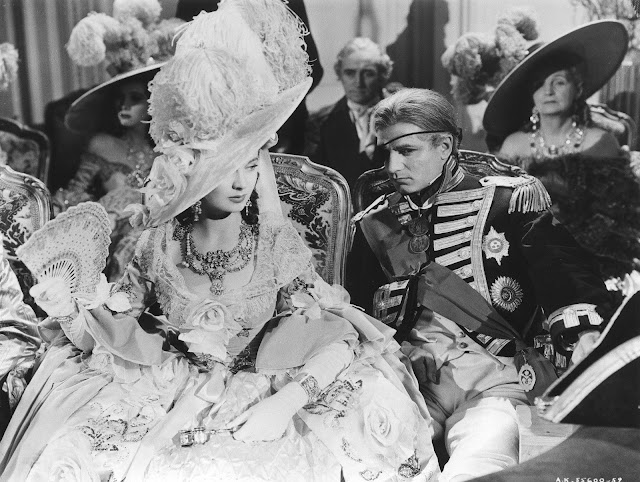 Vivien stuns in this next costume, which is another glamorous ball gown. The gown features a tight fighting, silver bodice with short sleeves. The skirt flounces out over side hoops for a dazzling effect, especially when Vivien, as Emma, runs through the palace in search of Nelson! The black chiffon skirt features a large, silver pattern with an overlay of black netting, studded with diamantes. 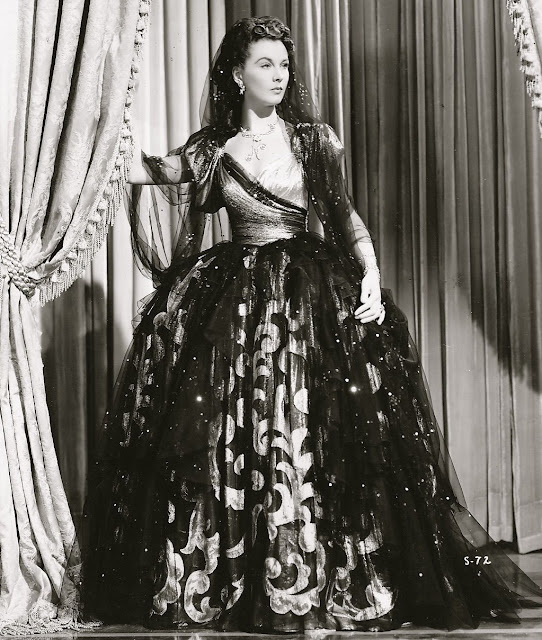 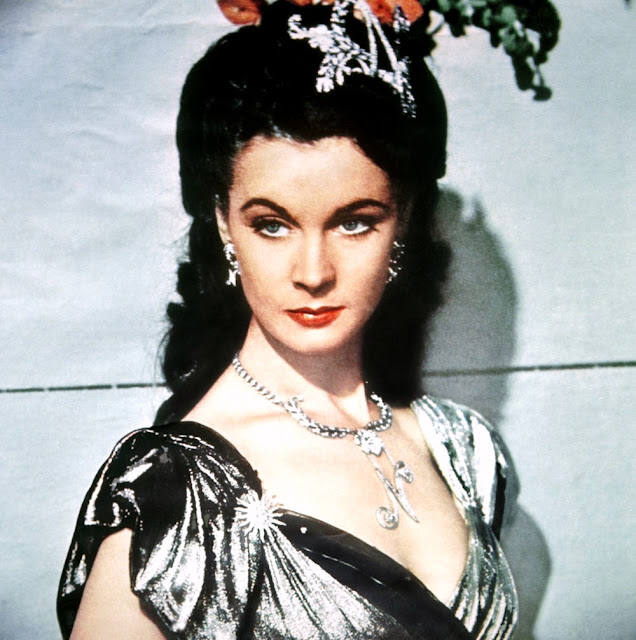 The Now I’ve kissed you through two centuries ball gown was auctioned off a few years ago by Christie’s, selling for $7,800 USD.  From Christie’s website: A full-length formal gown of black velvet, the v-shaped neckline trimmed with black lace, the bodice and skirt embellished with rhinestones and bugle beads in the form of feathers and bows. The dress was subsequently adapted for later use. 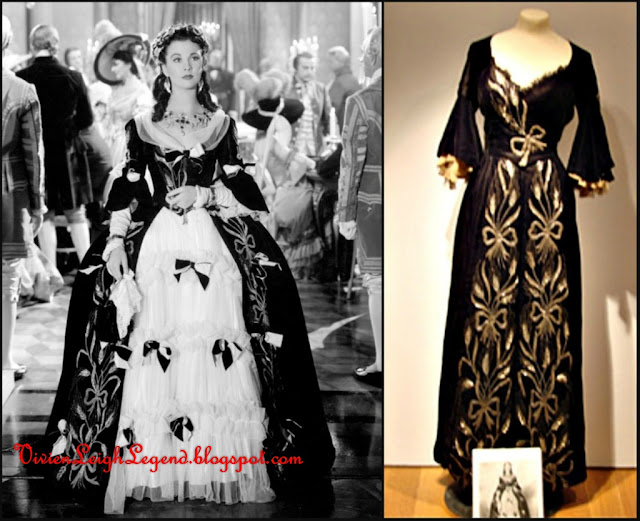 Eugne Joseff was the jewelry designer for That Hamilton Woman. In the movie, Vivien wears this gorgeous, faux diamond and emerald necklace. The necklace was originally created by Joseff for Greta Garbo to wear in the 1936 movie, Camille. Greta complained that the weight of her cape caused the leaves of the necklace to pierce her skin, so she refused to wear it. Joseff brought the piece out of storage for Vivien to wear as we see in these pictures. 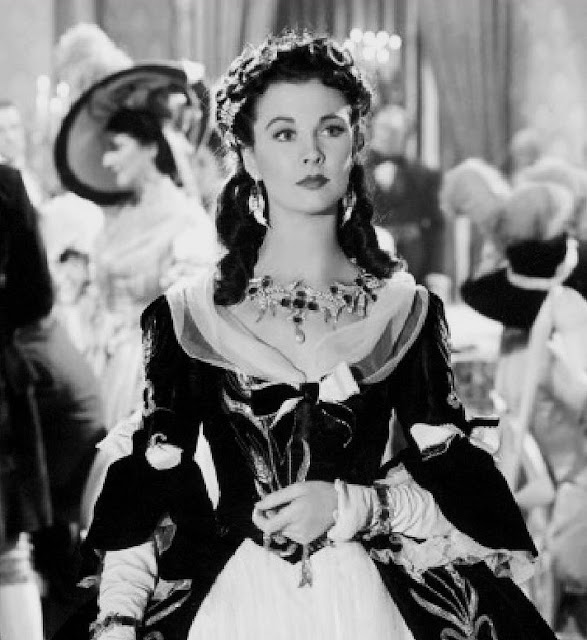 Another of Vivien’s costumes that went on the auction block is this gorgeous overcoat. The outfit was sold at Sotheby’s in 2002 for around $8,000 USD. Looking at the black and white photos, one would never guess that the coat was a gorgeous green color. 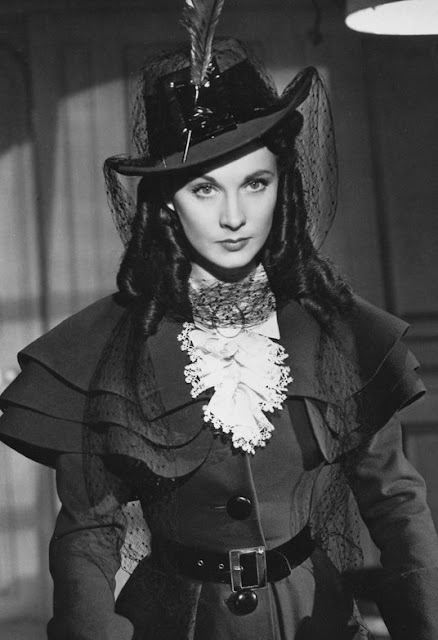 The top of the coat features a multi-tiered capelet, while the sleeves end in oversized cuffs. The extra large, black buttons run almost the entire length of the overcoat. A black belt is cinched into place around the close fitting waist. In the picture above, a frilly cravat stands its ground, held in place with a large cameo brooch. 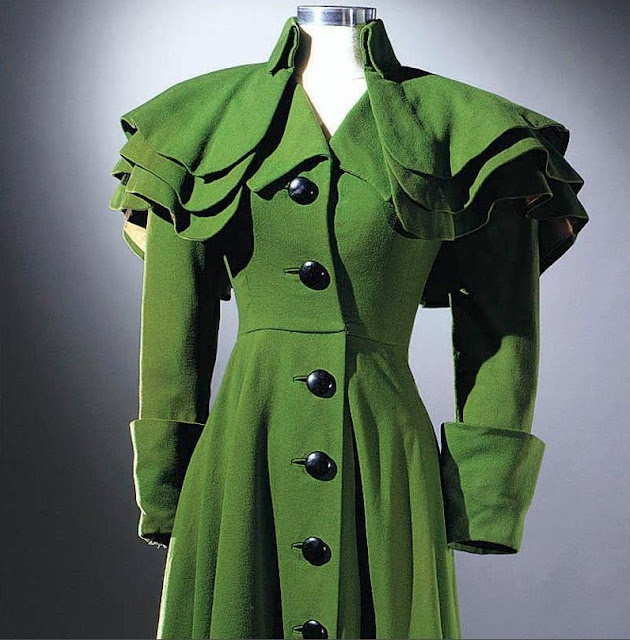 One part of the publicity campaign for That Hamilton Woman! were costume reproductions. These modern day replicas were available to the general public at fine department stores. 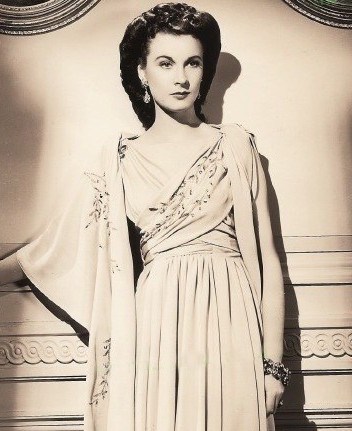 One of my personal favorites, from That Hamilton Woman!, is this gorgeous gown. I don’t have a description of the dress as viewed in the movie, but I do have a description of the replica made for the public. The replica gown was made from white crepe. The crepe drapes over the bodice Grecian style and the shoulders feature toga like knots. The bodice and the detachable shawl feature an embroidered design, embellished with diamantes. 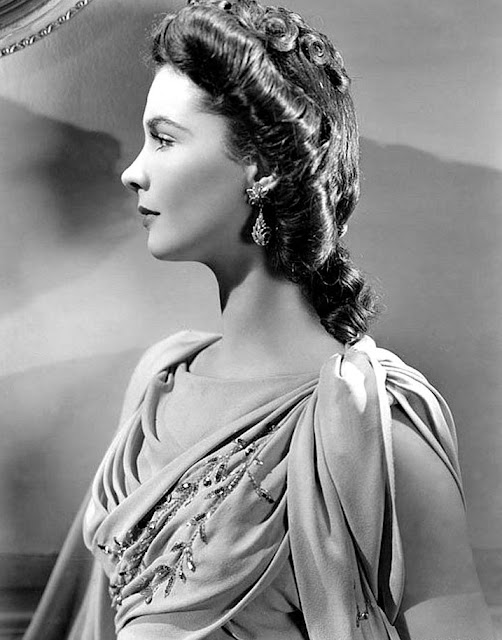 And finally, we come to a costume worn by Laurence Olivier as Horatio Nelson. This costume went on the auction block in 2011, selling for $19,000! 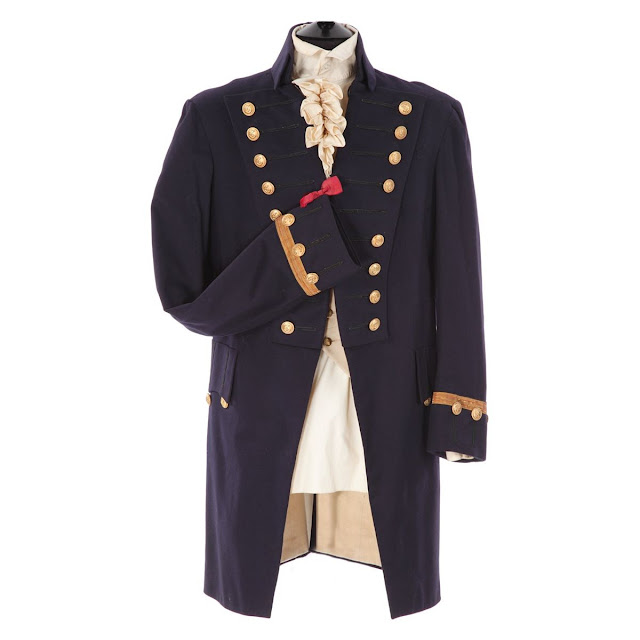 As Nelson, Olivier wears several different naval uniforms. This particular one can be seen, in the movie, when Vivien comes aboard Nelson’s ship. It’s a long, navy colored jacket with a cream vest and white shirt beneath. The white shirt features ruffles in the front and at the wrists. The jacket, as pictured above, is missing its gold epaulettes from the shoulders. 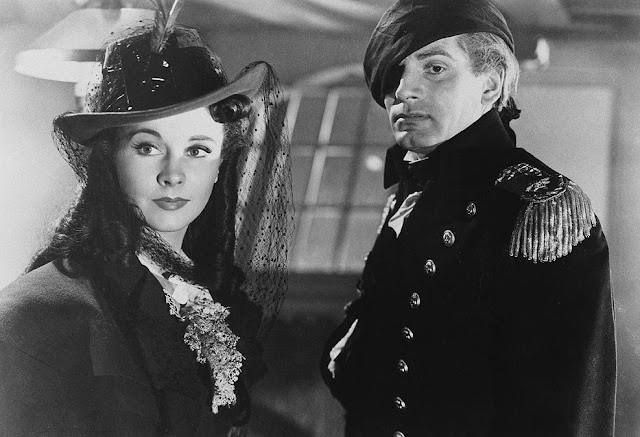 This last picture shows the real Nelson’s naval uniform. Nelson wore it in the Battle of Trafalgar, where unfortunately, he was killed by gunfire. The gentleman in the picture is pointing to the bullet hole in Nelson’s jacket. 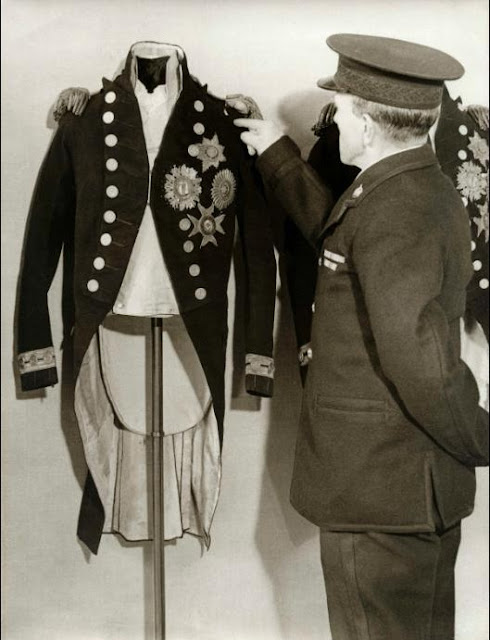 From Napoleon.org: Nelson had lost his right arm at Santa Cruz de Tenerife on 22 July 1797, and accordingly the right sleeve of the jacket is only lined to the elbow, and is equipped with a small loop that allows it to be crossed over the breast and fastened to a button. On the left sleeve and tails there are visible bloodstains, probably those of John Scott, Nelson’s secretary, who was killed just before him. The uniform and a number of other effects were given to Lady Hamilton, who gave them away to settle a debt in 1814. Prince Albert acquired them later for 150 pounds and donated them to Greenwich Hospital. As for the bullet that killed Nelson, it is now kept in the Royal Collection at Windsor.

21 Cool Things About "That Hamilton Woman!"