In 1949, Vivien Leigh decided to tackle the role of Blanche Du Bois in Tennessee Williams’ play, A Streetcar Named Desire. Her director and producer was also her husband, Laurence Olivier. The couple put up £10,000 to produce the play.

During rehearsals, Vivien began the habit of wearing the same outfit daily. Her chosen attire was by designer Hardy Amies, whom she’d known since the 1930s. 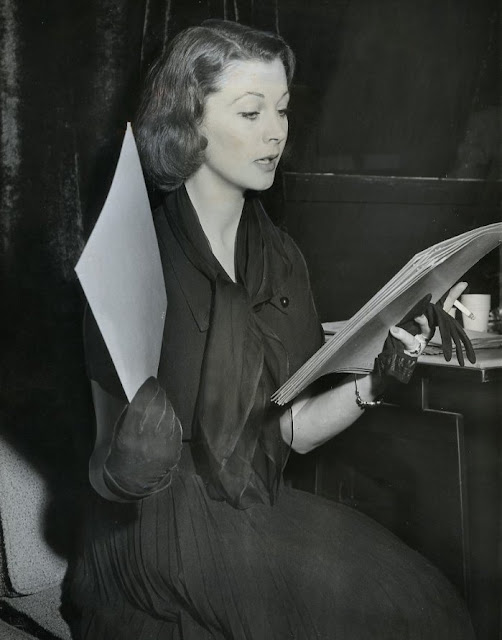 This rehearsal outfit was made from a black, light-weight wool, which Vivien said she practically lives in. The slightly flared, pleated skirt hit Vivien below the knee. Sometimes, she changed things up by switching out the blouses– from short sleeves to long sleeves and vice versa. One standout feature of the blouses were their Quaker girl collars.

Amies wasn’t a fan of the padded shoulder look and worked hard to bring a more natural looking shoulder to women’s clothing. What I didn’t realize was that the moment skirts were lowered, we could soften shoulders. I say that the battle of the shoulders was won at the hemline. -Hardy Amies 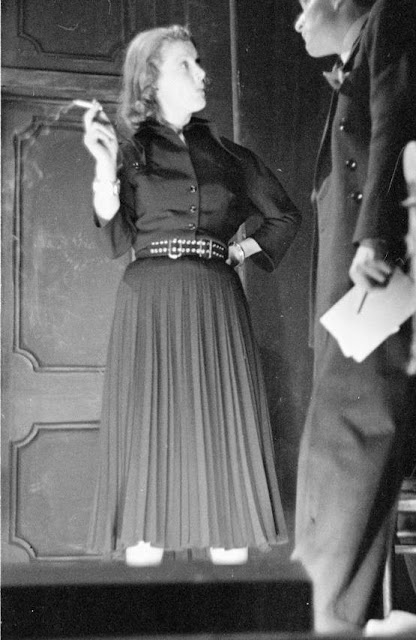 Another way Vivien changed up her daily look was to add a scarf to her blouse. She had several different colored ones that she’d slide beneath the collar of her dress and tie in the front. 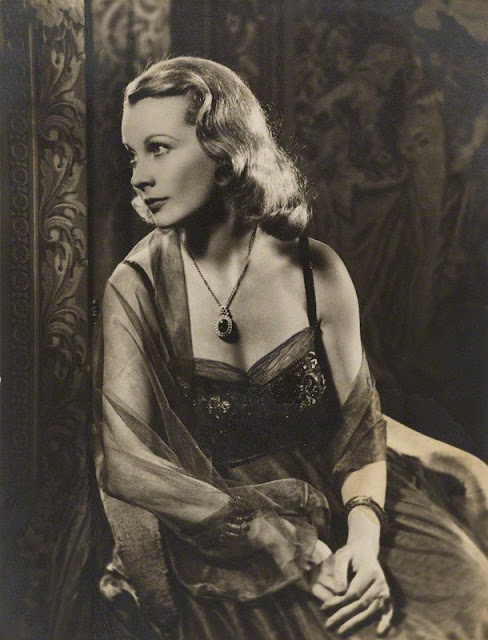 Vivien did several publicity portraits for the promotion of A Streetcar Named Desire. Here she poses for the camera in the same outfit twice: one picture shows her with her dark hair dyed blonde, for the role of Blanche; and in the other picture, she’s wearing one of her dark wigs. 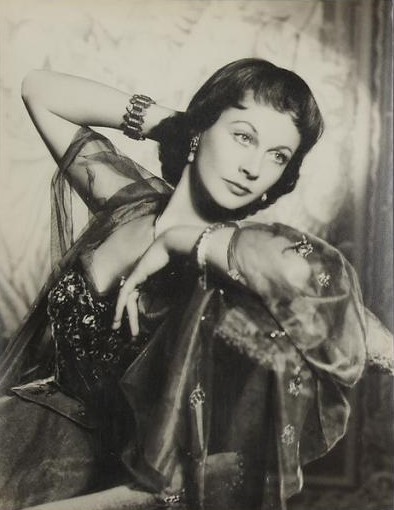 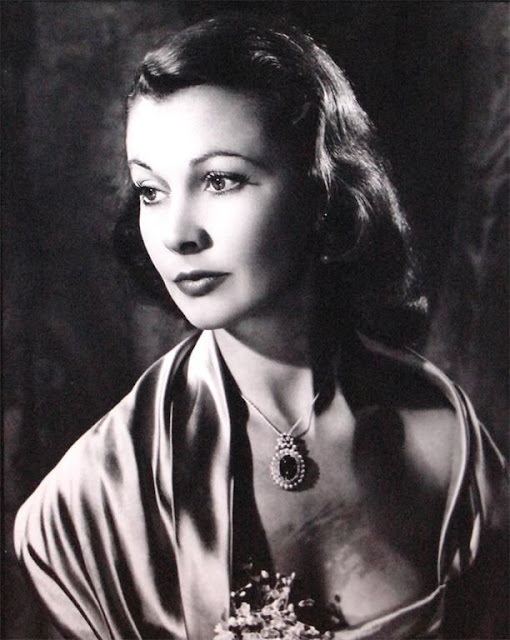 Once again, Vivien posed in the same evening gown, with and without her wig. Honestly, I really prefer her natural hair to any of her wigs.

The designer is Molyneux, who created this gown especially for Vivien. The dress is made from a light-green satin. It features a closely fitted bodice and a fully gathered skirt. The gown’s wide straps wrap around Vivien’s shoulders, creating a shawl-like effect. Lily of the valley is attached to the bodice. 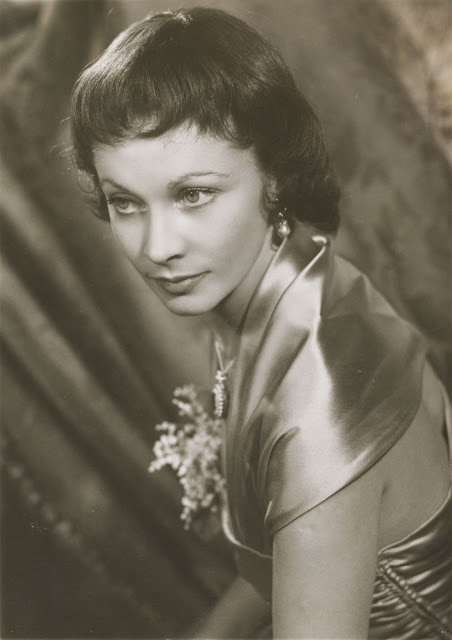 Here’s a sketch of her wearing this Molyneux gown. Unfortunately, I haven’t yet been able to find a full-length picture of Vivien in this gown. 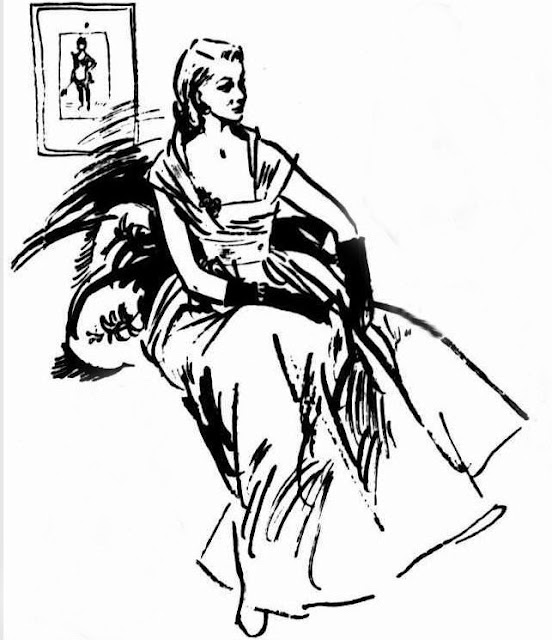 The last bit of fashion for today’s post is this adorable cap! The wool hat was created by Valentina, a
fashion and costume designer working in New York City. 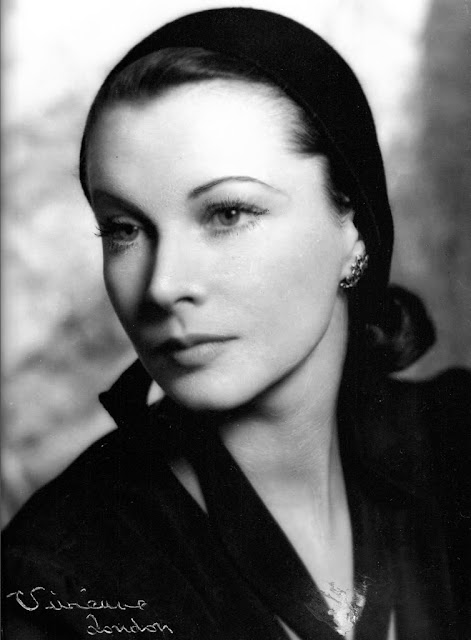 Vivien loved this little cap so much that she bought it in several different colors. It features two long straps for tying either in the back, under the hair or in the front, under the chin. She wore these hats quite a bit as she laughingly commented to a reporter:  My friends are sick of the sight of me in it! 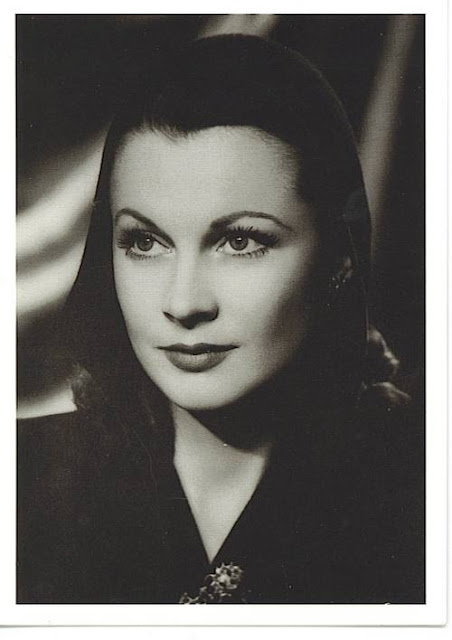