In December, 1939, Atlanta fell under the spell of David Selznick’s masterpiece, Gone With the Wind. The mayor of Atlanta, William Hartsfield, declared a three day holiday to celebrate the movie’s premiere at Loew’s Grand Theater on Peachtree Street. Three of the main cast members flew in from Hollywood, which included Vivien Leigh, Clark Gable and Olivia de Havilland. Other celebrities attending the premiere included David Selznick, along with his wife Irene Selznick, Laurence Olivier, Carole Lombard and Claudette Colbert.

On Thursday, December 14th, Vivien and other cast members attended the Junior League Ball. Vivien’s dress for this event was specifically designed for her by Walter Plunkett, the costume designer for Gone With the Wind. 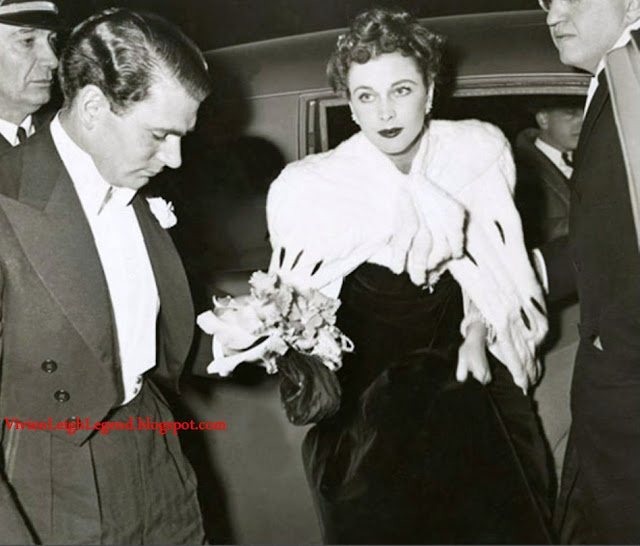 Vivien’s black evening gown was made from lyons velvet, a stiff and thick velvet fabric fashionable at the time of the premiere. The dress featured a fitted bodice, trimmed in white ermine, and sleeves capped off by ermine and ermine tails. From Vivien’s waist, the dress flared out into a wide, full skirt. Willard George designed her cape, made from ermine and their black tails. Paul Flato designed Vivien’s jewelry for the evening, which featured a diamond butterfly clip for her hair, a diamond & ruby bracelet and a diamond bow ring. 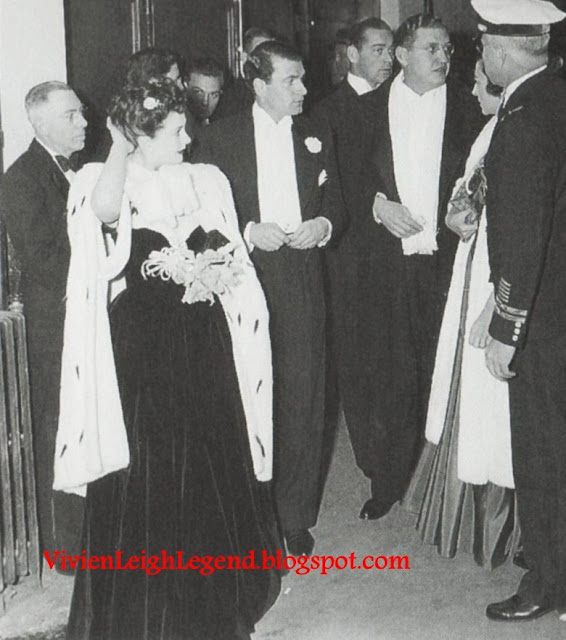 Below is a formal, publicity photo of Vivien in her Junior League Ball gown, which really showcases the skirt. 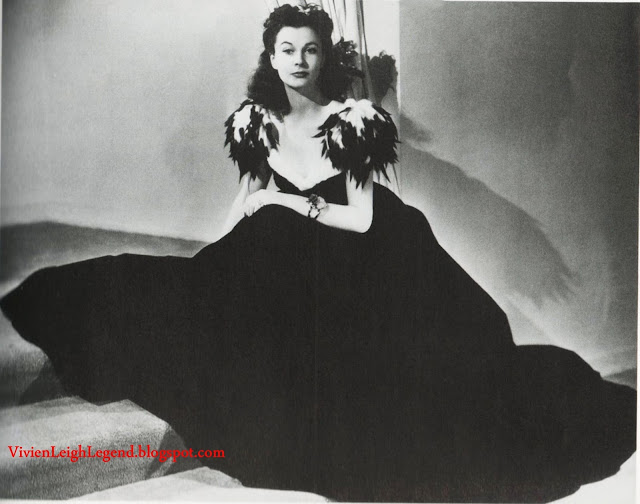 Also in attendance at the Junior League Ball was Laura Hope Crews, better known as Aunt Pittypat, and Ona Munson, the film’s Belle Watling. The two ladies came dressed as their characters from Gone With the Wind. 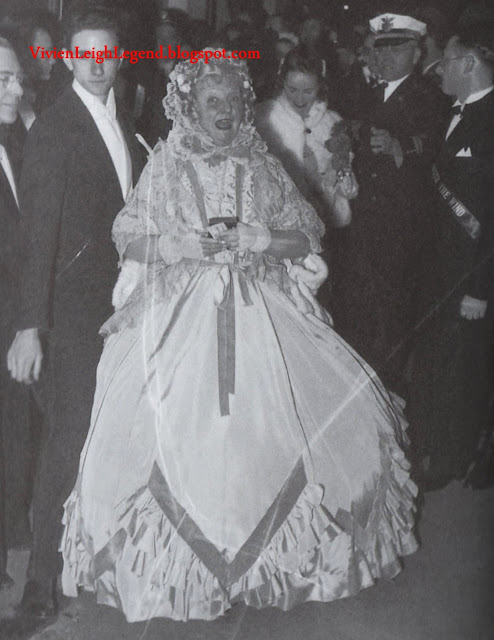 Ona Munson also wore her Belle Watling red wig, which complemented her outfit made from cerise taffeta …[with] silken folds under the skirt. Her four petticoats were embroidered eyelet, hooped and plain. She wore pantalets and a bustle. Her accessories were roses, gold bells, a purple net scarf and a pair of bell earrings. Bell earrings for Belle! 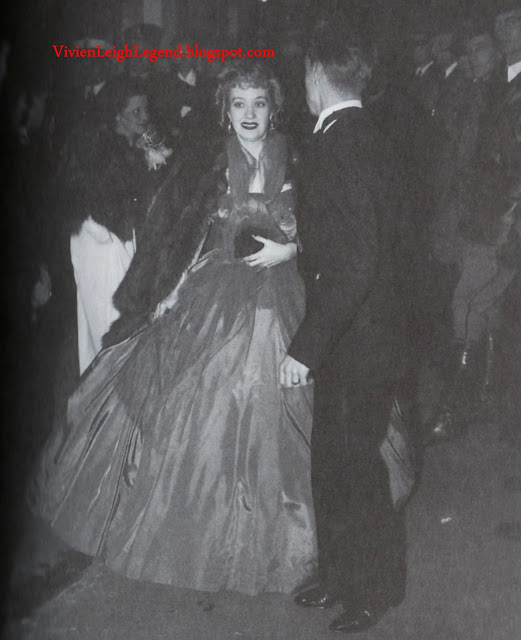 Clark Gable and Carole Lombard also attended the Junior League ball. Unfortunately, I wasn’t able to find a description of Carole’s outfit. They are pictured with Atlanta Mayor William Hartsfield and his daughter, Mildred, who was lucky enough to sit next to Gable for the evening’s festivities. Mildred’s dress was heavy yellow moire taffeta striped with gray, featuring a square neck and long sleeves. Both the neck and sleeves were trimmed with old cream lace. The dress had a tiny waist and full skirt worn over crinoline petticoats. She wore an old gold necklace with pendants and gold drop earrings. In  her hair she wore yellow ribbon bows and on her shoulder she wore yellow orchids with red throats. Black lace mittens, black velvet bag and cape completed her costume. Wow, she’s got a lot going on! 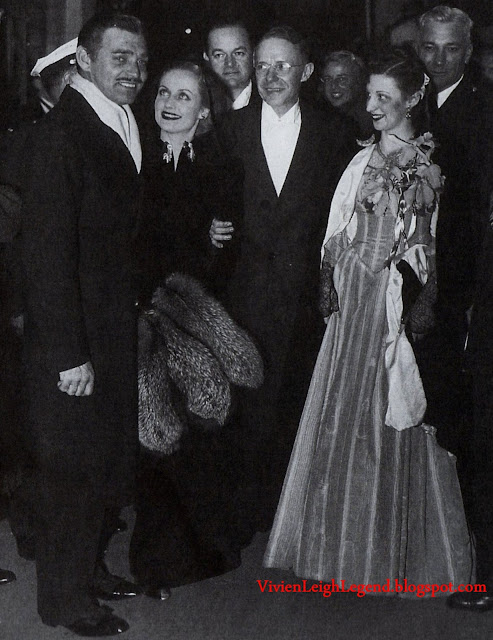 The next evening, December 15th, saw the premiere of Gone With the Wind. Once again, Vivien chose to wear a Walter Plunkett gown. This lamé gown was a brilliant gold, perfectly setting off Vivien’s dark brown hair with its hints of reddishness. As with her Junior League gown, publicity portraits were taken of Vivien in her gold dress. 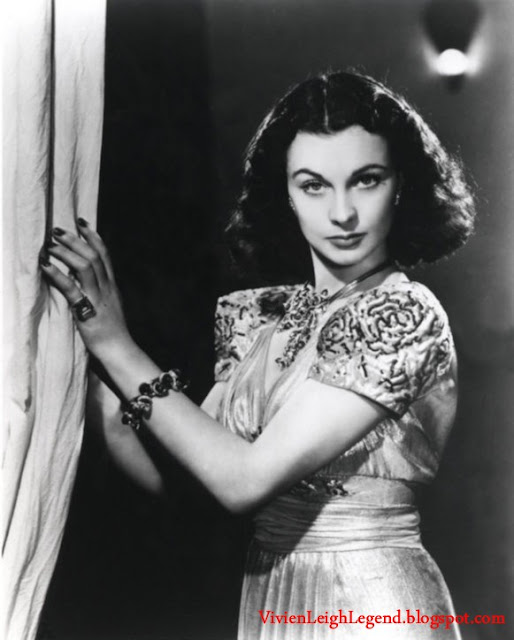 The gown is of gold lame, draped in Oriental fashion, with harem hem line and draped girdle accenting the small waist. Girdle and the short sleeves are quilted in rose pattern and studded with gold sequins. Vivien’s jewelry featured an acorn and leaf design, fashioned from topaz and diamonds. The matching necklace and bracelet resided quite nicely in its gold setting as did the princess cut topaz ring on her pinkie. 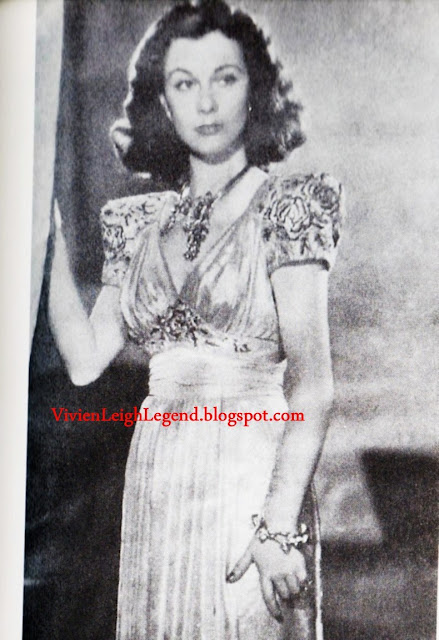 Vivien’s unofficial date for the evening was the sharply dressed Laurence Olivier, recent star of “Wuthering Heights.” Olivier’s tuxedo was made from a dark coloured wool, with stripes only a shade lighter than the suit. The top coat featured tails, pointed lapels and a left breast pocket. The matching pants came with a five button fly.  His tux was specially created for him by Roche and Pollock in September, 1939. 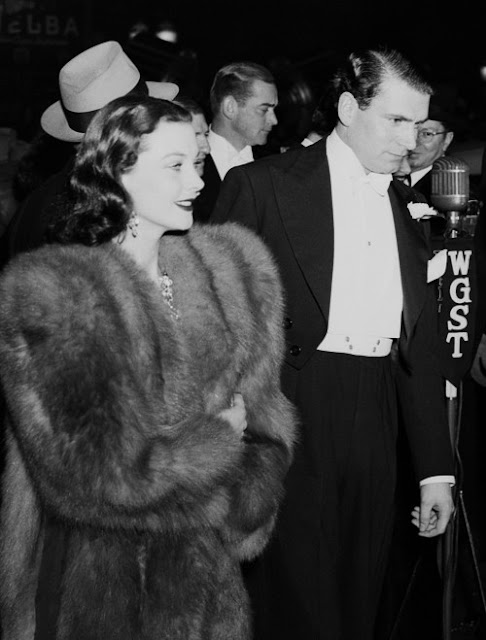 Also, in attendance at the premiere, was author Margaret Mitchell. She wore a fashionable pink full skirted tulle gown, a full length white velvet evening coat, a pink bow in her hair, and a camellia corsage given to her by the producers. (Atlanta History Center) Below is a photo of Mitchell’s full length coat, along with a picture of her wearing the coat while speaking to the crowds. One can get a slight glimpse of her long skirt as the pink tulle dress plays peek-a-boo with her evening coat. 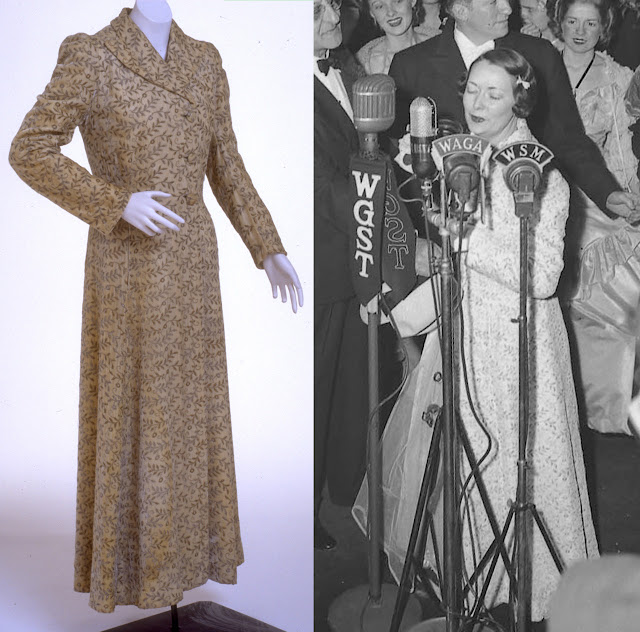 Mitchell’s dress featured a fitted bodice, with off the shoulder sleeves. She’s pictured seated, in between Jock Whitney (financial backer of GWTW) and her husband, John Marsh (wearing the glasses). 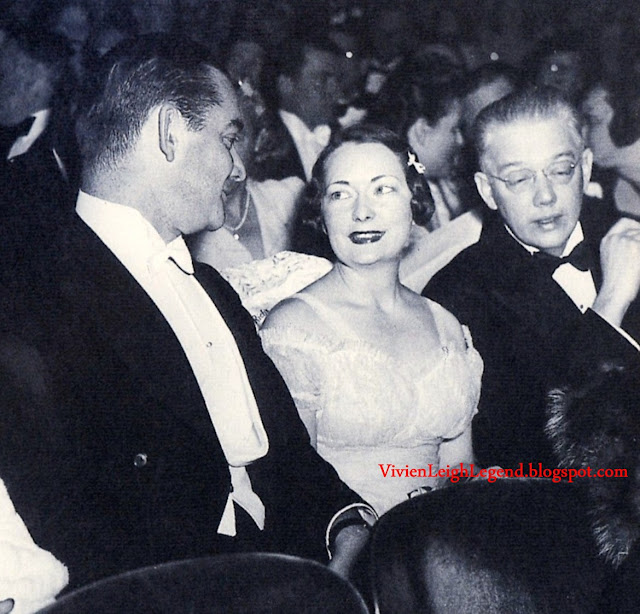 Carole Lombard, aka Mrs. Clark Gable, also attended the premiere, on the arm of her man. She wore a medieval cape of blush satin with a train, [which matched her gown]. Blush is in the pink-color family. I love Carole’s netted hood. It must’ve been quite striking against her blonde hair. 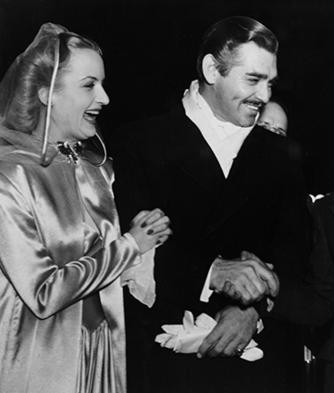 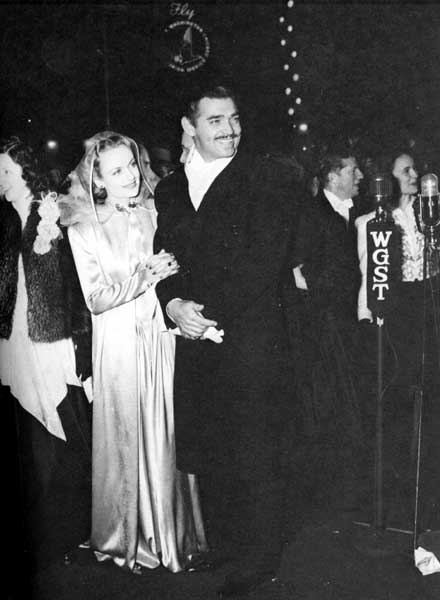 Here’s Ona Munson as she arrives at the premiere and poses for photographers. Ona’s wearing a dark, green velvet, evening gown with a fur jacket and corsage. 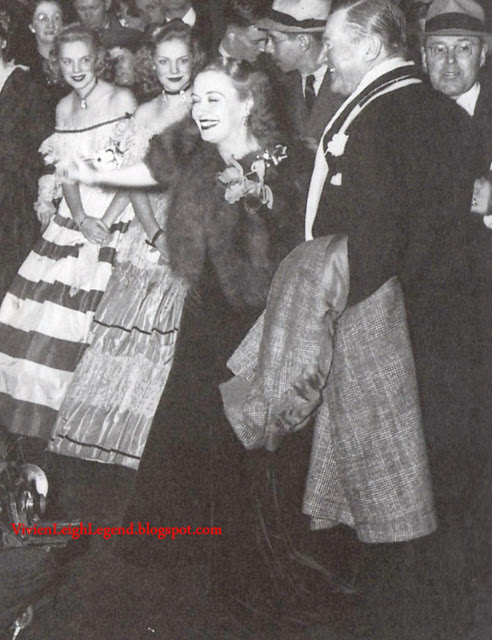 The two ladies, in antebellum costumes, next to Ona are twin sisters, Virginia and Charlotte Starr. They were two of the thirty girls selected to act as hostesses for Gone With the Wind‘s premiere. 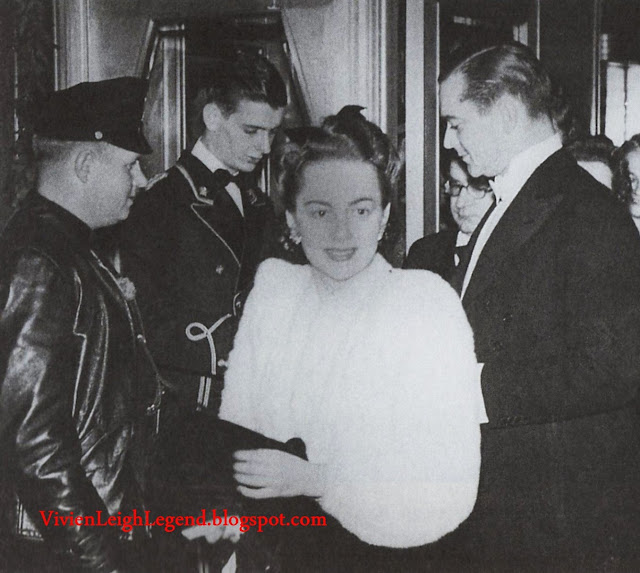 Finally, here’s Olivia de Havilland, arriving at the theater with Jock Whitney, whom she also sat next to throughout the show. Olivia wore a black velvet evening gown with an ermine fur jacket. Unfortunately, I wasn’t able to find a full length photo of Olivia in her evening gown. 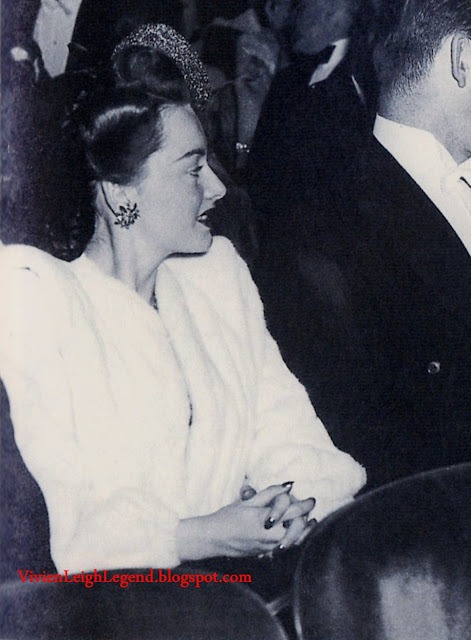 Unless otherwise noted, all italicized dress descriptions are from Herb Bridges.

Fashion Friday #6: The Woman In Fashion

The Loves of Clark Gable