In 1938, Vivien Leigh co-starred in A Yank At Oxford with Robert Taylor and Maureen O’Sullivan. Vivien, as the second female lead, played the very flirtatious wife of the local (and older than her) book-seller at Oxford.

As Elsa Craddock, Vivien stirs things up for the local collegians, which includes Robert Taylor’s character, Lee Sheridan. Lee is a brash, cocky, young American who triumphs sportswise over the other young men at Oxford. Maureen O’Sullivan plays Molly Beaumont, Robert Taylor’s love interest and sister of his athletic rival. 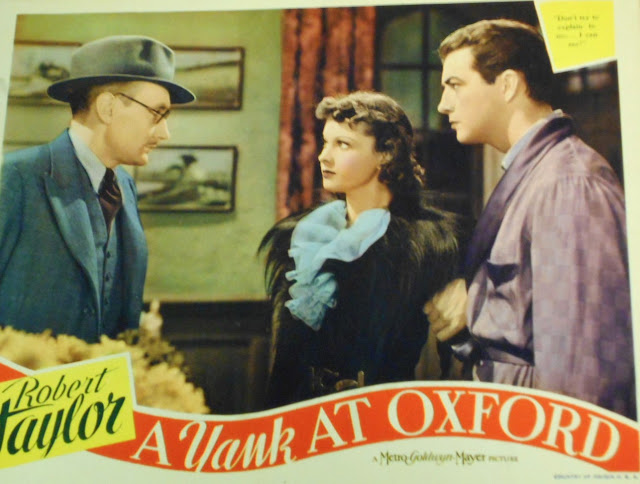 The clothes for A Yank At Oxford were created by Swiss designer, Rene Hubert. Ultimately, Rene would work as costume designer on four of Vivien’s movies, Fire Over England, Dark Journey, Yank and That Hamilton Woman.

Hubert designed costumes for well over a hundred movies during his long career and received two Oscar nominations for his work. His first nomination was in 1954 for Desiree (color) and his second came ten years later in 1964 for The Visit (black & white). In addition to movies, Mr. Hubert also designed stage sets and costumes for plays and revues. 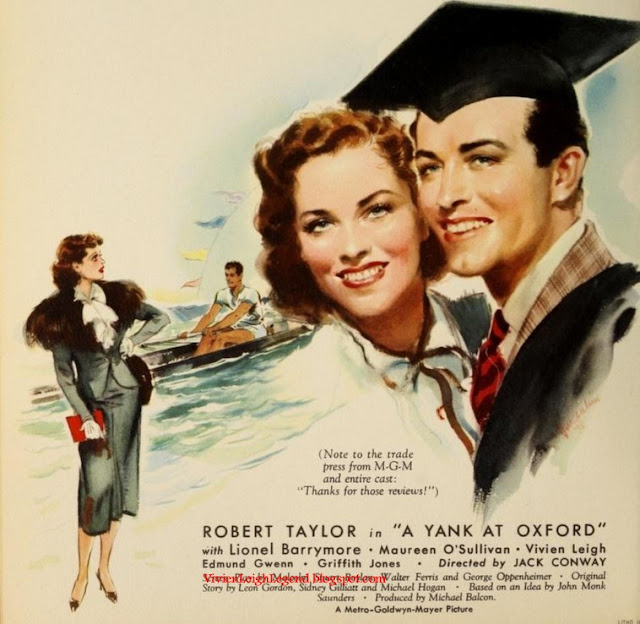 The first outfit we’ll look at today is this lovely three-piece, plaid ensemble. The jacket is made from black tweed, while the lapels and pockets are trimmed in a black and yellow plaid design. The skirt is also made from tweed, with the same plaid pattern as the jacket’s trimmings, in black and yellow. Even the gloves didn’t escape Rene’s attention with their plaid undersides. 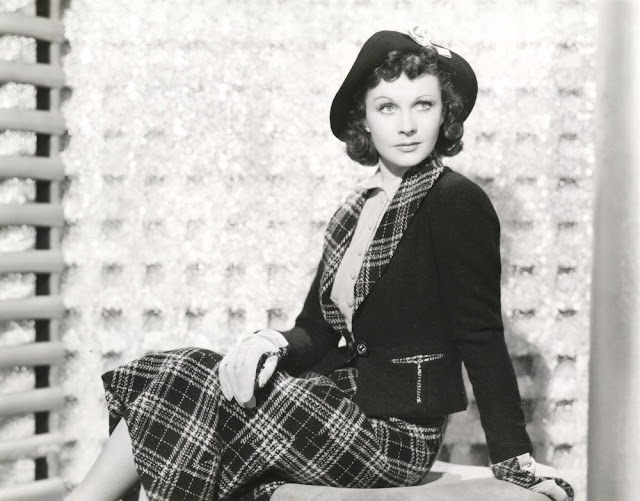 One of the perks of playing ‘the other woman,’ in a movie from the 1930s, is that the actress usually gets to wear flashier clothes than the film’s good girl. We can see that’s the case with Vivien’s character, Elsa, in her fur-trimmed ensemble, pictured below. 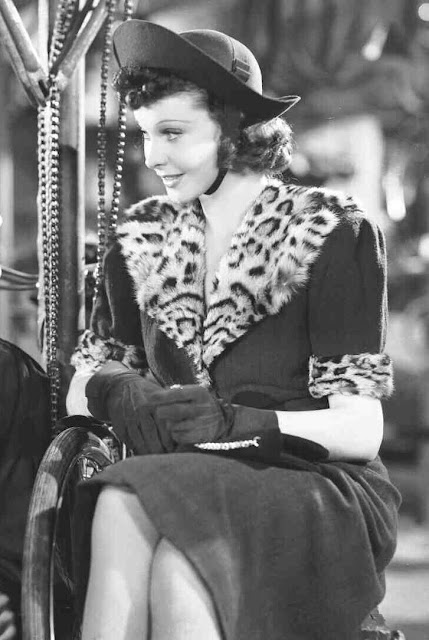 Vivien wears a smart, green, wool outfit that coordinates perfectly with her gloves and chin-strapped hat . The dress features ocelot fur-covered lapels and cuffs at the sleeves’ ends. The fur travels from the lapels up to the shoulders, then down the dress’ backside to the waist (pictured below). One magazine referred to this as a cape effect. (Side note: Seriously, ocelots are so cute that I can’t even believe anyone would use them for their fur. Even though they’re part of the leopard family, they’re only slightly bigger than domesticated house cats.) 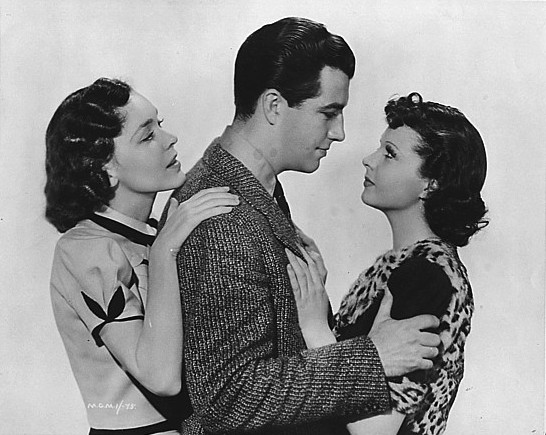 Next up is this lovely cream coat, made from twilled fabric. The coat is stitched in dark brown silk and fastened with three wood grained buttons in the same shade. The coat is worn over an underdress of brown crepe de chine, tied at the neck with a bow. Bags, gloves and shoes are in the same shade of brown, the suede shoes trimmed with corded silk. The hat is cream felt to match the coat with dark brown stitching for trimming (description is from the San Bernardino County Paper). Crepe de Chine is a light material, usually made from silk. 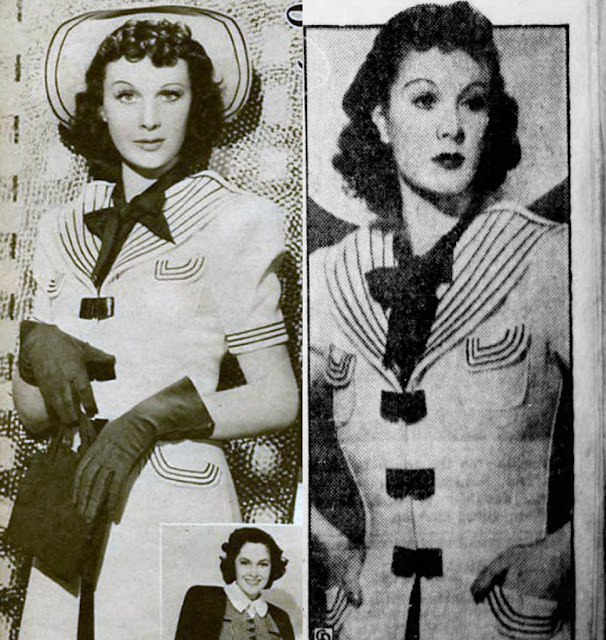 Maureen O’Sullivan played the main female lead in A Yank At Oxford. Rene Hubert created fourteen costumes for her to wear in the movie.

From the MGM publicity department: Here is Maureen in a neat, practical ensemble for the young undergraduette about Oxford. Skirt and coatee are in fine brown wool, with an attractive masculine feature in the brown check tweed waistcoat; imitation pockets are piped in brown wool and buttons are covered in brown wool. Shirt, collar, tie and cuffs are in an off-white pique, with shoes in brown suede. 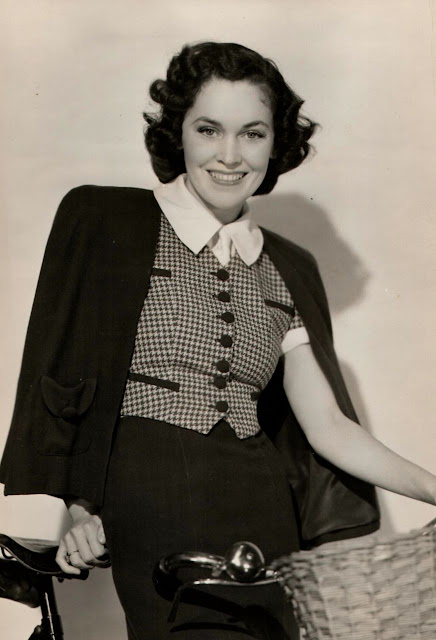 Below, Maureen wears a two-piece outfit designed for her character, Molly, when she’s off campus. The fitted, slender skirt features three inch slits on each side and is made from medium blue, wool cloque. Cloque is a woven material with a textured or quilted look, which came into popularity in the late 1930s.

The form-fitting jacket zips up in the front and is also made from wool cloque, with front and back panels of dark blue velvet. The jacket’s pockets are trimmed in a medium blue, while the collar, tie and zipper covering are of pale blue pique. 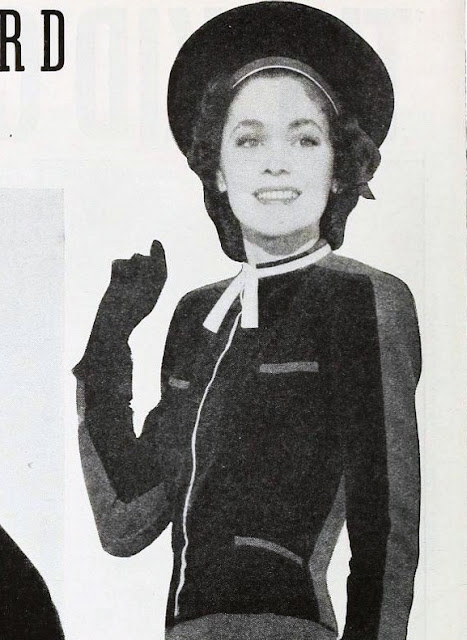 I don’t have any close-up pictures of Vivien and Maureen’s shoes as they all come out too blurry when I enlarge them. I do have these two vintage ads for shoes from 1938, which I absolutely love since they’re in color. 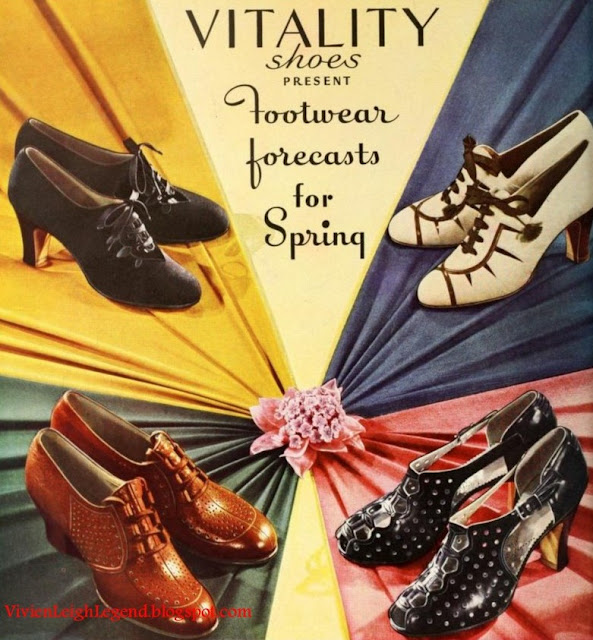 The shoes in the bottom right, with the eight open-holes, are similar to a pair that Vivien wears in the movie, minus the buckle straps. Other shoes from the movie feature ties and bows. If any of today’s shoemakers were to produce a vintage line of shoes like these from 1938, I’d be first in line for them. 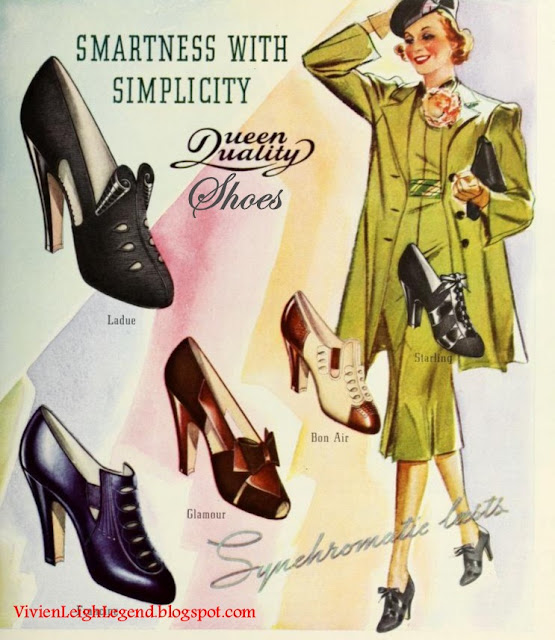 Thanks for joining me for today’s Fashion Friday post!
~Michelle

Fashion Friday #6: The Woman In Fashion