To mark William Shakespeare’s 400th birthday in 1964, Vivien Leigh and her good friend, Robert Helpmann, attended an outdoor celebration for the Bard. The party took place on an overcast day at the partially finished Yvonne Arnaud Theatre in Guildford. 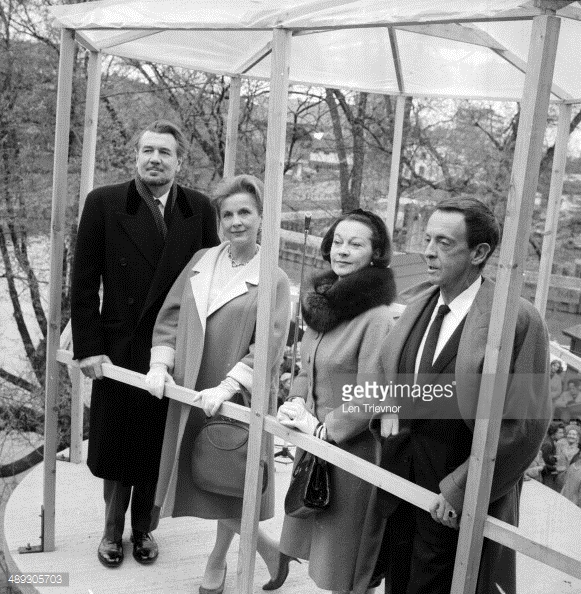 In addition to Robert Helpmann, Vivien was joined by Michael Redgrave (who would star in the theater’s opening play,  A Month In The Country with Ingrid Bergman, in 1965) and Diana Wynyard, (who sadly passed away from kidney failure three weeks after this picture was taken).

For this special occasion, Vivien chose to wear a hot pink, two piece outfit. The boxy shaped jacket featured five buttons down the front, pocket flaps and side buttons. Vivien accented her outfit with a fur stole around her neck, gloves and a black velvet hair band a la Alice In Wonderland.

For their part of the celebration, Vivien and Helpmann recreated one of their scenes from A Midsummer Night’s Dream, titled Ill Met by Moonlight.  The two had co-starred in the play twenty-six years earlier in late 1937 to early 1938, as Titania and Oberon, respectively.

Here’s part of that scene:
Oberon: Ill met by moonlight, proud Titania.
Titania: What, jealous Oberon! Fairies, skip hence:
I have forsworn his bed and company.
Oberon: Tarry, rash wanton: am not I thy lord?
Titania: Then I must be thy lady: but I know
When thou hast stolen away from fairy land,
And in the shape of Corin sat all day,
Playing on pipes of corn and versing love
To amorous Phillida.

Then Vivien recited the Quality of Mercy speech by Portia from The Merchant of Venice. Since the theater wasn’t completed yet, they stood on a platform built into the scaffolding.

The quality of mercy is not strained;
It droppeth as the gentle rain from heaven
Upon the place beneath. It is twice blest;
It blesseth him that gives and him that takes:
‘T is mightiest in the mightiest; it becomes
The throned monarch better than his crown:
His sceptre shows the force of temporal power,
The attribute to awe and majesty,
Wherein doth sit the dread and fear of kings;
But mercy is above this sceptred sway;
It is enthronèd in the hearts of kings,
It is an attribute to God himself;
And earthly power doth then show likest God’s
When mercy seasons justice. Therefore, Jew,
Though justice be thy plea, consider this,
That, in the course of justice, none of us
Should see salvation: we do pray for mercy;
And that same prayer doth teach us all to render
The deeds of mercy. I have spoke thus much
To mitigate the justice of thy plea;
Which if thou follow, this strict court of Venice
Must needs give sentence ‘gainst the merchant there.

This next picture of Vivien was taken at another event. She’s wearing the same outfit, but this time we get to see her ensemble in color. Note how vibrant the pink would have been in person. 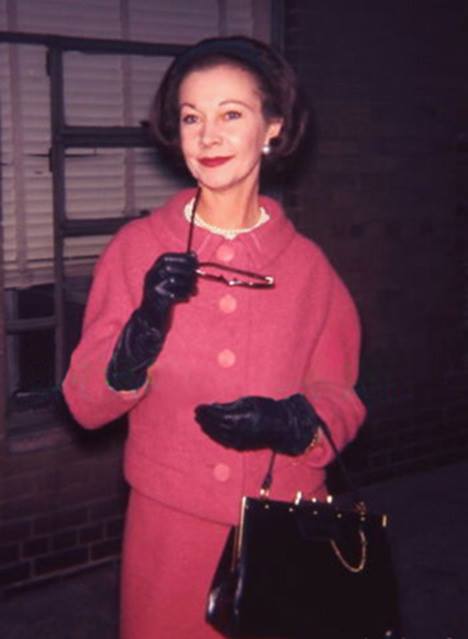 A side view of Vivien, at the theater, with Helpmann looking on: 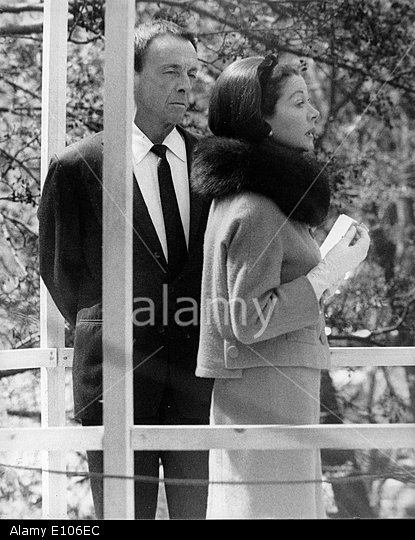 Members of the audience included several swans, from the River Wey, who came ashore to enjoy the tribute to Shakespeare 🙂

Thanks for joining me for this Fashion Friday post!

Fashion Friday #3, On the Golf Course

Fashion Friday #5: A Yank At Oxford