In 1961, Vivien Leigh embarked on a world tour, leading the Old Vic Company in three different plays with stops across three continents: Australia, South America and North America. One of the plays performed was The Lady of the Camellias.

In The Lady of the Camellias, Vivien plays a nineteenth-century courtesan named Marguerite Gauthier. The play was based on the book La Dame aux Camélias, by Alexandre Dumas fils (the son of Alexandre Dumas, writer of novels such as The Three Musketeers, The Man in the Iron Mask). The character of Marguerite was based on Marie Duplessis, a real life courtesan that Dumas knew and loved. Sadly, Marie died of consumption (tuberculosis) at the young age of 23.

Over the years, La Dame aux Camélias has been adapted for the stage, ballet and film. The story also inspired Verdi’s opera, La traviata. It’s most famous film rendition is Greta Garbo’s Camille, made in 1936 and co-starring Robert Taylor.

The costumes and sets for the Old Vic’s production in 1961 were designed by Carl Toms. Mr. Toms really did his research. The time-frame of the play was moved from the 1840s to 1865. This put Vivien back into those hooped skirts she wore as Scarlett O’Hara in that little movie called Gone With the Wind. For The Lady of the Camellias, Vivien wore six different costumes.

The play opens in April, 1865, and in Act I, Vivien makes a stunning entrance on stage in a white opera cloak. One first hand account says that  A gale of admiring gasps always sweeps through the theater as Miss Leigh enters in a floor length cloak of frothy white ostrich feathers over her billowing white ball gown. I think I’d gasp out loud, too!

Beneath her opera cape, Vivien wore a hooped, white ball gown. The gown was adorned with ribbon and white camellias. The white flowers meant that Marguerite was ready to receive her gentlemen callers.

The upper part of the bodice, or corsage as it was called in the 19th century, is trimmed in silk, ending in a tied bow. The bodice also features short, puffed sleeves, while the scooped overskirt is caught up with flowers and bows. All in keeping with ball gowns of the mid-1860s. The bottom of the dress ends in cartridge pleats. 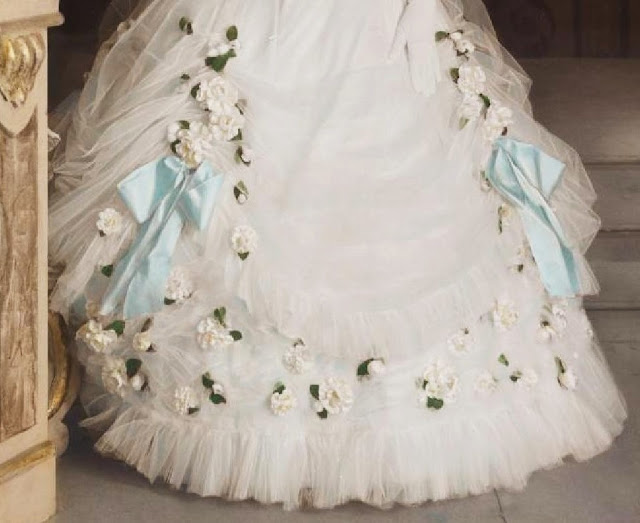 The next costume, from The Lady of the Camellias, is a two piece ensemble with a short jacket. Jackets were actually very common in the 1860s. There were many different styles of ladies’ jackets, which all came with their own names, such as the Pauline, the Senorita, the Zouave, the Eustache, the Robe, the Home jacket and many more. 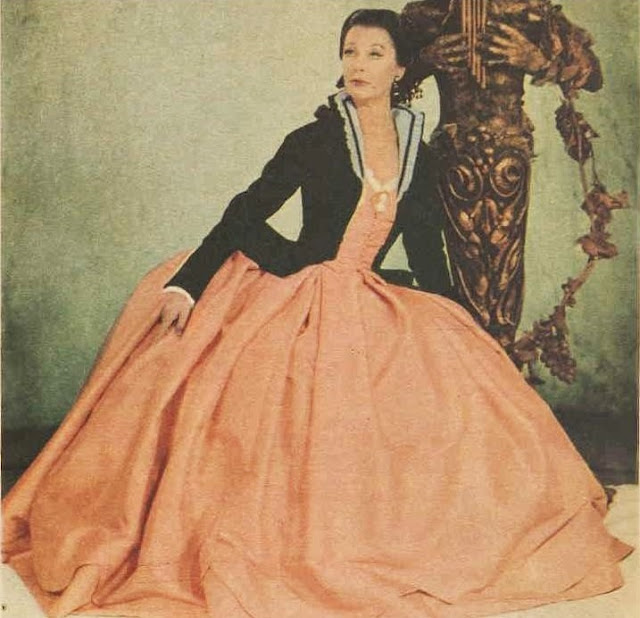 Vivien’s jacket is made from black velvet. The collar and lapels are turned back and trimmed with an ivory gauze featuring what appears to be a fluted ruffle. The same ruffle is also seen on the jacket’s cuffs. The coral coloured, silk vest and jacket are made together as one piece. The second piece of the ensemble is the pleated, hooped skirt, which is also made from the same pink silk as the vest. 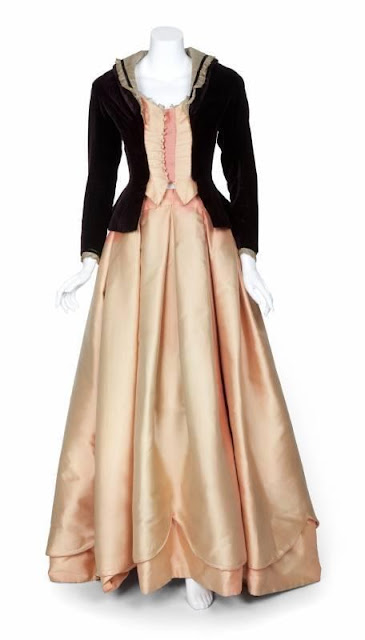 Vivien’s dress as it appeared on the auction block. The dress was actually auctioned off twice. It made its auction debut back on December 17th, 1993, selling for just $459. Then it hit the auction block once more in 2012 as part of the Hollywood Legends sale. This time it sold for $3,200.

Next on the list is this black and white, evening gown. The dress features a low scooped bodice trimmed in a white, fluted ruffle, with an overlay of sheer, black material. The bodice’s white sleeves are short, with pleated, black, sheer layers covering them. The top of the sleeves are caught up with tiny flowers at the shoulder. 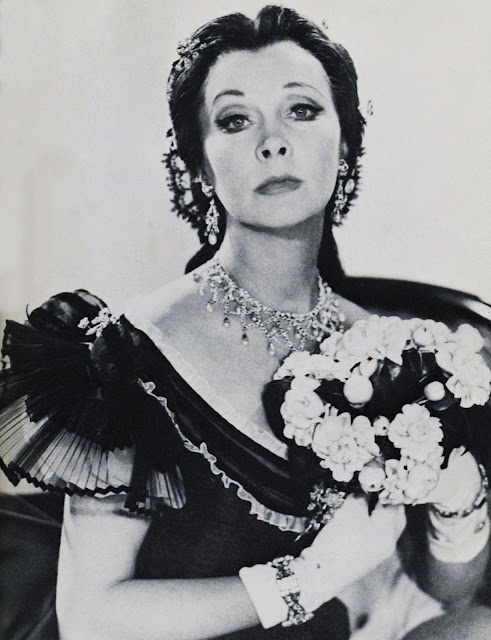 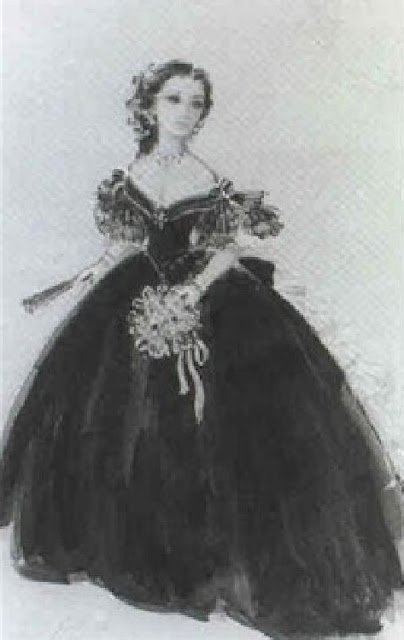 The pictures above and below are drawings of Vivien as Marguerite, by the costume and set designer, Carl Toms. Here we can see the entire dress from the front along with a partial view of the back. Ball gowns in the 1860s were adorned in many ways (lace, ruffles, pleats, flowers, ribbons, bows, etc).  I can’t really tell, from this bottom image, if those are suppose to be white ruffles or pleats, cascading down the backside of the gown. Either way, it’s a stunning effect! 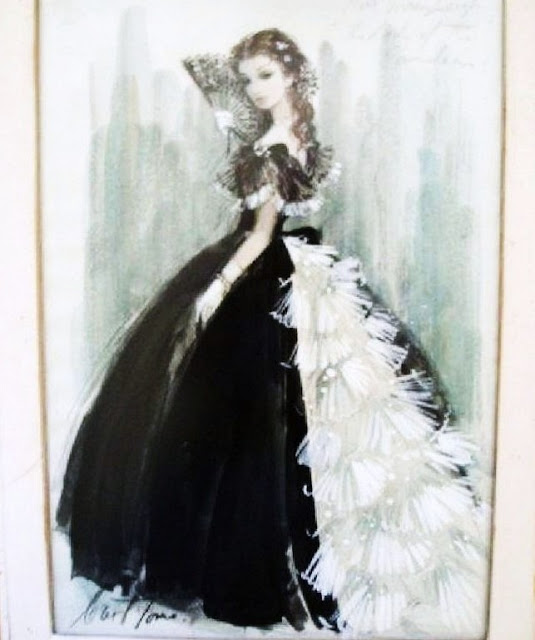 Next, we have another masterful example of Carl Toms’ creative genius for Vivien in the role of Marguerite. He’s imagined Marguerite in a summer dress, also consistent with the time period of the play. 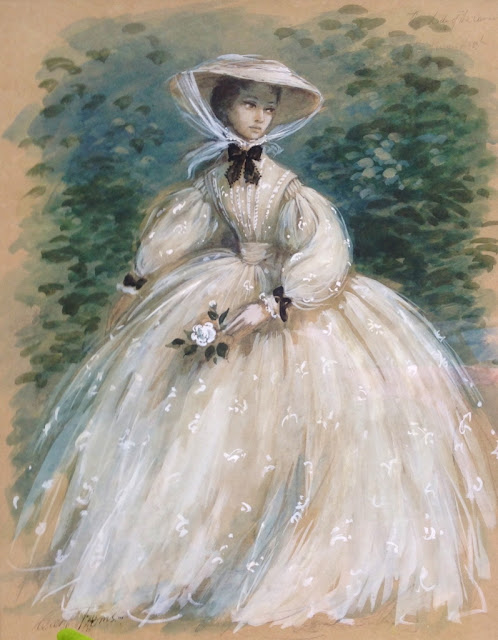 Vivien shines in this lovely gown. Note the difference in color between Carl’s illustration and Vivien’s actual dress. Either the color of the dress was changed to the yellow pictured below or the photo below was colorized.

The gown features long, puffed, bishop sleeves made from a semi-sheer material. The sleeves originate in pleats at the shoulder and end in cravat cuffs at the wrist. At the top of the dress is a cravat (necktie) collar. The collar and cuffs were made to match each other. The gown also features a floral/leaf design, repeated throughout the fabric. The print is more visible in the color photo, than in the black & white ones. Bobby Helpmann, Vivien’s good friend, directed her in The Lady of the Camellias. On Vivien playing the role of Marguerite, he said: It has come just at the right moment in her career. Edwige Feuillère and other French actresses are apt to overstress the grande dame aspect of the character and forget that she was a great courtesan. Miss Leigh blends the two aspects to perfection and has never looked lovelier than in the costumes Carl Toms has designed for her. She is a far greater actress than many people are ready to admit. Once she has made The Lady Of The Camellias her own on this tour, I want to see her play it in the West End, and score what may well turn out to be the most spectacular success of her career. 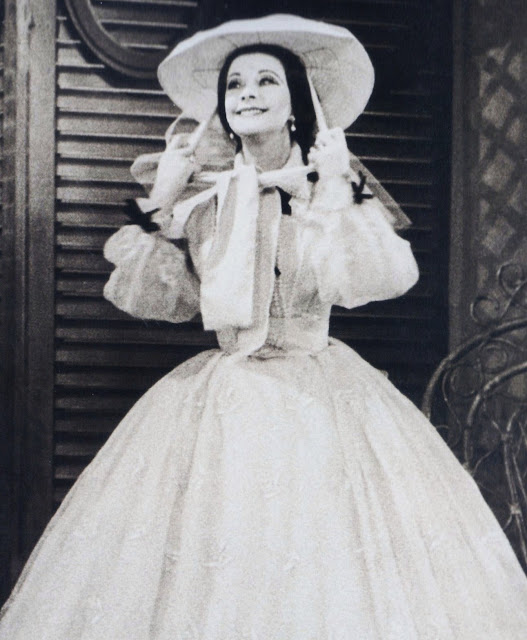 Thanks for joining me for this week’s Fashion Friday post!