Gone With the Wind celebrated its 21st anniversary in March, 1961. The celebrations were held in Atlanta, Georgia, in conjunction with the Civil War Centennial. Newspapers around the world ran headlines such as Scarlett turns 21. The three day event took place from Wednesday, March 8th to Friday, March 10th.

The luminaries began to pour into Atlanta on Wednesday. Olivia de Havilland,  David Selznick, Douglas Fairbanks, Jr, George Murphy and several MGM business associates arrived together on a Gone With the Wind Delta Special flight. Thomas Mitchell, whom we all remember as Scarlett’s Pa, was too ill to attend the festivities. There was a large parade, with Olivia de Havilland in the lead car– an open convertible– that traveled down Peachtree Street.

Vivien didn’t arrive in Atlanta until the following day. After crossing the ocean, her plane landed first at Idlewild Airport (now JFK).  Vivien’s chosen outfit for the day was a two-piece tweed suit. The fawn colored suit featured large buttons and a fur collar. Her hat and shoes matched her suit perfectly in color. She topped her outfit off with a pair of dark sunglasses. 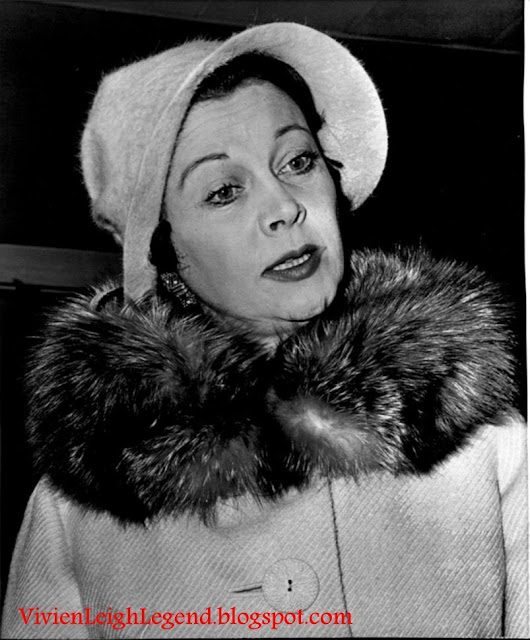 Unfortunately, when Vivien landed in New York, she agreed to a small press conference. The first reporter, who asked her a question, definitely asked her the wrong question. The journalist asked Vivien what part she played in Gone With the Wind.

Her response: Have you seen the picture? Have you read the book? When the fellow confessed that he had not done either, Vivien replied, Since you are not informed, gentlemen, there is no sense in continuing. But the reporter asked another question, Do you mind telling me what film you are going to do next?

The Roman Spring of Mrs. Stone and I’m not playing the Roman spring! Then she swept from the room in true Scarlett O’Hara style. According to Dorothy Kilgallen, her response was far saltier than what she was actually quoted in the papers. 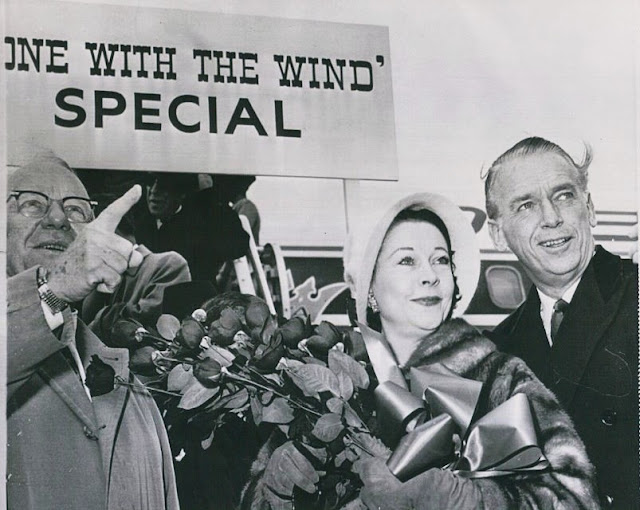 Vivien arrived in Atlanta on Thursday. Joseph Baird of The Christian Science Monitor wrote: Miss Scarlett O’Hara of Gone With the Wind  fame came home after 20 years of wandering in foreign parts, and the people took her to their hearts like a long lost daughter.

After disembarking, she received a bouquet of red roses from Mayor Hartsfield. Douglas Fairbanks, Jr, who was in Atlanta for the special occasion, also greeted Vivien at the airport. On the list of activities for the day was a visit back to the Cyclorama with Olivia de Havilland. Vivien had originally toured it on her first visit to Atlanta. Also on the list was a scheduled press conference. For this event, Vivien wrapped herself in a mink coat and capped her head in an amazing –you either love it or hate it (I love it!)– hat. 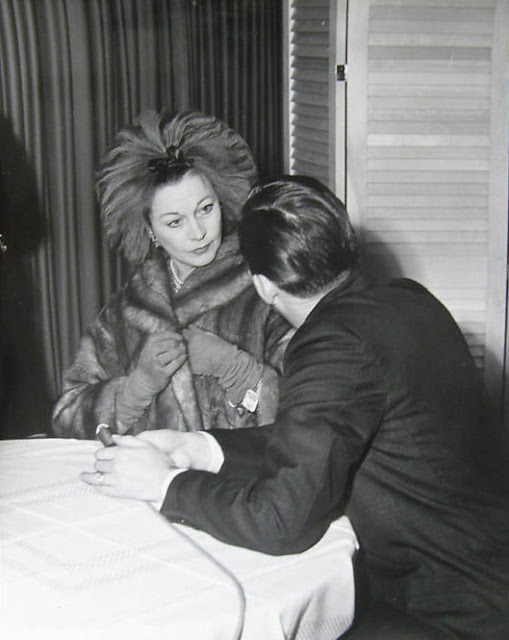 This was a much easier press conference as all these reporters knew whom she’d played in the movie. Vivien called herself a middle-aged Scarlett and discussed her upcoming world tour with the reporters on hand. One question that Vivien was asked, How did you, as a British actress, manage a convincing Southern drawl?  She replied, I just studied it for two weeks. She was also asked about walking away from that press conference in New York. She said she felt sorry for him because he had never read such a marvelous book. I love the book and I love Scarlett. 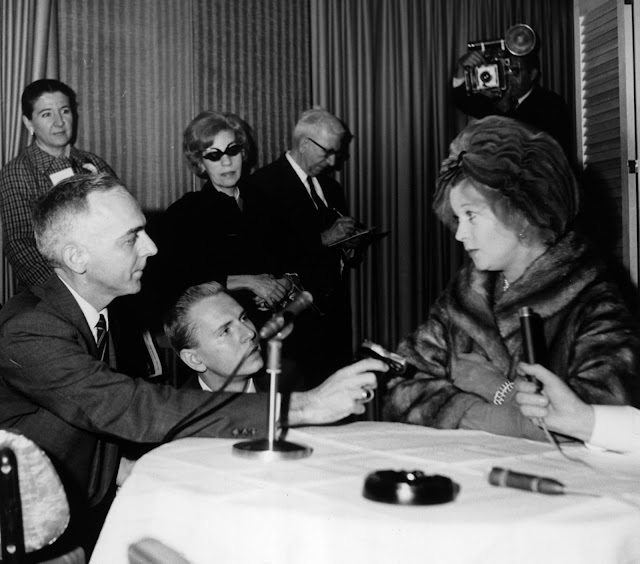 On Thursday night, a costume ball was held at the Biltmore Hotel, hosted by the Governor of Georgia, Ernest Vandiver. Antebellum skirts swooshed through the hotel as ladies dressed up in crinoline dresses and the men dressed up as Confederate soldiers and gentlemen of days past. Douglas Fairbanks, Jr, recited part of Stephen Vincent Benet’s Pulitzer Prize winning, epic poem about abolitionist John Brown, titled John Brown’s Body.

Vivien wore an original ball gown, specially created for the 21st anniversary gala. One source that I have says the dress was made from satin, while another says it was made from silk. In either case, the white gown had a billowing skirt, which trailed behind Vivien when she walked. The dress featured a green velvet waistband with flowing ribbons down the backside of the skirt. 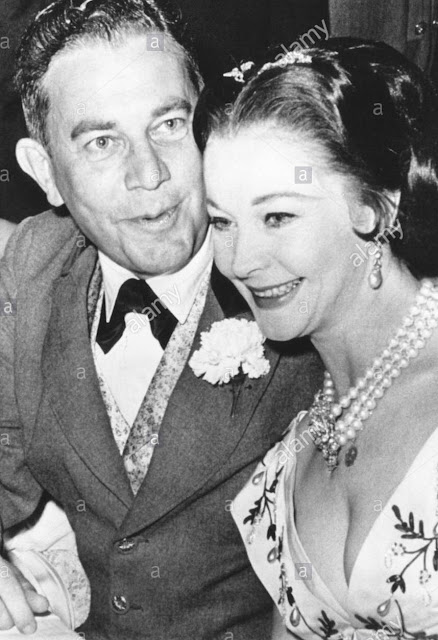 The very fitted bodice showed off the gown’s gorgeous embroidery. Green-blue sprays of flowers were embroidered onto the gown and peppered with pearls and rhinestones. Vivien’s accessories for the evening included a three strand pearl necklace with a diamond drop pin around her neck, while diamond hair barrettes adorned her coiffure. She topped the gown off with long gloves and a fox fur wrap, both white to match her dress. 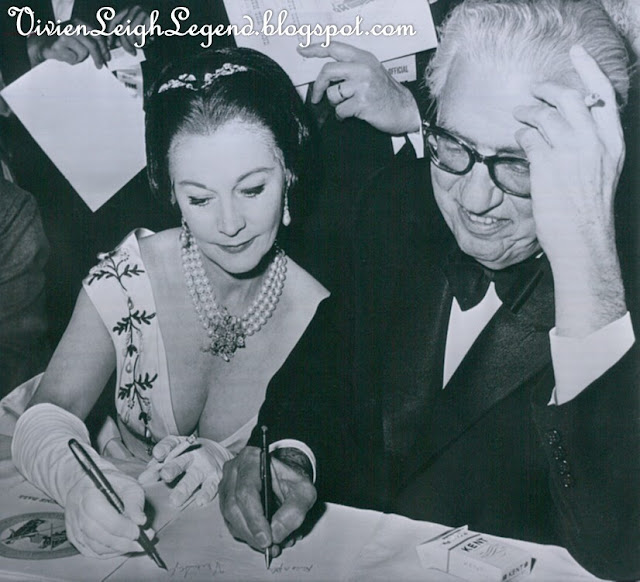 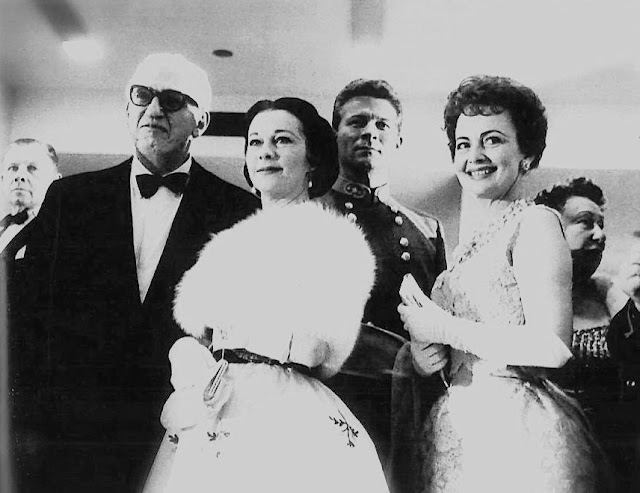 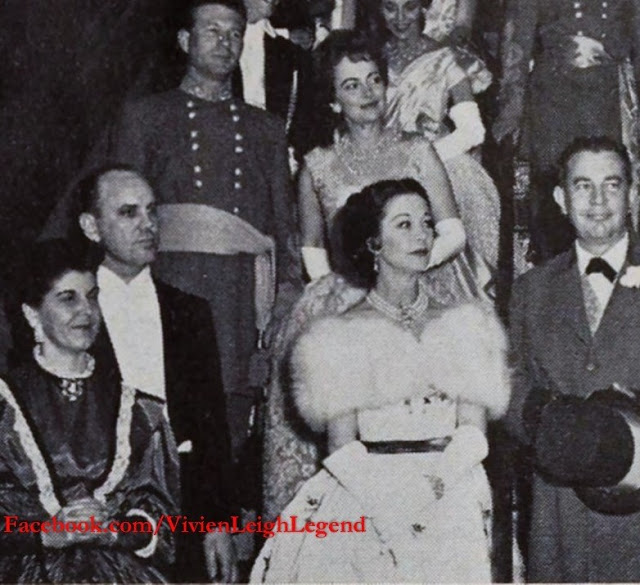 The next evening Gone With the Wind re-premiered at the Loew’s Grand theater– the same theater where the epic movie had its original premiere back in 1939. George Murphy played Master of Ceremonies. 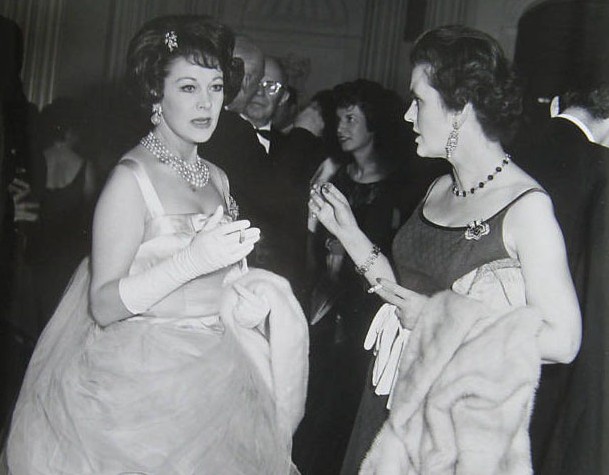 On a special platform, Vivien told the crowd that It’s wonderful… it’s wonderful to be back. Her gown of choice for the evening was a sleeveless, white number with a small bow on the bodice. The ball gown featured sheer layers over the skirt, gathered in the back, for a cascade effect. She paired her dress with long white gloves, pearls and a brooch. 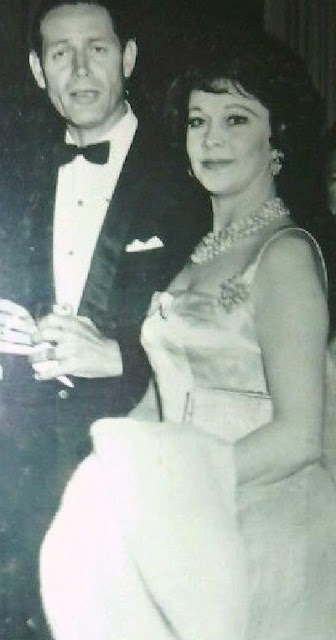 David Selznick presented a leather bound copy of the Gone With the Wind script to Mayor Hartsfield (who had also been mayor in 1939), along with portraits of Margaret Mitchell and Clark Gable. The portraits were unveiled by Vivien Leigh (for Gable) and Olivia de Havilland (for Mitchell).

This last picture is a screenshot from a youtube video on the festivities in Atlanta. From this angle, the side of Vivien’s dress is visible and one gets a partial glimpse of the backside of her gown.

Thanks for joining me for this week’s Fashion Friday post!

Fashion Friday #13: The Lady of the Camellias