Evil Under The Sun is a 1982 murder mystery, based on an Agatha Christie book with the same name. The movie was adapted for the screen by Anthony Shaffer and directed by Guy Hamilton. Peter Ustinov once again utilizes the little grey cells as Christie’s Belgium sleuth, Hercule Poirot. 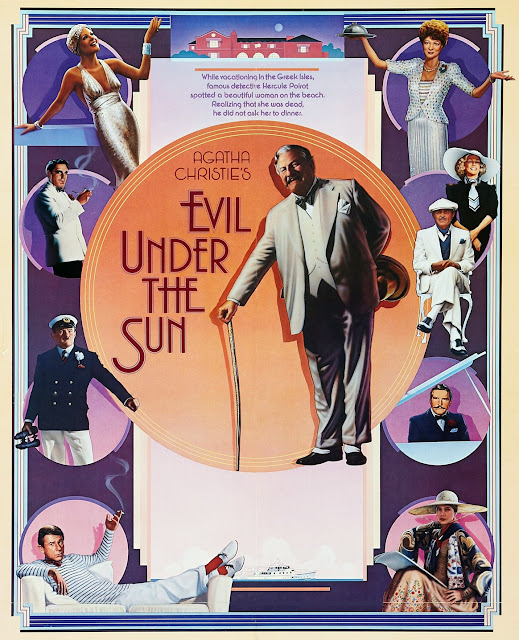 The setting for this whodunnit is an island situated off the coast of Albania and the year is 1937. When the King of Tyrania decided to marry, he gave his former mistress an old summer palace. She turned it into a resort and named it Daphne’s Place. The movie is actually filmed on location on Majorca, a Spanish island in the Mediterranean.
We begin with a death on the moors and Hercule Poirot is called in to investigate. Sadly, he can’t find the perpetrator of this murder, but the insurance company he works for has another assignment for him. Sir Horace Blatt (Colin Blakely), a millionaire industrialist, wants to insure a diamond brooch, but the brooch he sent in is a fake. Monsieur Poirot is sent to find out why. Sir Horace shares with Poirot how he met a stage actress named Arlena (played by the fabulous Diana Rigg) who left the play she was starring in to run away, across the ocean, with him. He gave her the brooch as an engagement gift, but then she met someone else on board and dumped Sir Horace for her new love, to whom she is now married. As Sir Horace says, a diamond brooch is too much to pay for three days fondling on the high seas.
Sir Horace and Hercule agree to meet at Daphne’s Place, run by Daphne Castle (Maggie Smith). Sir Horace is delayed by a day while Hercule arrives with the Marshalls. Arlena’s new husband is Kenneth Marshall (Denis Quilley), a widower with a teenage daughter, Linda (Emily Hone).
Soon everyone at the resort is acquainted and reacquainted.  The producers of the play that Arlena walked out on, Myra and Odell Gardener (Sylvia Miles and James Mason) are also there. They lost a great deal of money when Arlena left. Yet as the Gardeners harbor their bitter hatred, they still hope to convince Arlena to return to the stage in their new production. Then there’s Rex Brewster (Roddy McDowall), a shallow gossip columnist, who’s written a scandalous biography of Arlena, but can’t get it published without her release. 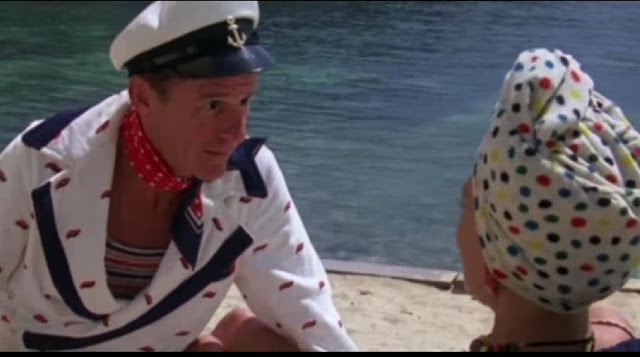 The proprietress, Daphne, is an old acquaintance of Arlena’s and the two had once tread the boards together. Smith and Rigg have some delicious dialogue in the movie. Daphne on Arlena: She could always throw her legs up in the air higher than any of us [pause] and wider. The two actresses play very well off each other with their catty remarks. Daphne also knows Kenneth Marshall, who’d been at the resort three years ago after the death of his first wife. The last guests are the Redferns, Christine and Patrick (Jane Birkin and Nicholas Clay). The Redferns argue a great deal and it’s made clear from the beginning that Patrick is an adulterer. 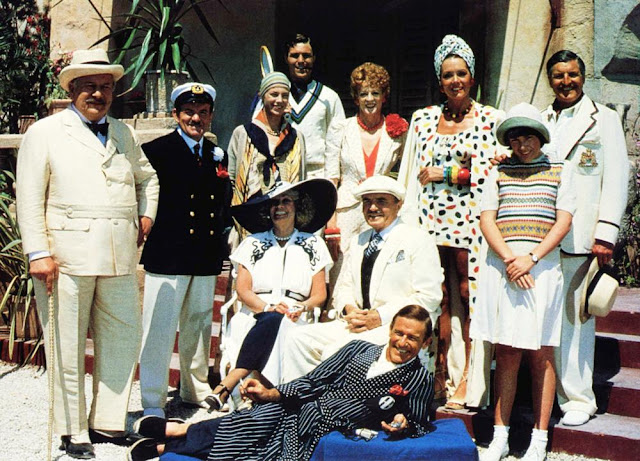 The cast of Evil Under The Sun— Standing: Peter Ustinov, Colin Blakely, Jane Birkin, Nicholas Clay, Maggie Smith, Diana Rigg, Emily Hone and Denis Quilley; Sitting: Sylvia Miles and James Mason; Reclining: Roddy McDowall
Unfortunately, one of these characters will be murdered shortly and it will be up to Hercule Poirot to figure out who the killer is before he or she leaves the island. The biggest obstacle for determining the murderer is that everyone has an alibi. 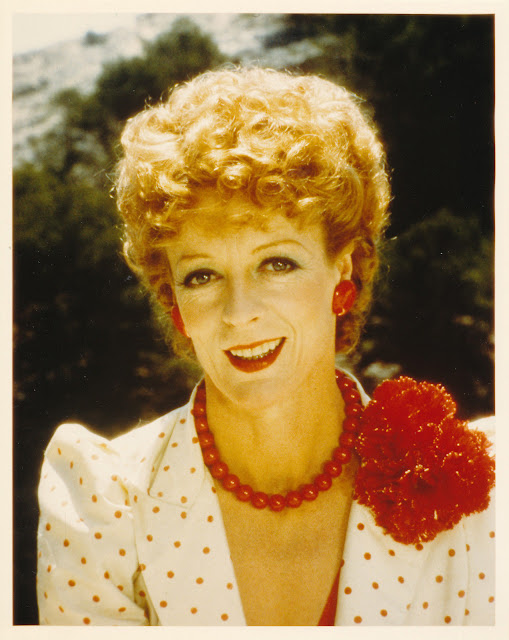 Daphne: You mean nobody did it?
Poirot: And yet we still have a body, madame.
The costumes in this movie are almost another character. They are visually stunning in color and style. The costumes were designed by Anthony Powell and created by: Barbara Matera, Germinal Rangel, Bermans & Nathans; hats were made by Freddie Fox and Woody Shelp.
Diana Rigg wears no less than three swimsuits: a polka dot kind of print; a red one with a white leaf design at the neck; and a white one with a red Chinese hat. 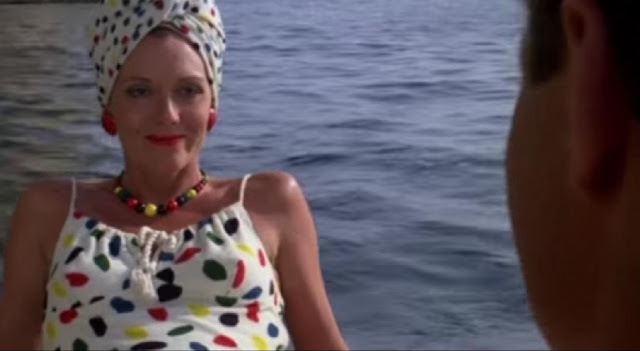 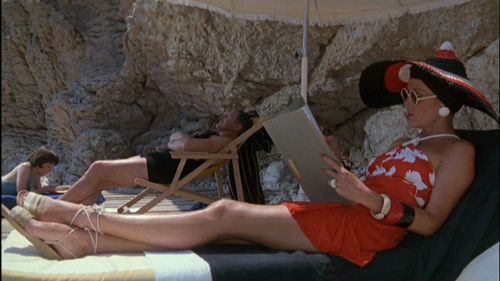 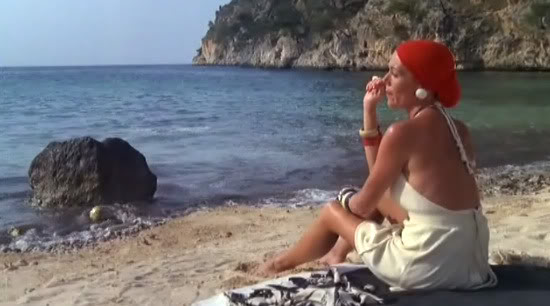 Jane Birkin is so plain and dowdy in this movie, it’s hard to believe that Hermes named a purse after her. She plays a shy and timid wife, always nagging at her husband, yet bending to his will. Christine Redfern has delicate skin and burns easily in the sun, hence the head scarves, long sleeves and long skirts. Everything is billowy on her and centered in the beige family.
The opening credits are not to be missed as they feature the fine artwork of Hugh Casson, while the film is filled with the music of Cole Porter. There’s even a scene where Arlena sings You’re the Top, with some help from Daphne, of course. 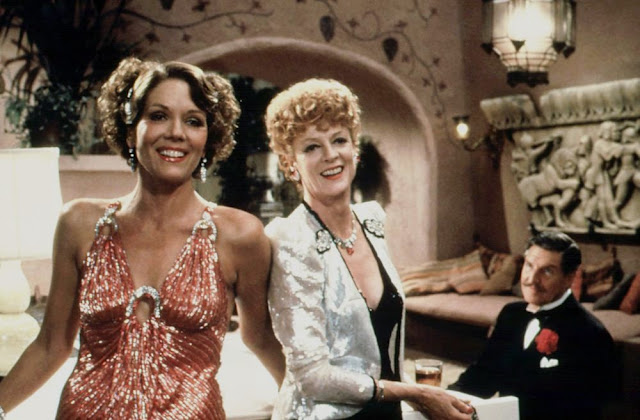 Besides the costumes and music, there’s the amazing photography of Christopher Challis. Challis takes full advantage of the natural beauty of Majorca. You can almost feel the heat from the sun, hear the gentle lapping of the water against the shore and taste the salty air, all through the lens of his camera. There are glorious shots of the Mediterranean with the light bouncing off of the water and the island’s cliffs become a place one aspires to hike.

Ustinov is absolute perfection as the brilliant, picky, Belgium detective. He’d previously tackled the role of Poirot in the 1978 movie Death On The Nile (and would later reprise the role in four more movies). The summation Poirot gives is a not-to-be-missed scene. As the murderer says, Poirot is the well-known romancer and teller of tales.

This is one of my favorite Agatha Christie movies. It’s well worth watching if you’ve never seen it. I really can’t discuss the plot in more detail without giving away the victim or the murderer, because quite frankly, that’s half the fun of a whodunnit.

The most notable side-effect of watching Evil Under The Sun is that after viewing, you may want to pack your bags and head off to Majorca.

This post has been my contribution to The Beach Party Blogathon (click here for more entries). Thanks for stopping by!