This week I walk along the row of portable dressing rooms on the “Command Decision” set. Signs upon the doors proclaim the names of famous occupants: Clark Gable, Walter Pidgeon, Brian Donlevy, Charles Bickford and so on.

There are few sounds of life from within the dressing rooms. Only Walter Pidgeon is standing outside. He is talking in desultory fashion to some other men.

Clark Gable’s door is ajar. I peer in. Clark is sitting in a chair pointing a small German camera at a mirror. He sees me and grins. “How conceited can you get,” he says, “taking your own picture?” 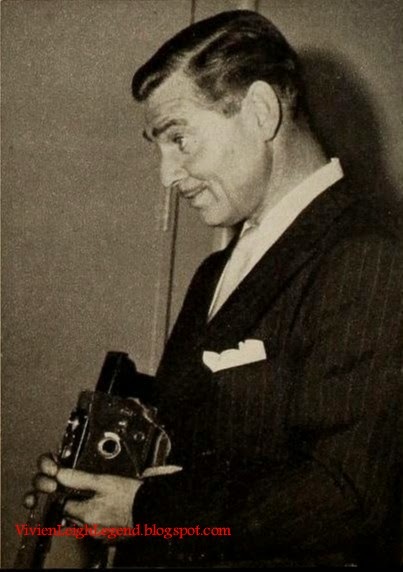 I come in at Clark’s invitation and flop down in a red leather chair. One of the MGM photographers is giving Clark some pointers on the camera, which Gable will take along on his trip to Europe. [Clark will sail to England on July 9th aboard the Queen Mary, but his vacation will be cut short due to his father’s death on August 4th].

Hanging on the wall, to Clark’s right, is the best proof in the world of his lack of conceit. It is one of the most exaggerated caricatures of Gable and his ears that has ever been drawn. It’s been hanging in Clark’s dressing rooms since he made “Honky Tonk.”

This is the first Gable picture with an all-male cast. “How does it feel?” I ask.
“Very strange,” says Clark, “let’s not have this happen again.”
“Nobody to talk to between scenes, huh?”
Clark flashes that famous smile. “I’m not crippled, am I?” he asks. “I can visit the other stages.”

An assistant pops his head in the door. “We’re ready, Mr. Gable.” We go out to the set, a command headquarters of an American bomber squadron in England, and I watch director Sam Wood rehearse a scene.

Almost everybody is in it except Marshall Thompson, one of the younger members of the cast. He sits beside me. On his coat is a string of ribbons. Marshall examines them curiously. “Gee,” he says, “I’ve sure been around, haven’t I?”

Out on the set, Gable and Pidgeon now are lighting up big, fat cigars. “I thought you had quit smoking,” I yell to Walter. “That was cigarettes,” he shouts back, “And I haven’t had one in five days.”

Gable is puffing gingerly. It strikes me that I have never seen him before with a cigar in his mouth. He wanders over toward us and I ask him about it. “Don’t tell anybody,” he says, “but I smoke a cigar about once every four years.”

“Did you hear about Mickey Rooney?” I ask. “He got dizzy on [a cigar] the other day on the ‘Words and Music’ set.”

“You’re a big help,” says Clark. Suddenly, he looks over my shoulder and his eyes snap with interest. I crane my neck. Four pretty visitors have come onto the set. You guessed it. That’s the last I see of Gable. 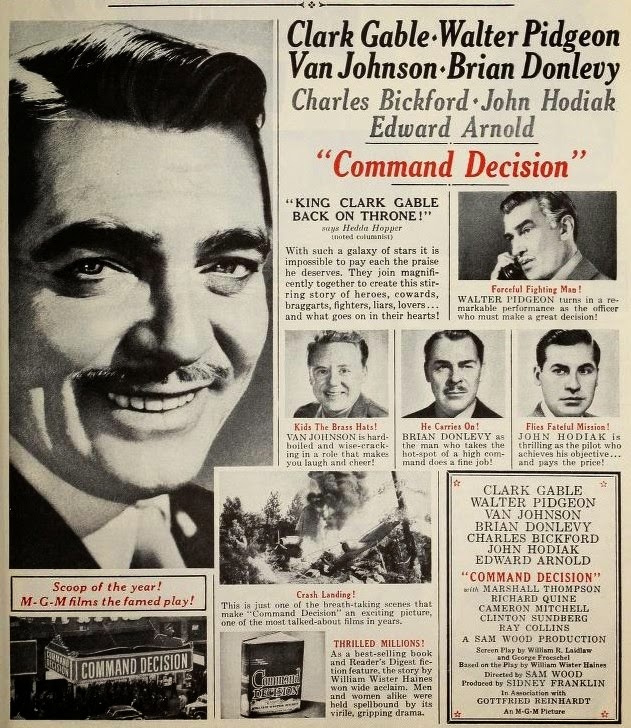 Gone With the Wind Auction Highlights