Motion Picture Magazine, 1932
by Elisabeth Goldbeck
He looks a bit like Ronald Colman, which isn‘t exactly an accident— but that’s where their resemblance ends. Laurence Olivier is younger, livelier and more impulsive- and he’s had all sorts of acting experience. Moreover, he’s desperately in love- and acts it on the screen. Can you think of anything that will hold him back?

Laurence Olivier up to now, has been known to movie fans chiefly as the man who looks like Ronald Colman. Great prophecies for his screen future have been made on the basis that he’s a younger and livelier edition of the reticent Ronnie. He has just turned twenty-four.

Naturally, Laurence hates this kind of publicity, though he admits that on the screen there is a striking resemblance between them. This came about because Laurence played Ronald’s part in Beau Geste on the London stage.

The English public had been mad about Colman in the picture version, Laurence explained, so the producer thought, in his whimsical way, that it would be well for me to look as much like him as possible. He told me to do so, and first of all to grow a mustache and cut it like Colman’s.

This he did, with the aforementioned results. But it would be too bad if Laurence were to be regarded as a claimant for Colman’s honors. He has too much charm and individuality and talent of his own to deserve such a fate. And, moreover, the two men are really not in the least alike— except for that general similarity which all well-bred Englishmen seem to have.

Laurence is taller, and slimmer, and more impulsive, and livelier, and not one-tenth as mysterious. His eyes are blue, instead of brown. He’s happily married, and didn’t have any parental opposition to his stage career, and he’s gregarious and accessible. Really not at all like Ronnie— except in a great yen for England. 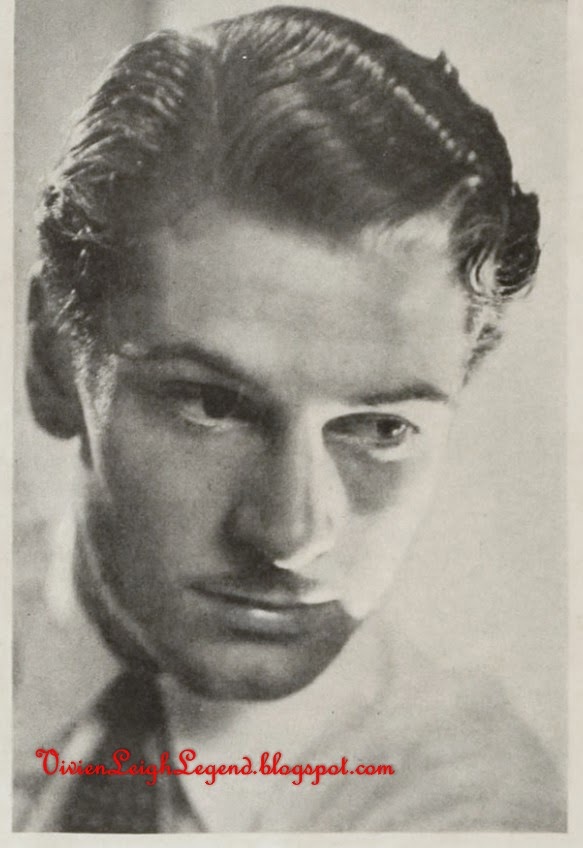 His Most Surprising Habit

He has an air of complete indifference, an isn’t-it-all-silly manner, as if everything he said and did were quite by accident, with no serious intent. He alternates between an attitude of patience and bursts of extravagant enthusiasm that cause him to throw himself around, gesticulate, give imitations, and then suddenly subside into his former inertia. Nothing in his conversation may seem to account for these wild changes of mien. It’s as if an electrical connection were made, and after sparkling a moment, abruptly broken. He seems completely flexible in mind and body. And he has that disarming characteristic of many young Englishmen—in the very nicest way, he assumes that the world is his oyster.

Laurence has been married for a year and a half to Jill Esmond (who made her talkie debut as Ruth Chatterton’s daughter in Once a Lady), and they’re terribly in love. The press agents don’t want the public to know of the marriage, because they’re afraid the fans won’t be properly thrilled when Jill and Laurence are teamed on the screen. But if the public knew how romantic they are in private, they’d be more thrilled than ever.

For instance, here’s a typical episode in the life of the romantic Oliviers. They decided to go fishing at Catalina Island. Not having much money, they borrowed some from the butler. They missed the boat, and with a total capital of sixty-three dollars, they flew over to the island.

Which Proves They’re in Love

We couldn’t afford the good hotel, said Laurence in one of his illuminated moments, so we stayed at a lovely little dump where we just slept— got nothing, not even a cup of tea. We couldn’t afford meals, because we wanted to go deep-sea fishing the next day— and that costs money. So we caught some sand-dabs, and took them into a little restaurant and asked them to cook them for us. We just acted as if they were accustomed to do that sort of thing. The next day, we went out in a boat and I caught a marlin. It was swell. I did everything wrong, the boatman was furious with me, and I didn’t deserve to catch it. In the midst of it, Jill held it while I put another reel in the camera. Later we hired a motor boat and ran into a school of porpoises, leaping about. We headed right into them and took motion pictures. That night we caught more dabs and took them in to be cooked.

After a couple of days of that, they came back to civilization, broke, sunburned, and very apologetic because the fish weighed only ninety-seven pounds. You know you have to be in love to do things like that. We had a swell time, Laurence was really flashing now, because we made our own fun. We do that wherever we go.

His Father Advised the Stage

The Oliviers met while appearing in a play together in London, where Laurence had been acting ever since he left school. He was born thirty miles from London in the English countryside, and his father was a reverend. Just an ordinary country parson, as Laurence explains. He went to public school at Oxford. And he sang in a choir in London— the same choir in which Ralph Forbes sang. All English actors started out as choir boys, it seems. Ralph, Noel Coward, Ivor Novello, Anthony Hushell, and the rest. They all gathered at Olivier’s house one night recently and sang anthems and masses, which they all knew by heart— the most extraordinary Hollywood gathering you ever saw.

At his father’s suggestion, strangely enough, he became an actor. He had always wanted to be one, so he worked hard, both at training school and in stock companies, around London. From then on, he always worked. He never missed a week. Consequently, young Olivier has a list of past experience that is simply appalling to the Hollywood mind, and cannot be assimilated all in one dose. It’s best just to say that he has had amazingly thorough training, in every conceivable type of part, from irresponsible youth to dashing old roues. Of late, however, he has specialized in the romantic kind.

He was the original Captain Stanhope in the London production of Journey’s End, and played in Noel Coward’s Private Lives both in London and New York. It was during the New York run of the latter that both he and Jill received picture offers. Laurence couldn’t decide offhand whether to accept RKO’s proposition or not. His indecision passed for caginess, and each time he hesitated they made him a better offer, until at last, with no lawyer to guide him, he signed a contract with all sorts of desirable provisions and promises, and plenty of leeway for returning to the stage each year, if he had the urge.

His Screen Career to Date

Laurence was to have had his screen start as Pola Negri’s leading man in her comeback picture, A Woman Commands. But with one thing and another, production was delayed, so he was rushed into the romantic lead of Friends and Lovers, opposite Lily Damita. And then, just when the Negri picture was ready to start, he contracted jaundice. When he bleached out, they loaned him to Fox for The Yellow Ticket, in which—perhaps because he was English— he seemed to make Elissa Landi act more natural than in any previous picture.

And that’s about all, sighed Laurence, lapsing into his patient mood, except that I think American cops are unbearably rude. It wasn’t hard to rouse him, once that subject had been mentioned. It’s very hard for English people to get on with a certain kind of American. It’s mostly the lower classes. They seem to resent the English. These Irish cops, for instance — and all cops do seem to be Irish— hate Englishmen. If a traffic cop stops you, when he finds you’re an Englishman, he becomes hard-boiled and says insulting things that he wouldn’t be allowed to say in England. It must be because of our accent. They think anyone who has one is trying to be high-hat. Many Americans are annoyed because the English speak their language in a way that they can’t understand. They forget that, after all, it’s the English language— spoken the way it was originally spoken.

How Americans Amaze Him

Another reason some Americans resent us is because so many undesirable English people have come here and represented themselves as being typically English— very high-hat and ill-mannered poseurs, who have prejudiced everyone against us. Just as we think of the typical American as a millionaire, very crude and noisy, with a long black cigar in his mouth, and horrible manners. Some Americans have manners so much better than the English that they make me feel, ‘What should I do now? How should I act?’ But most English people have no conception of what a nice American is like.

What amazes Laurence most is the casual way in which Americans are always traveling to the end of the earth and back. My home is only thirty miles from London, he said, but when my family goes up to London, they take days to prepare. They pack and fuss and stew and get as excited as if they were going around the world. The whole house is in an uproar. I wish you could have seen their faces when I first told them I was going to America. They all had a stricken look, as if I were about to be lost forever. I kept saying, ‘It’s only four days across, you know,’ but they regarded it as a frightful journey.

And, of course, now that I’m in California, they haven’t the remotest idea where I am. This is just too far for their imaginations. It’s all very hazy and mythical. If I am any prophet at all, Laurence will be in the mythical land for some time to come. He is exactly the hero you pictured in a hundred English novels. You can forget about the resemblance to Ronald Colman. Young Mr. Olivier will get along on his own merits.

30 Things You May Not Know About Gone With The Wind