The Oscars are almost upon us, so I thought it would be fun to look back to when Gone With the Wind swept the awards’ ceremony. The 12th Annual Academy Awards took place on February 29th, 1940, at the Coconaut Grove, located inside the Ambassador Hotel.

1. David O. Selznick and his wife, Irene, hosted a pre-Oscar party at their home on the day of the Oscars. They had invited all the nominees and their guests from Gone With the Wind. When it was time to leave for the Oscars, David jumped in the first car with some of the guests, which included Vivien Leigh & Laurence Olivier, completely forgetting about his wife. Irene was so mad that when she finally made it to the Oscars, (on her own), she refused to speak to David for the rest of the night.

2. At the Oscars, Bob Hope, in his first gig as Oscar host, joked that it was “a benefit for Dave Selznick” and that Selznick should’ve worn roller-skates, since he came up to the podium so much.

3. Gone With the Wind swept the Oscars, winning eight competitive Oscars and two special awards. The nominations were as follows: 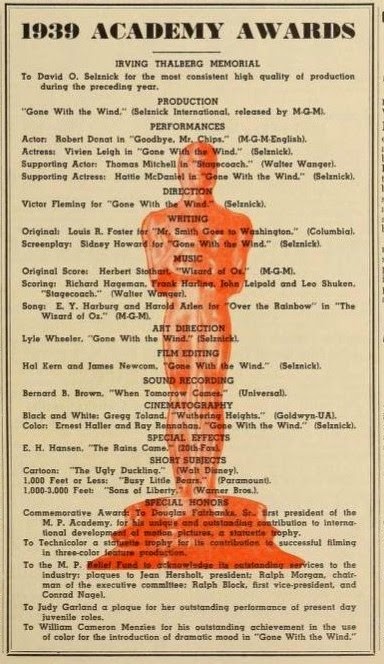 Additional Awards:
Special Award: William Cameron Menzies, for outstanding achievement in the use of color for the enhancement of dramatic mood in the production of “Gone with the Wind.”
Irving Thalberg Award: David Selznick

4. Clark Gable and his wife, Carole Lombard, skipped the Awards ceremony. The Los Angeles Times leaked the winners beforehand, so one reason Gable and Lombard may not have attended is that they knew he hadn’t won Best Actor for his role in Gone With the Wind.

5. Victor Fleming also skipped the Academy Awards, saying he was too sick to attend.  David Selznick accepted the award on his behalf. The next day, the Academy had all of the winners report for photo ops with their statuettes.

6. Y. Frank Freeman was asked to present the award for Best Picture. Freeman joked, The only reason I was called upon to give this honor is because I have a Southern accent. Upon handing Selznick the award, Freeman said,  I never saw so many soldiers as were used in “Gone With the Wind.” Believe me, if the Confederate Army had that many, we would have licked you damn Yankees.

7. When David Selznick accepted the award for Best Picture, he must have been feeling a little sorry for Olivia de Havilland not winning the Best Supporting Actress Award. While on the podium, he said that for Olivia’s brilliant work, the picture might have fallen apart.

8. David O. Selznick’s Oscar, for  Best Picture for GWTW, was sold at auction in 1999 to Michael Jackson for $1.54 million. This is the highest amount ever paid for a statuette.

9. Hattie McDaniel received a standing ovation upon her arrival at the Oscars. Hattie wore a blue dress with a gardenia corsage along with gardenias in her hair. Her date for the evening was Ferdinando Yorba.

12. Vivien Leigh arrived at 9:30pm, but didn’t receive her Academy Award until 1:15am.  When she returned to her table, Bette Davis, nominated for Best Actress for Dark Victory, congratulated Vivien on her win.

13. When Vivien Leigh returned to England at the end of 1940, she left her Best Actress Oscar in the states with her good friend and secretary, Sunny Lash. She didn’t collect it until 1950, when she returned to Hollywood to film  A Streetcar Named Desire. At the time, she said it was too heavy to cart back to England.

14. Vivien Leigh’s Gone With the Wind Oscar was sold at auction fetching $510,000 in 1993, at that time, the highest amount ever paid for an Academy Award. It’s now part of the James Tumblin Collection.

15. A shot of the interior of the Coconaut Grove, located inside the Ambassador Hotel on Oscar night, 1940. Hattie wasn’t allowed to sit at the Gone With the Wind table, so she and her date sat to the side of the room. They can be seen in the lower right of the photo.

Thanks for joining me for today’s post!
P.S. You might also enjoy the following:
11 Things About Vivien Leigh & the Oscars
Fashion Friday #9: The 12th Annual Academy Awards
Previous